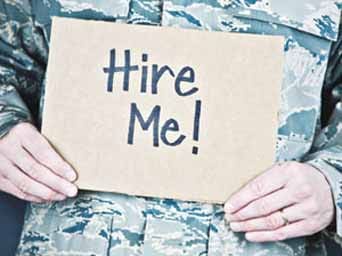 He dressed the part in business casual, armed with a folder full of resumes. He said he was optimistic but still concerned about job prospects for veterans.

As a post-9/11 veteran, Enyart is part of a group that had a 9.7 percent unemployment rate as of September, well above the overall unemployment rate of 7.8 percent, according to the U.S. Bureau of Labor Statistics.

The overall unemployment rate for veterans was 6.7 percent for September.

His service allowed Enyart to realize a childhood dream of becoming a firefighter, but since leaving the Army recently he isn’t holding out for a firefighting job. His goal is a career but also paying the bills.

“There’s dreams and then there’s reality,” Enyart said. “I’ve got that wife and two kids at home that are constantly motivating me.”

There is also a tax credit up to $9,600 for hiring veterans with service-related disabilities who have been unemployed for more than six months.

But the problem is educating businesses, especially small businesses, on the incentives, said state Sen. Leah Landrum Taylor, D-Phoenix, who serves on the Senate Veterans, Military and Government Affairs Committee.

“It’s just putting that thought process back in the minds of those who have the power to hire,” she said.

U.S. Rep. Ron Barber, D-Tucson, who serves on the House Armed Services Committee, said helping veterans find work has to be a community-wide effort. He said one solution is job fairs, like the one attended Enyart attended, sponsored by the U.S. Chamber or Commerce and the organization RecruitMilitary.

Another solution, Barber said, is part of the VOW to Hire Heroes Act: a Transition Assistance Program providing mandatory career counseling and resume-writing workshops for all veterans transitioning to civilian life.

“A veteran who was trained in the military has a specific skill-set,” Barber said. “They may not realize that they are very capable in other ways.”

At the job fair, Somer Fite, who served in the Navy around the time of the first Gulf War, said her experience, along with a college degree, launched a career in government work. She said she wasn’t too concerned about finding a new job but worries about those who served in Iraq and Afghanistan.

“When you have vets who are coming back and having to go on food stamps and Section 8 housing, that’s a real problem,” she said. “For as many veterans to be unemployed today as there are is just mind-boggling.”

Enyart said the character traits he developed in the military, not just the job he was trained for, give him an advantage in the job market.

“We all have so much leadership potential,” he said. “Sometimes they don’t realize that it’s already within themselves.”