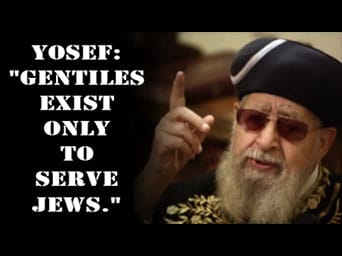 Judaism, like all of the “revealed”/hearsay man-made religions, breaks the people of the world down to “us versus them.” In Christianity and Islam the “us” are the believers and the “them” are the non-believers. In Judaism this also holds true to a point. However, in Judaism much importance is placed on being an ethnic/racial Jew and not merely a religious Jew. For example, a person who has a Jewish mother but who does not believe in Judaism is considered by Judaism and religious Jews to be a Jew.

Many people who consider themselves Jews do not accept the religious teachings of Judaism. A good example of this is Albert Einstein. In his famous “God letter” to the Jewish philosopher and author Erik Gutkind regarding Gutkind’s book Choose Life: The Biblical Call to Revolt,  (PDF) which is about the Hebrew Bible/Old Testament and the God of that religious text in which the Hebrews/Jews are held out to be chosen by God “above all people that are upon the face of the earth” (Deuteronomy 7:6), Einstein wrote, “Still, without Brouwer’s suggestion I would never have gotten myself to engage intensively with your book because it is written in a language inaccessible to me. The word God is for me nothing more than the expression and product of human weakness, the Bible a collection of honorable, but still purely primitive, legends which are nevertheless pretty childish. No interpretation no matter how subtle can (for me) change this. … For me the Jewish religion like all other religions is an incarnation of the most childish superstition. And the Jewish people to whom I gladly belong … have no different quality for me than all other people. As far as my experience goes, they are also no better than other human groups, although they are protected from the worst cancers by a lack of power.” (Israel’s brutal abuse of the Palestinians, etc., etc., etc., has proven they are no longer “protected from the worst cancers by lack of power.”) “Otherwise I cannot see anything ‘chosen’ about them.” (Einstein was referring to the Bible god in his response to Gutkind’s book, and not to Nature’s God.)

On page 146 of Gutkind’s Choose Life: The Biblical Call to Revolt we see just how racial/ethnic Judaism is. He wrote, “Here again is a basic difference between Judaism and the religions. The Jewish faith is inseparably bound up with the Founded People. We are not dealing here with a set of dogmas, or a behavior, or a church, or a corpus mysticum. Only the people can reach the state of holiness. The individual must reach the people. To be uprooted from the people is the Jewish conception of death.” In other words, “race is of primary importance.” This topic is covered extensively in Abraham’s Children: Race, Identity, and the DNA of the Chosen People by Jon Entine. Entine quotes the Jewish “British” Prime Minister Benjamin Disraeli as saying, “All is race, there is no other truth.” Entine goes on to write, “Jewish identity managed to survive only because it has continued to embrace the notion of tribal identity, rather than defining itself strictly by doctrinal beliefs.”

This sense of race/ethnicity of Judaism can go a long way in explaining why the Hebrew Bible/Old Testament is so loaded with hate for Gentiles and why it teaches Jews a false sense of Jewish superiority.

Why else would the Hebrew Bible/Old Testament teach Jews that it is wrong for them to own fellow Jews as slaves, but it is good for them to forever own Gentiles and our children as slaves as it does at Leviticus 25:44-46? This one teaching by itself makes it crystal clear Judaism is an enemy to humanity. This is in perfect agreement with the former official Chief Rabbi of Israel Ovadia Yosef who said in a radio address in 2010, “Goyim were born only to serve us. Without that, they have no place in the world – only to serve the People of Israel.”

Not only does Judaism teach that individual Gentiles/Goyim are placed on Earth to serve Jews, it also teaches that other nations are to serve the Jewish nation of Israel. And what happens if a Gentile nation refuses to serve Israel? According to Isaiah 60:12 the Jewish god said, “For the nation and kingdom that will not serve thee shall perish; yea, those nations shall be utterly wasted.” It makes you laugh until you stop and realize Israel has nuclear, biological and chemical weapons stockpiles along with a growing fleet of submarines that can deliver its WMD virtually anywhere on Earth.

When we read Numbers 31:17-18 which has the Jewish “holy” man Moses ordering the Israeli army to “kill every male among the little ones, and kill every woman that hath known man by lying with him. But all the women children, that have not known a man by lying with him, keep alive for yourselves” we immediately realize Judaism is a real and present danger to all of humanity. This order from Moses and the carrying out of this order by the Israeli army makes it very obvious what kind of religion Judaism is and what kind of nation Israel is. This Bible-based sick and twisted mentality should also make it easier for us to grasp the raw terror the Palestinian people are forced to live under and how morally wrong it is for the US government to support Israel and its bloody aggression against the Palestinians.

To me, the best way to remove the threat of Judaism and all religious violence is found in the words of the American founder and Deist Thomas Paine. In his powerful landmark book on God, Deism and religion, The Age of Reason, The Complete Edition, Paine called for a revolution in religion based on our God-given reason and Deism. This will be a long struggle, however, it is probably the only permanent solution to this very real and deadly problem.