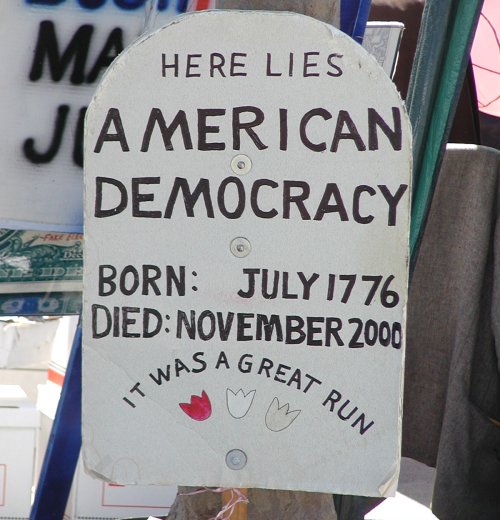 This election day, whoever you vote for, dress in black to mourn the death of democracy.

Bev Harris of BlackBoxVoting.org suggests that you wear the color of the party you’re voting for on election day: blue for Democrat, red for Republican, green for Green, and so on. She says the black box voting machines, many owned by Mitt Romney, cannot be trusted to count your vote. So the only meaningful way to express your political preference is through the color of your clothing.

But I say: Let’s dress in black for “black Tuesday” – to mourn the death of democracy.

Wear black to mourn the death of real choice in American elections.

Wear black to remind everyone that black-box voting machines do not count votes, they fabricate election outcomes.

Wear black in solidarity with black Americans, whose votes have been repeatedly stolen since the 15th Amendment supposedly enfranchised them.

Wear black to mourn the murders of JFK, RFK, MLK, Paul Wellstone, and Karl Rove’s top 2004 computer-geek vote thief, Mike Connell, who was killed shortly before he was scheduled to testify in court against Rove for stealing the 2004 presidential election.

Wear black to mourn the murders you are paying for – the murders of millions of innocent people in Iraq, Afghanistan, Pakistan, Somalia, Palestine, Iran, and elsewhere – murders that will continue, paid for by your tax dollars, no matter who wins the election.

Wear black to mourn the fact that you have been made a murderer by your so-called government.

Wear black to mourn the fact that your Constitution is a dead letter.

Wear black to mourn the fact that you and your compatriots are too cowardly to do anything about it.

Whoever you vote for, whether or not you even bother to vote, by dressing in black for “Black Tuesday” you’ll be sending a message:

“We know that the American people do not have a real choice in this election.”

“We know that our democracy is dead.”

“We know that our press is completely controlled, and that the ‘news’ is Orwellian propaganda.”

“We know that our government has murdered the truth.”

“We mourn the passing of this once-decent country.”

“We mourn the countless victims of this evil regime.”

When the truth is dead, when goodness is dead, when evil reigns supreme and unopposed, the least that good people can do is mourn.

If we do not protest – if only by wearing black on “Black Tuesday” – it means that our own minds, hearts, and souls are as dead as our defunct democracy.

– Kevin Barrett will discuss the death of American Democracy with Bev Harris of Black Box Voting on Tuesday, election day, 11 a.m. to noon, on NoLiesRadio.org .

“Man In Black” by Johnny Cash

Well, you wonder why I always dress in black,
Why you never see bright colors on my back,
And why does my appearance seem to have a somber tone.
Well, there’s a reason for the things that I have on.

I wear the black for the poor and the beaten down,
Livin’ in the hopeless, hungry side of town,
I wear it for the prisoner who has long paid for his crime,
But is there because he’s a victim of the times.

I wear the black for those who never read,
Or listened to the words that Jesus said,
About the road to happiness through love and charity,
Why, you’d think He’s talking straight to you and me.

Well, we’re doin’ mighty fine, I do suppose,
In our streak of lightnin’ cars and fancy clothes,
But just so we’re reminded of the ones who are held back,
Up front there ought ‘a be a Man In Black.

I wear it for the sick and lonely old,
For the reckless ones whose bad trip left them cold,
I wear the black in mournin’ for the lives that could have been,
Each week we lose a hundred fine young men.

Well, there’s things that never will be right I know,
And things need changin’ everywhere you go,
But ’til we start to make a move to make a few things right,
You’ll never see me wear a suit of white.

Ah, I’d love to wear a rainbow every day,
And tell the world that everything’s OK,
But I’ll try to carry off a little darkness on my back,
‘Till things are brighter, I’m the Man In Black.