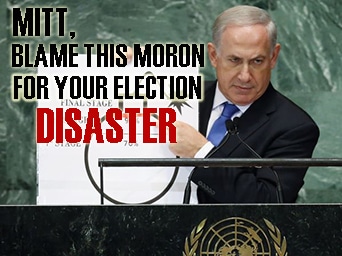 Former President Bill Clinton had it right with his “cookie jar” analogy about Romney.

“When Romney is caught with his hand in the cookie jar, he just keeps grabbing more cookies.”

America does some really dumb things but running an organized crime boss for president, and a bumbling wimp of one at that, this had gone too far.

What we can tell you is that the senior active and retired intelligence and top law enforcement and DOJ professionals, the drug enforcement officers, they are the ones that beat Romney, not the Obama campaign.

They wouldn’t allow Romney to turn America into something even worse than the seemingly hopeless mess we have now and moved.

Probably the worst scam in the entire election was the accusations made by a few stooges, some former military, sold out to organized crime, that accused the president of murdering an ambassador in order to try to lose the election.

Add to that a phony corporate media who never attempted to dig out who paid for ex-CIA Rev. Terry Jones’ all day Muslim rant webcast that cost millions of dollars.

This was a smoking gun that the whole thing was the expected October surprise, and took us only a day to find out who all was involved. Data mining is a wonderful thing.

These stories need to be kept and whenever one of these phony military fatass types tries to cash in, they need to be shut down. Veterans Today’s archives are backed up on proxy servers off shore and can never be ‘disappeared’, hacked or firebombed.

Then we have Hannity, Dick Morris, George Will, Newt, and, don’t forget poor Sheldon “Kiss of Death” Adelson who thought he bought five states for Romney and got none.

Then we can see how well the Israel lobby did, New York is solidly Obama and, as of this writing, Florida is in play, a state that was supposed to be solid Romney territory with his Cuban connections.

Oops, we forget.  Romney got burned for his Castro meetings.

The other upside is that the Israel lobby is now where it belongs, toothless, its massive influx of illegal cash into race after race and voters in almost ever case went the other way.

Cuba, the recent revelations, burned Romney more than we suspected.  We ran the story, pushed to do so at the last minute but didn’t think it would get solid distribution.

We were wrong.  We simply published, others put it in the hands of key political figures and squashed Romney’s backing in several key political and ethnic groups.

Our intel friends were busy in more areas also.

They leaked Romney’s ties to blood diamonds, money laundering, his ties to Castro and the cartels in Mexico and Columbia.

They even leaked his mistress, a Russian/Cuban spy name Maria Perez Andropov.

A few days before the election, what may actually be the best we have, a flawed lot I admit, but including key members of our military, moved on Romney and Netanyahu and, and, and…

There was no real worry about the bumbling fool Netanyahu attacking Iran and walking into the buzzsaw from hell.

It was all about manipulating oil and gas futures through controlled news and childish hysterics. Billions were made by the select few, the GOP fatcats, and the American people took it up the rear as usual. It was all a game.

Romney wouldn’t have lasted, the presidency would have killed him.  He looks healthy, or did at the beginning of the campaign.  He is not, not mentally fit nor physically strong.

What we saw here was a failure, an attempt to put a lizard with a bow tie in the White House.  We can’t allow this again.

We can no longer accept the government under these circumstances, the money in politics, the rule by special interest, the war for profit and the imposed third world slavery that the American people are expecting their grandchildren to face.

Obama doesn’t get off the hook. He is now free to do all those thing he promised.

As for those who supported Romney or in Ohio, Josh Mandel for Senate, a total freak, and so many other unqualified pieces of human garbage seeking to grow fat on the blood of America’s workers and soldiers, get some help.  Some of you, and we can’t be divided over politics anymore, have acted like total asses.

You were given a competent choice in Obama and a total freakshow of galaxy-wide nutcase.  As with elections since 1996, racism, blatant idiocy, rumor mongering and simple knuckle-dragging stupidty built a strong neocon criminal element into what seemed like a political party.

The “tea party” cemented every crackpot and degenerate in America into a solid core of meth snorting illiterates.

We still have more than a few in the house where they are more than capable of doing great harm to the country as they have the last two years.

What time is it? It is time we started putting criminals in jail rather than congress. Obama was elected for this task and we want him to start with vengeance. I can think of two supreme court justics that belong behind bars today. If only….

The fun followup will be the wild conspiracy mongering that has already begun on Fox News, claiming ACORN and the Black Panthers rigged the election.

It is a reasonable estimate, not without some backing, that 5 million votes were flipped to Romney through software hacking, ballot box stuffing and simply destroying ballots.

A note, Jane Rosenstein and Didier Lambert of our Paris Bureau were with the GOP group night before last…4 people…and, last night, with the Democrats.  We will be looking at the French reaction, photos and exactly what an 80 Euro per person dinner in Paris is like.

Our thanks to both parties for their hospitality.  In Europe, they hunt us down, here…despite the fact we are the largest active veterans group and, by miles the most politically effective, we continue to be minimized.

Veterans don’t need cigarettes, booze and bingo.  Americans don’t need a police state.  If government doesn’t want to hear the unpleasant truth, it can change or we will find a way of removing it.  We didn’t take down the criminal cabal around Romney and his Bush associates by ourselves but we were a third of that effort, done without one cent of fund raising.

We had Americans with us. Again, my thanks to all that stood with us at VT, numbers I would never have imagined.  I am humbled. Please post all election conspiracy theories in the comment section.