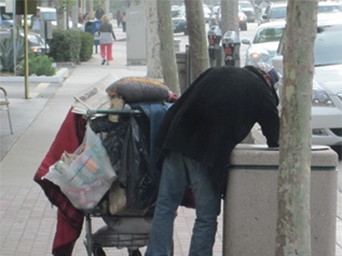 “Never doubt that a small group of thoughtful,

committed citizens can change the world.

Indeed, it’s the only thing that ever has.

The one-page Resolution calls on the President to re-appropriate $20 million previously designated for fixing up the vacant and vermin-infested Building 209 on the VA grounds and re-designating the funds for the immediate establishment of provisional housing and benevolent care with full support toward the “Homeless Veteran Humanitarian Relief Project” that was initiated by the Veteran advocacy group.

Building 209 is projected to be completed two years from now and will house only 52 Veterans at a cost of nearly $400,000 per room.

Outraged over the disproportionate over-spending for so few, the Veterans group claims the $20 million would be more effectively spent providing immediate shelter and care for thousands of disabled and needy Veterans in Los Angeles, our nation’s capital for homeless Veterans.

The elderly group also criticized the VA for funding a multi-billion-dollar-a-year welfare rent and food stamp program to warehouse homeless Veterans in ramshackle apartments in seedy neighborhoods run by unsavory slum-lords instead of building permanent housing on the VA grounds as specified in the Deed of 1888.

They also requested President Obama to direct his Department of Justice to drop its embarrassing defense in the ACLU’s lawsuit against the VA for misusing Veterans property and abusing disabled homeless Veterans.

The Veterans respectfully remind the President that taking care of our disabled homeless Veterans is not a legal challenge but a moral responsibility and subsequently requested him to immediately settle the lawsuit in favor of Veterans and begin building a new and modern National Veterans Home.