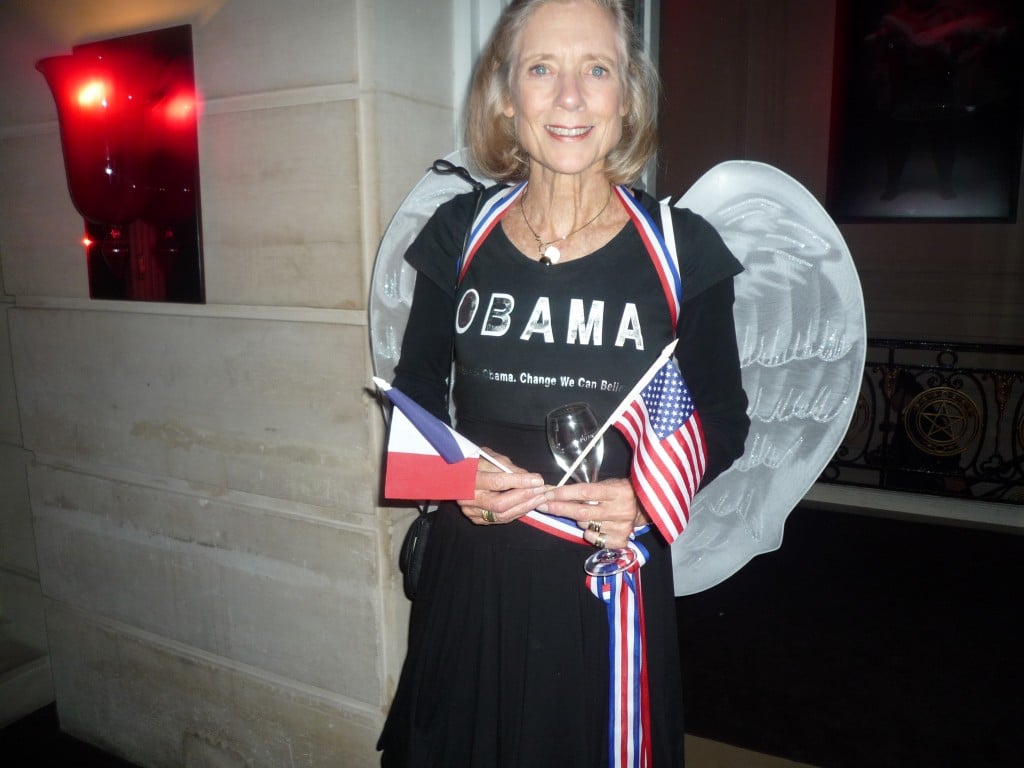 On Election Day, November 6, 2012 in  Paris, there was an  elegant Election Night Party at Pershing Hall . Connie Bourde from Democrats Abroad Paris Chapter and Tom Mc Grath  from Republicans Abroad Paris Chapter sent an out invitations. Eva Assayag  from Pershing Hall organized the gala event. People paid an entrance fee of 80 Euros to attend and over  300 attended. Democrats Abroad is very active in Paris and has a large membership with many events. They work hard to encourage Americans living in Paris to vote and are active for many causes.

Pershing Hall is located at 49 rue Pierre Charron near the Champs-Elysées.

It is an elegant 5 star hotel with 26 rooms .  Its history is fascinating. It as built at the end of the 18th century for the Count of Paris as a home for his mistress. Then in 1917 John Pershing entered into the mansion and it served as his headquarters for him as he was in charge of the Allied Troops in France during WW1.

The party was elegant indeed.  We  thought it was organized by the large active chapter of Democrats Abroad here but it was open to all There were several waiters and waitresses serving food and all guests were offered 2 free drinks.  The large TV screens gave everyone a chance to see the results of the elections via CNN. All  enjoyed the mounting tension as it was a close election. Everyone enjoyed the ambiance.

We met other journalists.Greg Keller an American living and working in Paris as a business writer for  Associated Press was there to cover the event.  We enjoyed talking with him. Later in the evening we met Tarek Kai, a journalist from Monte Carlo Doualiya.

First we were attracted to Marion Elizabeth Herwood  a Democrat from Missouri whose sister made her a hat decorated with several buttons. She introduced us to her French friend, Zaza,  owner of ZaZa  Bar in Montmartre. Elizabeth came to Paris as a student and worked for the Herald Tribune:  She joined the American Legion’s Auxiliary when an American lady she met said she might get an economical  flight with the group back to USA. She told me that although the Veterans own the building and the land, she gets refused when she calls to book events for the American Legion Auxiliary.

Then we met a lady dressed as an angel: Katherine Converse.  She adapted a girl from Uganda.  She is a Democrat and was cheering for Obama. She thinks that USA veterans are great and very brave.

Looking for some Republicans in a crowd that was 90% Democrat was not easy but we saw some of them sitting at a table in front of  a large TV screen. Tom Mc Grath from the Republican party told  us that Romney would be a better President and thought that the main issue was the economic problem in USA. He thought the House would be Republican and the Senate Democrat.

After meeting these people it was time to listen to music. There was country, rock, live singers and a DJ. Although the entertainment was good most were looking at the large TV screens.

Next we met Janice Elessie,   a singer who comes from Washington, DC and her husband. Sylvain.  Janice wore a beautiful Obama T shirt and told us that she is a Democrat and an Obama fan. She said that the party was very different from the one in 2008 and that she came with her husband to enjoy being with others and sharing the excitement of the event.  Obama, she said, would be a good president because he is concerned about health, women’s health and ecology.  Asked  about how she felt about Veterans she said she said that she has a great respect for them.

Then we met a member  of the Parti Libéral Democrat in Paris, Aurélien Véron. He  felt Romney would bring back the values of the  founding fathers and bring more freedom. He felt Obama was more for welfare and feared the economic debt.

At almost 6 A.M. when the crowd was ecstatic about Obama’s impending victory announced by CNN, we left the party. Both of us agreed we had a great evening with Americans and their French friends and spouses.  It was great to spend the Election Night with others.  So one American and one Frenchman went away feeling happy about meeting so many good people and seeing the election results on TV.