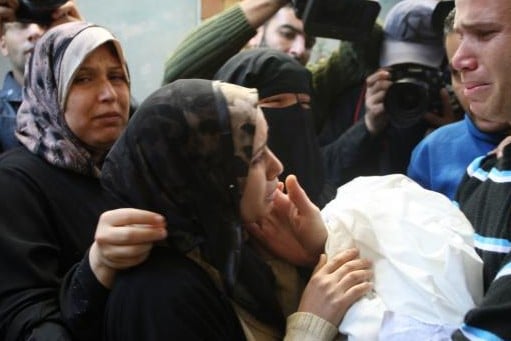 Mr. Morsi, yet another savage massacre is underway across the Egyptian border in the besieged Gaza and you heard Israel’s lapdogs and lapbitches across the pond howling in unison at Palestinians and justifying their killing by Israeli army.

They say Israel has “inherent right to act in self-defense to protect its citizens against acts of terrorism” without even whispering what inherent rights, if any, Palestinians have to defend themselves against Israeli state terrorism, what rights they have to defend their property against demolitions and usurpation by Israel or what inherent rights 1.6 million Gazans have to break out of Israeli six-year long siege. However, give them credit for their allegiance to whatever they believe in, rightly or wrongly. This has been American official policy, no matter whatever the party or color of the American President because Zionist lobbies holding their strings have only one color and code — Israel.

Nevertheless, there are millions of ordinary Americans (Christians and Jews) who cry for justice to these oppressed Muslims and root for an end to the inhuman treatment of the Palestinians in general but those of Gaza in particular by the rabid Zionists in Israel. Obviously they can not be expected to go beyond expressing their pain and anguish, and may be peaceful protests at the most.

But what about you, President Morsi, and your new Egypt?

Recall those heydays of revolution when millions of Egyptians would gather in the Tahrir Square every day and every night demanding not just the ouster of Pharaoh Hosni Mubarak but severing ties with Israel and America. It wasn’t Muslim Brotherhood cadre alone but Egyptians of all hues and every standing. Who should know it better than you why they were demanding shunning Israel and America.

Mediating truce between Hamas and Israel or pulling out your ambassador from Tel Aviv means nothing for the Israeli killing machine. Your predecessor too used to broker truce whenever such a need arose. Indeed he enjoyed power for four decades for forcing Palestinians submit to Israeli occupation and suppressing Egyptians against standing up to Israel for its cruelties against Palestinians through such truces.

Truce has always helped Israel in squeezing Palestinians more and more both in Gaza and in the West Bank and Al Qudus. It allows Israel kill, demolish and usurp more and more land unhindered. As an example, according to the UN, from 1 January to 6 November this year alone, Israelis have killed 71 and injured 291 Palestinians against none killed and 19 injured in on Israeli side. That was truce time. And then every truce has followed with wholesale slaughter of Palestinians. Cast Lead – truce – more continual killing, demolitions and land grab by army and settlers — fresh slaughter (over 40 killed, more than 300 injured and counting by the time of this writing when land offensive has not yet started).

Beating the same path doesn’t do justice, neither with the revolution that brought you and your Party to power nor with the suffering the Muslim Brotherhood and cadres of other Islamic parties endured for decades in the cause of achieving primacy for Islam in the Egyptians’ life and rule.

As a leader, President Morsi, the current massacre of Palestinians in Gaza at Israeli hands is a litmus test for you and what you are supposed to do under the circumstances as a true human being and as a true Muslim.

It is time past mere moral and diplomatic support. It is time past expecting any justice from UN and its propertiers. If they didn’t fix the problem in sixty-four years, they have every reason not to solve it in another sixty-four decades. Palestine is not East Timor or South Sudan. It is Muslim problem. They have already declared war on Muslims. And they have powerful collaborators from among Muslims on their side.

But for Iran and Syria, “Muslim” kings, kinglets, elected or otherwise dictators of every sort would have long ensured Zionists achieve Greater Israel. Palestine is their (collaborator’s) trump card against American demand for democracy and against their own people.

Yes, you have gone a step further than the American poodle Pharaoh Hosni Mubarak by withdrawing Ambassador from Tel Aviv and sending your Prime Minister to Gaza. But to what real difference? Even while Hisham Qandil was inside Gaza, Israel continued bombing (mercifully not his motorcade) and killing people notwithstanding assurance of halt to military action during his visit. Not without a reason.

And the reason: Israelis have full measure of every Arab leader. It knows what makes Abdullah’s, Hamad’s and Erdogans dance to Zionist tune. For these collaborators, Zionist Jews are friends and Shia Muslims enemies because it helps them be buddies with America. When tears were still flowing down the faces of the family members of the 9 Turkish activists killed by Israeli army on MV Mavi Marmara, Erdoðan and Davutoðlu were back hand in hand with Netanyahu planning removal of the major roadblock to Israel’s aim of Greater Israel, Bashar Al Asad. Trial of Israeli army officers and all that is crap for public relations exercise. Isn’t it Turks who in the first place really gifted Palestine to Zionists! The same Turks refused to label Israel “aggressor” in 1967 and refused to go by OIC decision severe Zionist entity. Ruling party may have changed but the mentality and the pivot of Turkish politics unfortunately remains the same. Erdoðan is no different from Adnan Menderes.

In your case, it is annual US military aid, though very much doubtful to keep coming given American economic distress. The other, and of very immediate consequence to your administration, is your request for IMF aid. It won’t come your way without yielding concessions to Israel after all it is to be finally decided by America, and American decision depends upon how well you please Israelis. Remember if Hosni Mubarak mattered in any American equation it was just because his services were important to Israel.

So, President Morsi, unless and until you and your Government do not throw Egyptian begging bowl and stop looking for American crumbs and favors, you have very limited options but to leave Palestinians at the mercy of Israeli savages, however solemnly and sincerely you may wish to help these hapless Muslims.

Please consider how has American military aid has helped Egypt except for entrenching army generals and lining their pockets? Mubarak’s begging bowl has made Egyptians cowards and this very cowardice has emboldened Israel to act against Palestinians as it pleases.

Muster courage and break the Egyptian begging bowl and assume the role you rightly deserve in leading the Arab world.

In your support to Syrian opposition you have shown allegiance to Syrian Muslim Brotherhood. Move a step forward and show allegiance to the clear command of Allah, which warrants you to “fight in the cause of Allah and of those who, being weak, are ill-treated (and oppressed).” (Al Qur’an, 4:75).

There is nothing like “homeland” for a Muslim. Ummah is all that matters for a Muslim. For a true Muslim, safety and security of Ummah is far more important than the safety of “homeland.”

When Israel doesn’t need to stick to its commitments why should Egypt? If American can stop committed aid or Israel can stop tax revenue due to Palestinian Authority for one or the other reasons, why can’t Egypt immediately stop, to begin with, gas supply to Israel for a genuine and obvious reason.

If America doesn’t feel constrained in arming Israel (against ????), why should Egypt feel shy in providing some useful pieces of arms to Gazans when they really need them.

There is no need to feel afraid of Israeli military might or its American support. It is hype like the “impenetrable” Iron Dome. Look at Afghans – Soviet Union is long gone and America along with its European allies is gasping for breath. Doesn’t that prove you the promise of Allah.

Time and again Afghans have proved fighting a superior army doesn’t need bombers, tanks and the rest of high-tech armaments. All it needs, first and foremost, is willingness to die.

Like Afghans, ordinary Palestinians (as against their PA leaders), in particular the Gazans, have repeatedly proved they don’t fear death. If they can shoot home made rockets and scare Israelis to death, they can equally fire better ones, if they have. They need material support. Let Israelis know time has really changed and there are people who would practically stand shoulder to shoulder with Palestinians in their fight against oppression, and will repay every Palestinian massacre with return Israeli massacre.

No truce this time, please, President Morsi. Let Palestinians die, so would Isrealis. Palestinians have been dying in any case, be it war or truce. Let them die this time for a purpose. Conditions are promising for the long awaited solution to the Palestinian problem, if, and it is a big IF, you, President Morsi, show real courage and leadership expected of a true Muslim.