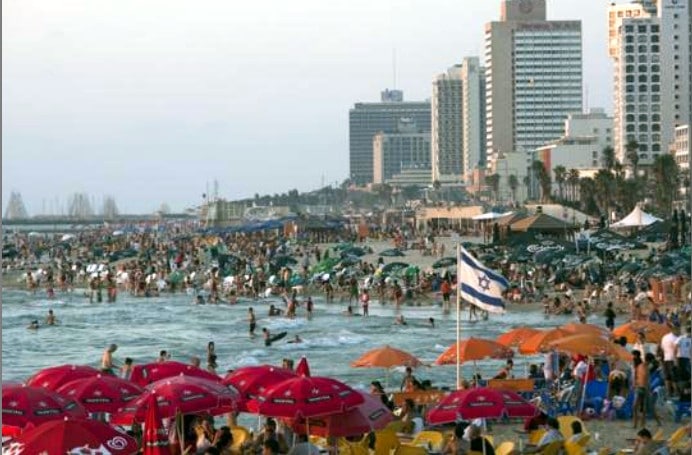 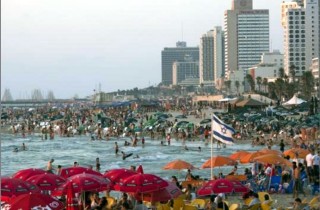 The mission ahead is the building of a solid concrete roof over the entire Jewish State. PM Netanyahu is determined that the only way to defend Israel’s populated area is to cover the Jewish State with a thick layer of iron and cement.

The Israeli Government’s decision to build a concrete roof followed a considerable debate within the cabinet. Defence Minister Ehud Barak insisted that a massive extension of the current Security Wall would be enough to provide the goods. Barak maintained that a substantial increase of the wall to the height of 90,000 ft. would be more than sufficient to stop missiles from entering Israeli territory. He sensibly argued that Israeli youngsters would benefit from seeing the blue sky when they raise their eyes above. Prime Minister Netanyahu couldn’t agree less.

Being fully aware of the nature of ballistic warfare, the PM contended that the only way to provide the Jewish State with the ultimate security is to cover it from above with a reinforced concrete shield. Israeli President Shimon Peres, the legendary peace enthusiast, offered a compromise inspired by the idea of a trampoline. Peres suggested that a Security Wall’s 90,000 ft. extension made of an elastic net would do the job.

The elder statesman argued that an elastic net will guarantee that every Palestinian missile aimed at Israel would bounce back to the Arab territory once it hits the net. Netanyahu and Barak dismissed Peres’s suggestion. They argued that considering the excessive Israeli usage of artillery and missiles against the Gazans, the Jewish State would suffer far more from the erection of such a ‘bouncy net’. “Israel,” said Barak, “would never survive the extent of its own fierce artillery barrages bouncing back on itself.”

In a press conference following the heated cabinet debate, the Government spokesman Mr Zion Zioni stressed that “following the total success of the Security Wall in stopping Palestinian suicidal terror, ‘Security Roof’ is obviously the natural way to proceed.” Mr Zioni maintained as well that the new Israeli project will turn the Jewish State into a “sealed Jewish Bunker”. “In fact,” Zioni emphasised, “‘Operation Security Roof’ brings the Zionist adventure into its final destination.

We are now moving from the ‘Iron Wall’ phase into the ‘Concrete Roof’ future. With a reinforced concrete ceiling from above, a Security Wall in the East and the Mediterranean Sea in the West, the Jewish State will eventually become the safest haven for world Jewry. Herzl’s dream comes true. Long Live Israel!”

Yet, some technical difficulties lay ahead. Probably the most crucial problem has something to do with breathing. Like the rest of the humankind, most Israeli people consume oxygen and release carbon dioxide. Apparently, the Israeli cabinet Ministers were made aware of this very crucial fact by the Health Minister Dr. Herbal Krechtzen.

Netanyahu, being a man of action, responded immediately. Already in the cabinet meeting he authorised the Defence Ministry to explore different solutions to the acute biological problem.

We already learned from the Defence Ministry spokesman Lt. Galileo Galilee that ‘Filter On The Roof’, the Israeli-American High Tech chemical giant (traded on Wall Street, operated from Gush Katif) has been contracted to deal with the problem. We have learned as well from Lt. Galilee that Filter On The Roof has already come up with more than a few solutions.

Although some of the solutions are rather radical, it is crucial to mention that they are all extremely innovative, as you would expect from an Israeli-American High Tech venture. Probably the most conventional and practical solution proposed by the chemical giant was to bore as many as 6 million ventilation holes in the roof. Peres, Netanyahu and Barak rejected the possibility without even thinking twice.

“Considering our traumatic collective memory of the holocaust,” so they said, “turning the Jewish State into a big room with holes in the ceiling is simply unacceptable.”

Probably the most radical suggestion made by the Israeli-American company was to train the Jewish population in Israel to breath like fish. By the time the Israeli people are well trained, all that is left to do is just to fill the Jewish bunker with seawater.

In other words, Filter on the Roof suggested to turn the Israeli State into a ‘giant Jewish tropical aquarium’. Though this option seems to be very radical and even inconceivable, most cabinet Ministers reacted enthusiastically. They all agreed that such a solution would fit nicely with the concept of modern Jewish life in general and Zionism in particular. Israelis love the sea. Israelis, unlike the Diaspora Jews are not afraid of water. Once the entire Israeli society is covered with water, no one would ever consider throwing them to the sea.

We will be following this developing story and keeping you informed.