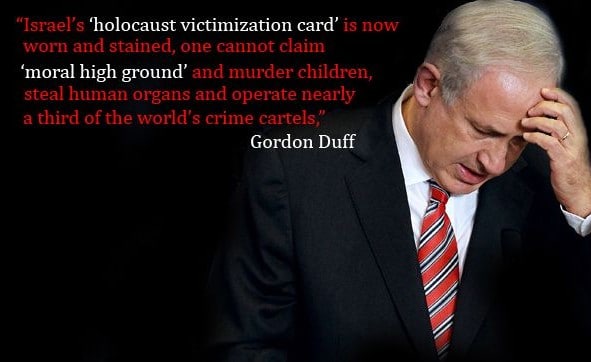 ‘No place left in world for anachronism of wars, Israel’

“The GOP, the “true red” friends of Israel are now “eating their own young” in a “blame fest” looking for scapegoats to explain why billions of dollars in drug money couldn’t buy an election in a nation long assumed to be filled with the ignorant and “unwashed.”

Israel is partying like they believe this were still 1982. 75,000 young reservists, schooled in apartheid and racism, a generation of young Israeli’s who know little of physical labor, nearly one million “guest workers” do the “heavy lifting now,” are physically and mentally unfit for combat.

There is a difference this time, though the military advances Hamas has made over the past few months, smuggled MANPAD air defense weapons from Libya, rockets with advanced guidance systems and double the range of anything Israel had imagined are not the telling factor.

The issue is political. Even as the words left President Obama’s mouth, his statement of eternal support for Israel and their right of self-defense, he faces Israel as an enemy, perhaps more so than the people of Gaza do.

It is not just Netanyahu’s continual attempts to rig America’s presidential election and his colossal failure.

Netanyahu is clueless as to what is heading his way.

Polls during the recent election showed that American Jews care little or nothing about Israel. In fact, Israel is looked on as a nation of “free loaders” and increasingly is seen as “not worth the bother.”

Only so much whining is paid attention to. The photographs of dead Palestinian children are far more common now and the continual flow of stories about Palestinian terrorists the Israel lobby foists on the American public are no longer being accepted.

It has, at least during the past two years, become increasingly distasteful to peddle Islamophobia and racism. Political awareness has grown in America. Romney and Netanyahu made sure the election was very much about Israel.

Israel lost as much as Romney lost.

Then there is the reality “on the ground.” Israel can invade, they have the weapons, they have the manpower. What they do not have is the power of the press behind them.

Oh, the press is still there but few take the “pop culture media” as seriously as they had before. CNN and Fox, the American networks most inclined toward obedience to Tel Aviv, now only preach to a minority of disaffected and broken supporters of a failed political movement in total disarray.

The GOP, the “true red” friends of Israel are now “eating their own young” in a “blame fest” looking for scapegoats to explain why billions of dollars in drug money couldn’t buy an election in a nation long assumed to be filled with the ignorant and “unwashed.”

America turned out to be something different, a nation sick of being lied to. Time changes things. During my childhood, I watched America go from hating those of African descent along with Jews and Catholics to a nation where, at least in states that support Obama, where the vast majority of Americans live, race and religion are no longer the judge of character.

Things have changed “on the ground.” Though Morsi, in Egypt, has sworn to keep to the Camp David Accords, the people of Egypt will not allow an invasion of Palestine to go unanswered. If Morsi fails to act, it will seal his doom and bring an end to the accords.

Israel will have an enemy on her southern border.

Israel has depended on Jordan to act as a “hand puppet.” We are now seeing the first moves to eliminate Jordan as an Israeli pawn.

That will put the issue of West Bank settlements in a new light as they are built on land stolen from the people of Jordan. There will be a new government in Jordan, an Islamic government, it will come and it will no longer be able to suppress its two million Palestinians, nearly a quarter of who still live in refugee camps.

The roots of radicalization are there and it may not be in a month or two months but Jordan will fall and the desire to settle issues of “right of return” are less likely to be put to verbal or written negotiation.

Though the Western press has long suppressed the stories, the Saudi monarchy is weakening, Israel’s primary surrogate in the Middle East, though, depending on how the “wind is blowing,” Erdogan of Turkey can no long be seen as weak or complicit in Israel’s acts.

His rhetoric and failure to do anything but join Israel in moves on Syria, joined by the French, joined by Israel and serving as lapdog to his NATO masters, is not unnoticed.

It is believed by many that an American offer to lift sanctions in trade for stringent nuclear inspections has already reached the preliminary agreement stage between the United States and Iran. Israel has, we are told, indicated it will not oppose such an accord.

They will not because they cannot.

Without the issue of Iran as their “bloody flag,” Israel is likely to be forgotten, their nuclear weapons useful only as an assurance of the impotence of a minor nuclear power. Iran understands this issue well.

The Zionist “Sampson Option” has now become a badge of hypocrisy and has assured the people of Israel that they are watched and targeted by more than one nation that has sworn them “eternal friendship.”

There are now solid and verified reports that a coalition of rogue extremist groups within the American military and veteran community, generously funded by monies from the Gulf Cartel in Mexico, laundered through what Dr. Webster Tarpley describes as the “Mormon Mafia” and Israeli Likudists had planned to overthrow the US government by force after the election.

Sources at the highest levels have indicated that General Petraeus was to be offered the “presidency” after an iconic act of terrorism would cost the lives of top American leaders including but not limited to the President and Vice President.

There is absolutely no reason whatsoever to believe General Petraeus knew anything of this and were he to have been aware, would have moved to block such an effort.

However, during a “national emergency,” different decisions for criteria would have applied.

Jeb Bush was to have been his Vice President.

Very knowledgeable official sources surmise that a potential fallback could involve, not that General Petraeus is not available, a scenario where a weakened Secretary of State Clinton would assume the presidency, mired in a war with Iran, based on a series of assassinations and terror attacks, “pristine Iranian passports” would fall from the heavens like perfect snowflakes from a grey sky.

In order to secure Mrs. Clinton in place, Senator’s McCain and Lindsay Graham have worked to block the nomination of Susan Rice over the Benghazi affair.

What is now being noted is that all those who gravitate toward wild conspiracy theories involving the murder of Ambassador Stephens are likely complicit in a plot against the United States.

In a recent discussion with a senior counter-intelligence official, I was reminded that the key issues of the Benghazi attack are twofold:

Who gains from the attack? That answer is clear, Romney and Israel.

How convenient is the timing. We strike the same tune again, timing serves Romney and Israel.

I am also told we see the hands of State Department employees who, without their cooperation, the movements of the ambassador and his party would have been impossible to trace as well as coordinating the overwhelming attack of September 11, 2012, timed to coincide with the Terry Jones/Google/YouTube telethon meant to provide cover through purposefully staged violence.

Behind the telethon, we find the hands of the CATO Institute, their “Tea Party” through “P.J. Media and, as reported by Wayne Madsen, up to 50 senior Pentagon officers.

It was not the White House that sent the rescue force to Tripoli, four hours’ drive away while the Benghazi airport was open.

Pentagon officials had circulated a long disproven Al Jazeera story that the Benghazi airport was still unserviceable though four airlines land their daily.

Though we won’t see them testify in front of a congressional enquiry, if the real planners of the Benghazi attack were brought to justice, not those who actually carried out the attack themselves, the majority could be found living and working near Washington D.C. and closely aligned with right wing politics and Zionist causes.

Israel will attack and may invade but they are only digging a hole to bury themselves. What could have been a détente that may have brought generations of peace will more likely be a coalition of nations, not pledged to destroy Israel but destined to move through a world where Israel will no longer have a place.

Israel is a “dinosaur,” an anachronism of wars and conflicts that are fading memories. Israel is not alone, others will fall and Israel may well survive as a “homeland of the Jews” but either as a pariah nation or one willing to embrace a multicultural Christian, Muslim and Jewish heritage.