Home Veterans A defeat for Israel…? 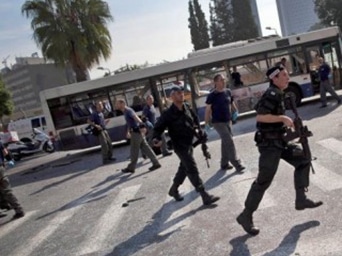 A defeat for Israel…?

It’s too soon to know whether the ceasefire between Israel and Hamas will be more than a sticking plaster to be ripped off by more violence whether provoked by Israel or not.

But while we wait for events to give us the answer, there is a good case for saying that under Netanyahu’s leadership the Zionist (not Jewish) state has suffered a significant defeat.

One small clue that Netanyahu and his leadership colleagues know this was a statement to the BBC this morning by Mark Regev, the prime minister’s Goebbels-like spin doctor. He said, “We didn’t want this escalation.” Even by Regev’s own standards that was a big, fat propaganda lie.

It was to trigger the escalation that Netanyahu ordered the assassination of Hamas’s military chief. (It now seems more than reasonably clear that he was within an hour or so of signing an Egyptian-sponsored agreement for a prolonged truce when he was murdered).

The three main reasons for believing that Israel has suffered a significant defeat are these:

In today’s Ha-aretz there is a fascinating and revealing account by Barak Ravid of what happened behind Netanyahu’s closed doors.

The essence of it was that Defense Minister Barak “wanted it” (the truce on more or less Egypt’s terms); Foreign Minister Lieberman (who subsequently changed his mind) started out “demanding a ground invasion”; and Netanyahu “vacillated”.

My own speculation is that Netanyahu finally decided that it would be too costly for Israel in diplomatic and political terms to say “No” to Obama and many other leaders who insisted that Israel had to agree to a ceasefire on more or less Egypt and Hamas’s terms in order to prevent further de-stabilization in the region.

The extent to which Netanyahu was worried about the possible consequences for Israel of saying “No” was indicated by the fact that a few rockets were fired into Israel after the ceasefire came into effect, and Netanyahu did not allow himself to be provoked into responding with more bombs and missiles.

That said it is also the case that Netanyahu’s negotiators did create some wriggle room for their master. How so? The ceasefire document is not a binding agreement. It is a list of undertakings which are still to be worked out in detail and agreed. (It has to be acknowledged that Zionism is without equal in the business of finding ways not to honour commitments it makes in agreements).

There are three main and related questions arising.

The first is to what extent will Israel actually lift its blockade of the Gaza Strip?

The second is to what extent will Egypt succeed in preventing Hamas being re-armed by smuggling even if President Morsi has the will to succeed on this front where Mubarak failed? (The nuclear-armed Zionist state insists that it must be allowed to go on expanding its arsenal with the latest weapons, actually for offensive purposes, but Hamas must not have any weapons for defensive purposes).

The third is does Hamas have the ability to prevent violent Islamic fringe groups firing rockets into Israel? (It has to be said that its ability to do so has not been helped by the assassination of its military chief).

Another interesting question is this: What impact if any will Netanyahu’s acceptance of a ceasefire on more or less Egypt and Hamas’s terms have on his chances of emerging from Israel’s January election with a stronger than ever and unchallengeable coalition majority?

According to a snap poll taken very soon after the ceasefire announcement, 70 per cent of Israel’s Jews said they were opposed to the deal, meaning, presumably, that Netanyahu was wrong to agree to it.

If that is and remains the view of a majority, we can expect to see Netanyahu aligning himself even more closely with the forces of the truly fascist right between now and the election.

In a best case scenario the ceasefire between Israel and Hamas will last and life for the Palestinians of the Gaza Strip will improve, but the fundamental problem will remain – Israel’s on-going colonization and ethnic cleansing by stealth of the occupied West Bank, the proof that Zionism is not remotely interested in peace on terms the Palestinians could accept.