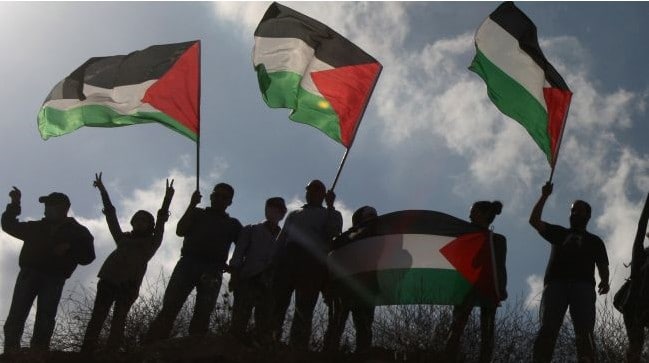 Generally, it is a “given” that the West, America, Britain, France and Germany, are oblivious to any rational assessment of any conflict involving Israel.

When 15 civilians were killed by an American F 16 bombing a civilian neighborhood in Gaza, non-Islamic leaders turned away, failing to offer what would normally be words of sympathy and respect.

Their silence, the shame of it, is easy to understand.  They have found themselves “in bed” with something unclean.

Their silence is defacto recognition of a lie.  Neither Gaza nor the West Bank or Golan Heights have been part of Israel nor was Israel mandated by any recognized international authority as a “Jewish state.”

In fact, there is no established treaty that has ever outlined any of Israel’s borders.

If one is accepted as “law,” the other should be equally considered.

In 1917, Lord Balfour had no right to speak for the Ottoman Empire, the recognized government of Palestine nor did he have authority to speak for the signatories of the Versailles Treaty two years into the future.

Two documents, both of an earlier era, have exactly the same validity, the “Balfour Declaration” and the “Protocols of the Elders of Zion.”  Both documents are devoid of authentication and though their historical impact has been immense, neither document was created by any recognized entity of standing.

The Balfour “Agreement,” between Lord Rothschild and one of his financial/gambling partners, truth be told, carried no more authority than the promise to pay a gambling debt or an overdue bill from a “bawdy house.”

The legal political status of both the West Bank and Gaza are quite clear in accordance with international law.

These are areas of temporary military occupation, limited by the UN to a matter of days (UN SC 242), as a result of the 1967 War.

No treaty awarded the land to Israel and, at no time, has Israel formally annexed these territories.

The pressing reality of Gaza is that, as part of the recognition of the State of Israel and its acceptance into the United Nations, Gaza was formally recognized as part of Egypt.

Between 1948 and the invasion by Israel in 1967, Gaza was a part of Egypt though under various schemes of semi-autonomous rule.

Were one to try to find an accurate map of Egypt or the United Arab Republic, Egypt’s short-lived partnership with Syria, surprises would be in store.

Every map available online has been “photoshopped” to remove Gaza from Egypt.  Wikipedia shows it “clipped off” when displaying maps of the UAR.

In fact, nearly every article on the history of the region has been deleted or altered to obscure the legal status of Gaza.

What is that status?  United Nations Security Council Resolution 242 dated November 22, 1967 called for an immediate Israeli withdrawal from Gaza and suspended any legal authority over that region by Israel.

However, for 11 more years, Israel maintained an illegal occupation of Gaza and other territories in defiance of the United Nations.

It was during this period that the 1973 War took place, during which Israel faced military defeat except for massive military intervention by the United States.

Misrepresented as a “resupply effort,” American pilots from both land bases and aircraft carriers flew hundreds of sorties during the conflict.

In retaliation, OPEC declared an oil embargo on the United States that crashed America’s stock markets, brought on wage and price controls and has led to the endless cascade of fuel prices Americans continue to struggle with.

The American public has, to this day, never been told the truth.

In 1978, the Camp David Accords were signed.  The framework for 242 was twofold, the implementation of SC 242, which required the total and absolute end of all Israeli military activity in Gaza, East Jerusalem and the West Bank and the establishment of a fully autonomous Palestinian State.

No aspect of SC 242 allowed for a sea blockade of what was established as an independent nation, what “fully autonomous state” means according to international law.

No part of the Camp David Accords allowed for a wall to enclose Gaza or for trade to be restricted between the Palestinian State and any nation.

One might care to ask, how a UN resolution that established a new nation was re-interpreted to create a prison camp with walls and guard towers, towers where snipers regularly fire on civilians, where bombs are dropped, homes systematically destroyed, where political autonomy and the necessities of daily life are subject to the whim of what is technically a foreign power that systematically violates the sovereignty of a smaller neighbor.

Let us be very clear, Gaza has never been a part of Israel.

Let us be very clear, the UN ended any Israeli role in Gaza after a very short military occupation in 1967.

Let us be very clear, the Camp David Accords were necessitated by Israel’s unwillingness to abide by UN SC 242, a resolution that constitutes the applicable international law on the status of Gaza to this day.

Let us be very clear, the Oslo Accords of 1993 were necessitated by Israel’s unwillingness to abide by the Camp David Accords and UN Resolution 242.

The Oslo Accords have been continually misrepresented through manipulation of the press and disinformation surrogates.  The text below is that of the Office of the Historian, US Department of State:

“Although the peacemaking efforts launched by the Oslo Accords did not produce a permanent agreement, the Oslo agreements achieved several breakthroughs. The Palestinians made a significant advance toward self-government with the creation of the Palestinian National Authority, composed of a democratically elected Council with Arafat as its head. For the first time, the PLO’s status was legitimized internationally.

Israeli troops were redeployed from Gaza and Jericho and from the villages and cities in the West Bank. Despite the successes of the Oslo process, failures on both sides to fulfill commitments, internal political opposition, lack of progress in negotiating final status issues, and outbreaks of violence undermined the trust-building element of Oslo that was intended to make possible a final peace agreement. The Oslo approach to Israeli-Palestinian peacemaking efforts effectively came to an end with the failure of the Camp David Summit in 2000 and the subsequent outbreak of the second Palestinian Intifada.”

There are things to note in this text, which represents the official position of the United States:

When an accurate history of the region is considered, one that shows the 1967 attacks by Israel to have been preemptive, much as with Pearl Harbour or 9/11 or even a broad examination of Israel’s move from a multicultural nation to an apartheid state, the “engines of obfuscation” begin revving and any hope for justice and self-determination dissolves.

The status of East Jerusalem, the West Bank and Gaza are that of a sovereign nation, recognized as such by the United Nations over 40 years ago.

There are deep parallels with the narrative that is used to describe Hitler’s acquisitions of territory leading to the outbreak of World War II and the actions of Israel.  Agreements were reached and then ignored, but is “Munich” and Chamberlain’s failure really an honest comparison?

As horrific as it sounds to some, we are actually being too harsh with Hitler.  You think this absurd?

Hitler’s motives and actions were all meant to repatriate lands long settled by German speaking people, people suffering persecution, lands that had been, until 1919, either German or German speaking portions of Austria/Hungary.

Israel’s land seizures are of lands they never held, though bizarre tribal claims up to 5000 years old are continually used as justification.

In fact, the lands seized by Israeli immigrants are some of the oldest continually inhabited communities on earth, lands held, in some cases for over 3000 years.

Palestinians were once Phoenicians or descendants of Alexander’s Hellenic expansion or, more the case, Semitic peoples who had been Jews, then converted Christians as were almost all in the region for over 500 years, and eventually became Muslims.

When Jews talk about the people of Exodus, those Moses led out of Egypt, are they now living in Gaza, dodging bombs?

Palestinians are among the purest of any Semitic peoples.  Are any who diminish, imprison, or plan their genocide thus the most rabid “anti-Semites?”