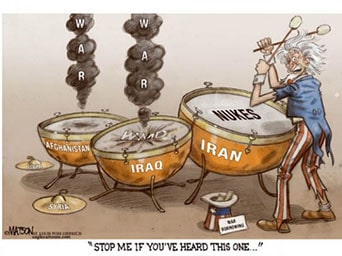 Either war is obsolete or men are. –Buckminster Fuller

Some of the important news gets reported quickly and is then forgotten just as hurriedly. The following, from CBS Chicago, reported on May 10, 2012, provides an example of an under-reported event:

“A handful of soldiers gathered Thursday morning at Vietnam Veterans Memorial Park on the Chicago River, to announce their opposition to NATO, and announce that they’re giving back their service medals on Sunday, at the start of the NATO summit.”

One such veteran, former Army Ranger Graham Clumpner, spoke to CBS of his disenchantment:

Clumpner came to the realization that haunts many veterans during or after their stints on the battlefields. Jose Narosky tagged the realization made by many, reporting that “In war, there are no unwounded soldiers.”

Why do our men in uniform start out believing that they’re “always doing the right thing, and trying to help, and save, and protect” and end up feeling deceived and disheartened.

The Greek philosopher Aristotle captured a mantra that once had merit but later became an empty slogan: “We make war that we may live in peace.”

The truth is closer to what Benjamin Franklin believed, that “there never was a good war or a bad peace.”

Our wars are no longer simply body-counts of our warriors killed or injured on the battlefield. We now must deal with what has come to be known as “Post-traumatic stress disorder” (PTSD) and with suicides.

Chaplain Mark Worrell noted that “This year, 2012, there have been more suicides in the Army than combat deaths,”

Reported Jamie Crawford: “To date, the Army has confirmed 120 suicides for both active and non-active duty soldiers in 2012 with 67 other deaths suspected as suicides, but still under investigation. Twenty-five of those were attributed to soldiers who did not have any previous deployments. The Army reported 242 suicides in 2009, 305 in 2010 and 283 in 2011.”

Comments Gen. Lloyd J. Austin III, Vice Chief of Staff of the Army, “Suicide is the toughest enemy I have faced in my 37 years in the Army.”

Adds Chaplin Worrell “The Army has been struggling to deal with the suicide problem since numbers began rising in 2004. This year, the average is nearly one soldier suicide a day.”

Nermeen Shaikh of Democracy Now notes that “The reasons for the increase in suicides are not fully understood. Among explanations, studies have pointed to combat exposure, post-traumatic stress, misuse of prescription medications, and personal financial problems.”

Explains Dr. Alex Liungerman, “People who’ve survived suicide attempts have reported wanting not so much to die as to stop living, a strange dichotomy but a valid one nevertheless… Pain mixed with guilt, anger, and regret makes for a bitter drink.”

Adds Dr. Charles Raison, “When a person is depressed, the entire world is disturbed and distressed, so there is nowhere to escape. And it is this fact that makes suicide so seductive, because it seems to offer the one available escape option.”

Observed Arthur Koestler, “The most persistent sound which reverberates through men’s history is the beating of war drums.” The best way to end military suicides is to silence the drums of American military adventurism.