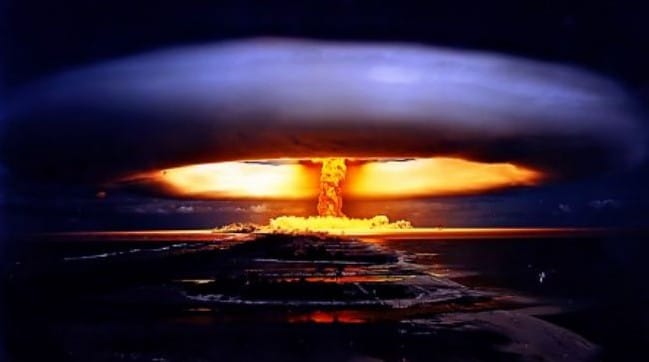 “The Army Corps of Engineers has a long history of unaccountable behavior bordering on “rogue.” They are, within all aspects of American military and government, long “above the law,” seizing land anywhere they choose.”

The project is one of several, moving Israel underground, safe from prying eyes of what is now clearly deep suspicion by “old friends” and genuine outrage by most of the world. We saw this clearly in the aftermath of the Gaza attacks and Israel and America’s staggering defeat at the UN.

Massive construction projects have been discovered that involve nuclear storage facilities, bioweapons labs and silos for nuclear missiles, some supplied by India, with range sufficient to reach key population centers in the United States.

The story was initially broken by Walter Pincus for the Washington Post. Pincus describes in detail the projects paid for by the American taxpayer and contracted out by the Army Corps of Engineers, the organization responsible for construction of the concentration camp known as “Gaza.”

The design is based on NORAD headquarters at Cheyenne Mountain, Colorado, built to withstand direct hits of up to 30-megaton thermonuclear warheads. The cost, listed as 100 million dollars for each of what is minimally three such “Fuhrer Bunkers,” will, in actuality, be closer to 20 billion dollars each.

“The U.S. Army Corps of Engineers plans to supervise construction of a five-story underground facility for an Israel Defense Forces complex, oddly named “Site 911,” at an Israeli Air Force base near Tel Aviv.

“…the facility is to have… a laboratory, shock-resistant doors, protection from nonionizing radiation and very tight security.

“The 1998 Wye River Memorandum between Israel and the Palestinian Authority has led to about $500 million in U.S. construction of military facilities for the Israelis, most of them initially in an undeveloped part of the Negev Desert.

“…three bases were built to support 20,000 troops, and eventually the Israeli air force moved into the same area, creating Nevatim air base. A new runway, 2.5 miles long, was built there by the Corps along with about 100 new buildings and 10 miles of roads.

“…the Corps has built underground hangers for Israeli fighter-bombers, facilities for handling nuclear weapons (though Israel does not admit having such weapons), command centers, training bases, intelligence facilities and simulators, according to Corps publications.

“…according to the Corps notice, “The employment of Palestinians is also forbidden.”

The Army Corps of Engineers has a long history of unaccountable behavior bordering on “rogue.” They are, within all aspects of American military and government, long “above the law,” seizing land anywhere they choose; unaccountable for expenditures and known to build massive projects that later prove not only useless, but also damaging and even ridiculous.

The massive projects in Israel, funded by “black budget billions,” money previously believed “missing” during Department of Defense Audits, a slush fund of nearly three trillion dollars, are in support of activities never approved and most probably violations of, not just international conventions, but make America complicit in war crimes as well.

We must remember it was the Corps of Engineers that built the wall around Gaza and the guard towers where Israeli snipers fire into what the world now officially recognizes as the free Palestinian State.

Legally, the law, based on the disputed Oslo Accords, which expired in 2000, would require the dismantling of the “Gaza Wall,” a project no different than the Warsaw Ghetto, the Berlin Wall or Buchenwald.

Not only is America restricting employment in what is really a multi-billion dollar project to “slave labor” workers brought in through illegal human trafficking, but the entire project, supervised by the Israeli architectural firm, Ada Karmi Melamende, is under Rabbinical supervision.

From the Army Corps of Engineers description of the mezuzah requirements, the Torahanical parchments that American taxpayers are paying for:

“for each door or opening exclusive of toilets or shower rooms… shall be written in inerasable ink, on… uncoated leather parchment” (done by scribes) “holding a written authorization according to Jewish law.” (written in) Ashkenazik or Sepharadik… not a mixture… (and) …must be uniform

…The Mezuzahs shall be proof-read by a computer at an authorized institution for Mezuzah inspection, as well as manually proof-read for the form of the letters by a proof-reader authorized by the Chief Rabbinate. All Mezuzahs for the facility shall be affixed by the Base’s Rabbi or his appointed representative and not by the contractor staff.”

Along with the multiple bunkers, reminiscent in some ways of those constructed under the Reich Chancellery in Berlin during World War II, believed by most to be the last refuge of Adolf Hitler, the Corps of Engineers, without approval, has built Israel’s missile silos.

However, now that the “sham” of America’s denial of Israel’s nuclear capability is “in the dust,” a question top American journalist Helen Thomas had queried of every American president, the US must not acknowledge full complicity in, not just Israel’s nuclear proliferation violations but advancement of their program from its infancy to a threat to, not just the Middle East but all of Europe and America as well.

Two years ago, it was revealed through multiple official intelligence sources that India’s AGNI 6 ballistic missile system had been pushed forward and had entered the production stage due to the illegal transfer of American technology through Israeli intelligence.

This missile, with a range of over 6,000 miles, carrying ten nuclear MIRV warheads, has been tested and deployed in India and, in accordance with a secret protocol between India and Israel; three units were delivered to Israel.

Along with this, a submarine launched version capable of carrying five nuclear warheads with a range of 4,000 miles has been deployed by both India and Israel and was adapted for the six German built Dolphin submarines Israel was essentially “given.”

The nuclear upgrades were done at the personal orders of German Chancellor Angela Merkel.

A statement made by Martin Van Cleveld, taken from Wikipedia and confirmed through the Guardian affirms his assessment on Israeli intentions:

“In a September 2003 interview in Elsevier, a Dutch weekly, on Israel and the dangers it faces from Iran, the Palestinians and world opinion van Cleveld stated:

‘We possess several hundred atomic warheads and rockets and can launch them at targets in all directions, perhaps even at Rome. Most European capitals are targets for our air force… We have the capability to take the world down with us. And I can assure you that that will happen before Israel goes under.’”

Cleveld, an internationally respected scholar and professor at the Hebrew University in Jerusalem is an expert on Middle Eastern affairs and issues of “nuclear blackmail.”

What is now clear is that Israel is preparing for a nuclear apocalypse, not just for survival, but one they are preparing to start.

What is also clear, more than clear, is that America’s role, building underground labs for biological and chemical warfare and also facilities for “handling nuclear weapons,” as stated by the Washington Post, is one of an active belligerent, a plotter, a full participant in preparations for wars of aggression, wars of Apocalypse.