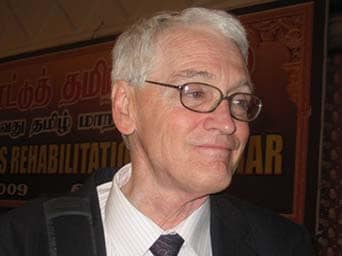 More than 30 top U.S. officials, including presidents G.W. Bush and Obama, are guilty of war crimes or crimes against peace and humanity “legally akin to those perpetrated by the former Nazi regime in Germany,” the distinguished American international law authority Francis Boyle charges.

U.S. officials involved in an “ongoing criminal conspiracy” in the Middle East and Africa who either participated in the commission of the crimes under their jurisdiction or failed to take action against them included both presidents since 2001 and their vice-presidents, the secretaries of State and Defense, the directors of the CIA and National Intelligence and the Pentagon’s Joint Chiefs of Staff and heads of the Central Command, among others, Boyle said.

In the Pentagon, war criminals include the members of the Joint Chiefs of Staff, and some Regional Commanders-in-Chiefs, especially for the U.S. Central Command (CENTCOM), and more recently, AFRICOM. Besides Chairman General Martin Dempsey, U.S. Army, JCS members include Admiral James Winnefeld Jr.; General Raymond Odierno, Chief of Staff of the Army; General James Amos, Commandant of the Marine Corps; Admiral Jonathan Greenert, Chief of Naval Operations; and General Mark Welsh, Chief of Staff of the Air Force.

Boyle told the Puerto Rican conference that President G.W. Bush had shamelessly exploited the 9/11 tragedy and “set forth to steal a hydrocarbon empire from the Muslim states and peoples living in Central Asia and the Middle East and Africa under “bogus pretexts.” These pretexts included fighting a war against “international terrorism” or “Islamic fundamentalism”, eliminating weapons of mass destruction, the promotion of democracy, and humanitarian intervention, Boyle said.

The serial aggressions of the U.S.violate such basic documents of international law as the Nuremberg Charter, the Nuremberg Judgment, and the Nuremberg Principles, Boyle said. As well, they violate the Pentagon’s own U.S. Army Field Manual 27-10 on The Law of Land Warfare, which applies to the President himself as Commander-in-Chief of U.S. Armed Forces under Article II, Section 2 of the U.S. Constitution.

U.S. administrations since 9/11 may be charged with “crimes against peace” for their attacks in Afghanistan, Iraq, Pakistan, Libya, Somalia,Yemen, and Syria, “and perhaps their longstanding threatened war of aggression against Iran,”

The eminent international authority went on to charge that the war crimes included “torture, enforced disappearances, assassinations, murders, kidnappings, extraordinary renditions, ‘shock and awe’ (bombings), and (the use of) depleted uranium, white phosphorus, cluster bombs, drone strikes,” and the like.

Boyle said Americans “must not permit any aspect of their foreign affairs and defense policies to be conducted by acknowledged ‘war criminals’” but must insist upon “the impeachment, dismissal, resignation, indictment, conviction, and long-term incarceration of all U.S. government officials guilty of such heinous international and domestic crimes.”

Boyle said the so-called “targeted killing” of human beings in a non-battlefield situation is “pure murder” under basic principles of Anglo-American common law and international criminal law. And in this case, where these murders are both widespread and systematic, these murders constitute a Crime against Humanity under Article 7(1)(a) of the Rome Statute for the International Criminal Court.

Although the United States is not a party to the Rome Statute, Boyle said, “nevertheless President Obama is subject to the jurisdiction of the ICC and its Prosecutor for murdering people in ICC member States.”

(Sherwood Ross is an American public relations consultant who works for good causes. He formerly worked for major dailies and wire services as a reporter and columnist. Reach him at [email protected])