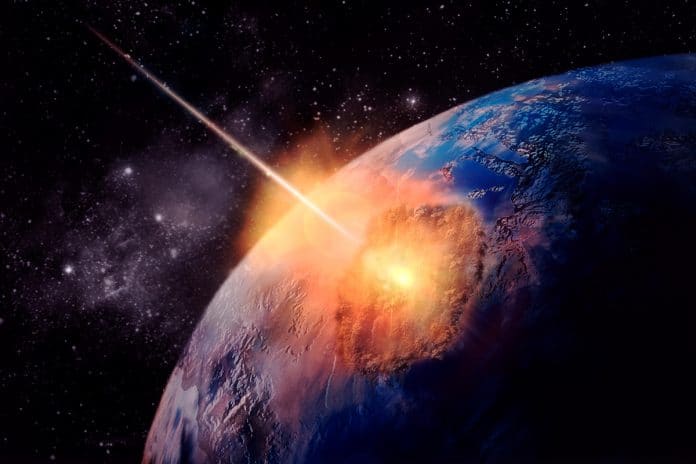 “The asteroid, known as DA14, will pass by our planet in February 2013 at a distance of under 27,000 km (16,700 miles). This is closer than the geosynchronous orbit of some satellites.  There is a possibility the asteroid will collide with Earth, but further calculation is required to estimate the potential threat and work out how to avert possible disaster”, NASA expert Dr. David Dunham told students at Moscow’s University of Electronics and Mathematics (MIEM) – (Source: CIA – EU).

Editor:  The story below is based on NASA data available to the public, news stories released early last year but later suppressed and private reports from sources within NASA and the intelligence community.  NASA indicated that the asteroid in question was “not on their radar” as it had been the result of an “unwanted visitor” in our solar system, the result of the collision of a rogue planet entering the asteroid belt OR a piece of said “rogue planet.”

Please note the totally lame responses to the video below. NASA has their own version and chose not only not to make it public but debunk what you see below.

The article below was submitted at my request by the European Counter Intelligence Agency in response to an interrogatory involving a “leak” received by Veterans Today.  Sources within NASA had informed us that two “vehicles” had been launched on a mission.  We were given no other information than this.  We have NO confirmation that this mission is, in any way, related to the video below or the CIA – EU report published below.

The clear implication, in informing Veterans Today, was that the information is highly classified and that the “vehicles” referred to are of a size and level of performance as “not to exist” or be within the realm of known technology.

One source of disclosure has been Richard Dolan.  We are including his presentation made in 2011 in Amsterdam.  It provides, I believe, key insights:

Private assurances I have received, if you will excuse the use of the term “assurance,” is that this asteroid, 60 meters in diameter, will, if Earth’s gravity impacts its trajectory as some believe, strike North Africa with the force of 2000 nuclear weapons, a collision not unlike that of the Tunguska “event” of 1908.  From Wikipedia:

At around 7:17 a.m. local time, Evenks natives and Russian settlers in the hills northwest of Lake Baikal observed a column of bluish light, nearly as bright as the Sun, moving across the sky. About 10 minutes later, there was a flash and a sound similar to artillery fire. Eyewitnesses closer to the explosion reported the sound source moving east to north. The sounds were accompanied by a shock wave that knocked people off their feet and broke windows hundreds of kilometres away. The majority of witnesses reported only the sounds and the tremors; not the sighting of the explosion. Eyewitness accounts differ as to the sequence of events and their overall duration.

The explosion registered on seismic stations across Eurasia. In some places the shock wave would have been equivalent to an earthquake of 5.0 on the Richter scale.[11] It also produced fluctuations in atmospheric pressure strong enough to be detected in Great Britain. Over the next few days, night skies in Asia and Europe were aglow;[12] it has been theorized that this was due to light passing through high-altitude ice particles formed at extremely low temperatures, a phenomenon that occurred again when the Space Shuttle re-entered the Earth’s atmosphere.[13][14] In the United States, the Smithsonian Astrophysical Observatory and the Mount Wilson Observatory observed a decrease in atmospheric transparency that lasted for several months, from suspended dust.

Sources indicate that IF the asteroid were to hit, even in the “middle of the Sahara,” it would cause a tsunami of unimaginable power.

Asteroid to threaten Earth in 2013 (attributed to Russia Today, March 2012)

To avert a possible catastrophe – this time set for February 2013 – scientists suggest confronting asteroid 2012 DA14 with either paint or big guns. The stickler is that time has long run out to build a spaceship to carry out the operation.

­NASA’s data shows the 60-meter asteroid, spotted by Spanish stargazers in February, will whistle by Earth in 11 months. Its trajectory will bring it within a hair’s breadth of our planet, raising fears of a possible collision.

There is a possibility the asteroid will collide with Earth, but further calculation is required to estimate the potential threat and work out how to avert possible disaster, NASA expert Dr. David Dunham told students at Moscow’s University of Electronics and Mathematics (MIEM).

“The Earth’s gravitational field will alter the asteroid’s path significantly. Further scrupulous calculation is required to estimate the threat of collision,” said Dr. Dunham, as transcribed by Russia’s Izvestia. “

The asteroid may break into dozens of small pieces, or several large lumps may split from it and burn up in the atmosphere. The type of the asteroid and its mineral structure can be determined by spectral analysis. This will help predict its behavior in the atmosphere and what should be done to prevent the potential threat,” said Dr. Dunham.

In the event of a collision, scientists have calculated that the energy released would equate to the destructive power of a thermo-nuclear bomb.

In response to the threat, scientists have come up with some ingenious methods to avert a potential disaster.

With the asteroid zooming that low, it will be too late to do anything with it besides trying to predict its final destination and the consequences of impact.

Whatever the mission, building a spaceship to deal with 2012 DA14 will take two years – at least.

The asteroid has proven a bitter discovery. It has been circling in orbit for three years already, crossing Earth’s path several times, says space analyst Sergey Naroenkov from the Russian Academy of Sciences. It seems that spotting danger from outer space is still the area where mere chance reigns, while asteroid defense systems exist only in drafts.

Still, prospects of meeting 2012 DA14 are not all doom and gloom.

“The asteroid may split into pieces entering the atmosphere. In this case, most part of it will never reach the planet’s surface,” remarks Dunham”.

But if the entire asteroid is to crash into the planet, the impact will be as hard as in the Tunguska blast, which in 1908 knocked down trees over a total area of 2,150 sq km (830 sq miles) in Siberia. This is almost the size of Luxembourg. In today’s case, the destination of the asteroid is yet to be determined.