Home History Jasenovac: The Cruelest Death Camp of All Times

By Vojislav Milosevic, Center for Counter-terrorism

At the Yalta Conference, February 1945, U.S. President F. D. Roosevelt stated: The crime of genocide committed against Serbs and Jews in the death camps of Croatia – the Croats should prohibit the possibility of establishing an independent state for the next 1000 years.

Jasenovac was Croatia’s largest death camp.  It was a network of several sub-camps, established in August 1941.  It certainly was a death camp, since the plan was to exterminate all its inmates.

While the killing in Sobibor, Treblinka, or Auschwitz was carried out on an industrial basis, in Jasenovac the Ustasha guards competed in killing contests, on an artisanal level.  The Croat Ustashas, the military wing of a clerical party whose symbol was the knife and crucifix, appeared to enjoy the burdensome labor of manual killing; they took pride in saving bullets, as they killed their enemies.  They used knives, hammers, axes.  Occasionally they used saws.

The number of people murdered in the Jasenovac death camp system is unknown.   Hundreds of thousands of Serbs perished there, together with Jews, Gypsies, Croat partisans, and other Croat opponents of the Ustasha regime.  Jews were brought to Jasenovac from all over the NDH (Independent State of Croatia).  Most were killed upon arrival, whilst a small number of skilled professionals were kept alive to work at the camp.  That gave rise to the absurd charge that the Jews were in charge at Jasenovac. 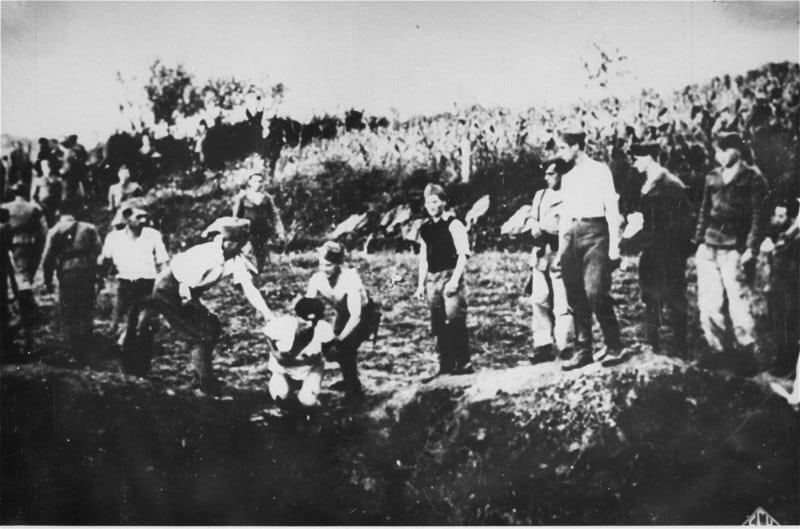 The Jasenovac concentration camp (Serbo-Croatian: Logor Jasenovac/Логор Јасеновац, pronounced [lôːgor jasěnoʋat͡s]; Yiddish: יאסענאוואץ‎) was an extermination camp established in Slavonia by the authorities of the Independent State of Croatia (NDH) during World War II. The camp was established and operated solely by the governing Ustaše regime rather than by Nazi Germany as in the rest of occupied Europe. It was one of the largest concentration camps in Europe and it has been referred to as “the Auschwitz of the Balkans” and “the Yugoslav Auschwitz”.

It was established in August 1941 in marshland at the confluence of the Sava and Una rivers near the village of Jasenovac, and was dismantled in April 1945. It was “notorious for its barbaric practices and the large number of victims”.

On April 22, 1945, 600 able-bodied inmates, armed with sticks and hammers, took the desperate decision to organize a mass escape, to face a very likely death today, as opposed to a certain death tomorrow.  Most died under machine gun fire, but 80 emerged from Jasenovac and survived.

“From above, a new European order is forced upon the masses, and masses open their hearts to the above. Underneath, it turns into devotion to symbols of death.

He is illuminated by Luciferian light, while he builds the inferno on Earth.

On June 6. 1941, at Berghoff residence,  Hitler meets Ante Pavelic, a leader of fascist Croatia. Pavelic will thank to him personally for the creation of the so-called “Independent State of Croatia” under German protection. Totally fascist “Independent Sate of Croatia”, was proclaimed on the April 10, 1941 at 4pm by Ante Kvaternik, one of the followers od Croatian Fuhrer Ante Pavelic. The very notion of crime, the notion of right and wrong, has been erased from existence, and the ruthless extermination of political enemies: Serbs, Jews and Gypsies, becomes the practice as well as ideology of the Ustashas, Croatian Nazis.

The prisons, known to the people from before, become a sort of nostalgic and sentimental memory of good times, compared to the monstrous concentration camps of today.

Dr Ante Pavelic, the Fuhrer, arrives to Zagreb on April 15 1941 at 4pm sharp, he is already at St. Marko Square in city center. From the main Ustasha HQ, he is sending messages to the nation underlining the fascist character of the Ustasha movement. Aiming to impersonate the great Fuhrer, and copy Nazi Germany in absolutely everything, including the public spectacles, Ustasha ideologists organize gatherings and rallies, instigating hatred among our peoples with the same flavor of Arian sarcasm.

The holy Catholic Church, headed by Archbishop Dr Alojzije Stepinac, congratulates to Pavelic the creation of “Independent State of Croatia”. Other  Catholic priests chose to follow the Archbishop’s steps. In Udbina, a local priest is saying to the flock of his parish: “Until now, we practiced our Catholic faith prayer books and a cross. Today, the time has come, to practice it with rifles and guns. We shall oust and exterminate all the Serbs from Croatia.”

Ustasha killers, the followers of the cult of knife and bloodshed, cross their killing daggers into a new emblem and swear to the cross and almighty God that they will take part in creating new history, contributing by sheer terror, and making preparations for the cult of blood to the sound of the organ. The tools are ready for lethal blow on the head.

The massacre of Serbs in Glina church expulsions and forced conversions to Catholicism become events performed on the horrifying scale.

Dr Mile Budak, deputy Fuhrer, launches a furious campaign against the Serbs and Jews. The anti-human spirit is the important element  of political character of fascism, even in its Croatian Ustasha version: honest Serbs, Jews, Croatians and Gypsies become the victims of the notorious Pavelic’ decree on sending “disobedient and perilous” persons to labor camps and concentration camps. The decree has legalized the existing state of affairs doors to mass terror are now wide open .

The most horrifying of all of the camps and the longest-lasting one was the inferno of Jasenovac death camp, with all nine circles of torture. In fact, it was a system of camps spreading over 223 acres of land. Such a large area equals to 175 ideally sized football pitches. The plans to construct this gigantic torture chamber have been devised by the deranged necrophilic mind of Vjekoslav Luburic, while he was still abroad along with the rest of Ustasha emigration. Gaining experience from German concentration camps, Luburic is perfecting his plan.

Vjekoslav Max Luburic, one of the cruelest Commanders of Jasenovac death camp…

Everything is twisted: a pigeon, symbol of peace in the hands of Max Luburic, a war criminal !!!

A central link of Jasenovac chain of camps made of barbed wire. This camp was founded in August 1941, and destroyed by those who created it, Ustahes – in May, 1945.

“The smell of Human Flesh”

“A Witness of the Holocaust Memories of Jasenovac”

by Cadik I. Danon “Braco

Mr. Danon’s main wish is for the entire world to learn about Jasenovac so that horrors and injustice of this sort are never, ever repeated- anywhere in the world. He is painfully aware that he is a rare survivor of the Jasenovac hell. He is also one of the few survivors who is still among us.

Today, September 26, 2007, Mr. Danon is still alive and well. As a retired architect he lives in Belgrade.