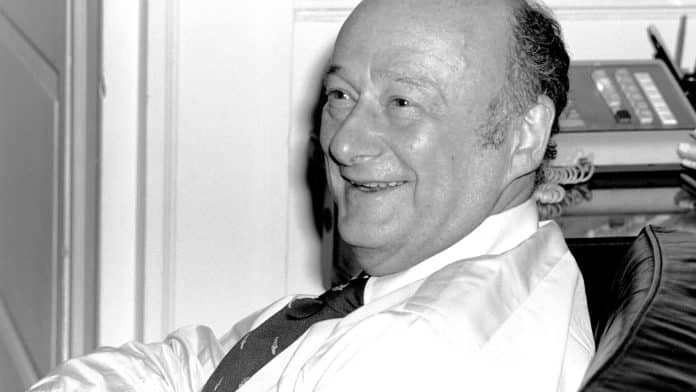 Main Stream U.S. Media Mourning the Loss of One of their Israel First Darlings

Former New York City Mayor Edward Irving Koch, a man as colorful as the city he allegedly helped save from financial ruin, died Friday of congestive heart failure. He was 88.

Koch often wrote in defense of Israel and, also, against the AIPAC definition of anti-Semitism.

He was a contributor to Newsmax, a conservative magazine.  He also appeared in the documentary FahrenHYPE 9/11 defending President Bush and the wars in Iraq and Afghanistan and blasting Michael Moore. Koch was quoted in the film saying of Moore’s film, Fahrenheit 9/11, “It’s not a documentary, it’s a lie.”

His brashness and thumbs-up confidence – and “How’m I doin?” greeting – became symbols of Gotham chutzpah over his three terms at the city’s helm. And while New Yorkers did not always answer Hizzoner’s trademark question in the affirmative, Koch couldn’t have cared less as he tried to govern a city that many thought was ungovernable. He finally left City Hall in 1989.

Reverend Al Sharpton, who locked horns with Koch through his time as mayor, praised the man he criticized as forthright in a statement on his passing.

“He would not patronize or deceive you,” said Sharpton, an MSNBC host, remembering that his first arrest for civil disobedience was at a 1978 sit-in protesting a Koch policy. “He said what he meant. He meant what he said. He fought for what he believed in.”

Born in the Bronx in 1924, Koch and his family soon decamped to Newark, New Jersey, where he spent his childhood. After graduating from high school at the age of 16, Koch returned to the city he loved and enrolled at the City College of New York, but his undergraduate studies were interrupted by World War II when he was drafted in 1943.

After serving as an infantryman in Europe, Koch enrolled at New York University Law School. He built up a law practice before he entered politics to support Adlai Stevenson’s presidential campaign in 1952.

Koch’s own political career began in earnest in the early 1960s, organizing for the Democratic party in Greenwich Village on Manhattan’s west side. In 1963, he ousted Tammany Hall chief Carmine DeSapio, winning a post as a district leader.

From 1969 to 1977, Koch served as a congressman representing New York’s 17th Congressional District. He mounted an unlikely run for mayor in 1977, ultimately defeating better-known candidates including incumbent Abraham Beame and congresswoman Bella Abzug.

And he brought his forceful personality and attention to detail to the job of mayor, said New York City historian Fred Siegel.

“His campaign slogan was ‘Why not try competence?’ and he demonstrates it. He really knows the budget, he’s on top of things,” Siegel said of Koch’s first years in office. Later, however, Koch “lost interest in the details of running the city,” Siegel said.

Koch’s aspirations went beyond the five boroughs, but more illustrious offices eluded him. A bid for governor in 1982 was felled by Mario M. Cuomo.

Yet the same personality that helped bring Koch national fame also divided some New Yorkers against him over time.

Koch was born in The Bronx, New York City, at New York–Presbyterian Hospital, the son of Yetta (née Silpe) and Louis Koch, immigrants from Poland. His family was Conservative Jews who resided in Newark, New Jersey, where his father worked at a theater. As a child, he worked as a hatcheck boy in a Newark dance hall. He graduated from South Side High School in Newark in 1941.

He was drafted into the United States Army in 1943 where he served as an infantryman with the 104th Infantry Division, landing in Cherbourg, France in September 1944. He earned two Battle Stars as a combat infantryman. He was honorably discharged with the rank of Sergeant in 1946.

Koch returned to New York City to attend City College of New York, graduating in 1945, and New York University School of Law, receiving his law degree in 1948. Koch was a sole practitioner from 1949 to 1964, and a partner with Koch, Lankenau, Schwartz & Kovner from 1965 to 1968.

A Democrat, he became active in New York City politics as a reformer and opponent of Carmine DeSapio and Tammany Hall.

In 1963, Koch defeated DeSapio for the position of Democratic Party leader for the district which included Greenwich Village, and Koch won again in a 1965 rematch. Koch served on the New York City Council from 1967 to 1969.

In 2012, Koch recalled walking to the Brooklyn Bridge during a 1980 transit strike to exhort commuters. “I began to yell, ‘Walk over the bridge!

Walk over the bridge! We’re not going to let these bastards bring us to our knees!’” Koch recalled.

“His mouth got in the way of his policies,” said investigative journalist Wayne Barrett, who chronicled the Koch years.

The mayor, however, remained forever close-lipped about the most private areas of his personal life, even as some speculated about his sexuality.
While opponents occasionally tried to make political hay of the whispers, Koch responded with silence: “Whether I am straight or gay or bisexual is nobody’s business but mine,” he wrote in his 1992 autobiography.

Koch’s final term was tarnished by corruption, as a scandal involving Queens Borough President Donald Manes threatened to ensnare the mayor, but never did. He lost a shot at a fourth term to the more reserved David Dinkins.

“The people have spoken,” Koch said on the occasion of his losing, “and they must be punished.”

But Koch, who became the first city mayor to host Saturday Night Live in 1983, did not allow his national profile to dim after losing the luster of the mayoralty. He also published a collection of newspaper columns critical of Rudy Giuliani in 1999 titled “Giuliani: Nasty Man.” And for two years in the late Nineties, he wore a black robe on the television show “People’s Court.”

On Friday, New York Governor Andrew Cuomo – the son of former governor Mario — paid tribute to the man who won’t be leaving New York, even in death. (Koch bought one of Manhattan’s last burial plots for $20,000 in 2008.)

“No New Yorker has – or likely ever will – voiced their love for New York City in such a passionate and outspoken manner than Ed Koch,” Cuomo said. “Mr. Mayor was never one to shy away from taking a stand that he believed was right, no matter what the polls said or what was politically correct.”

New York Mayor Michael Bloomberg said in a statement that the city had lost “an irrepressible icon, our most charismatic cheerleader and champion.”

Senator Charles Schumer lauded Koch as a man of whom New Yorkers could be proud: “Every atom in his body lived, breathed, spoke, and exuded the city. He helped save the city and, perhaps most important of all, gave it confidence when it was beginning to doubt itself, which helped pave the way for the growth and prosperity we’re still experiencing today.”

Koch died around 2 a.m. Friday after battling a variety of illnesses. He had been hospitalized in September with anemia and in December with a respiratory infection, before his final hospitalization this week.

A funeral service will be held on Monday.