President Bush and Vice President Cheney claimed they had repeatedly visited Dover AFB to honor American war dead.   Records at Dover AFB disagree, Bush and Cheney were never there, instead they chose to lie both personally and to send Lynn Cheney to lie for them.

Their claim that this was done quietly, with no cameras and no publicity is now proven to have been a total lie.

Neither Bush nor Cheney ever visited Dover. Neither came there, even once in 7 years of war, despite their stories told of tearful experiences that simply never happened.

This week, while attacking President Obama for a public visit to Dover to honor war dead, Vice President Cheney’s daughter Liz again repeated the stories President Bush and her father told, now known to be lies.

This couldn’t have happened at a worse time for Vice President Cheney. His story that he knew nothing of the exposure of top CIA nuclear weapons proliferation spy, Valerie Plame has lost any credibility, especially with federal prosecutors.

The importance of this case, in light of the spying arrest of top nuclear weapons designer, Stewart Nozette is closely tied to the Plame case. Nozette had been furnishing “Q” clearance (our highest) weapons information to foreign spies from Israel, not necessarily the Israeli government, who are suspected of selling this information to North Korea, Iran and Pakistan.

The exposure of Plame by the GOP allowed this spying to continue and may have led to the development of North Korea’s nuclear weapons. The technology trail, as described by FBI translator Sibel Edmonds, has put top American weapons technologies in the hands of nearly every American enemy. 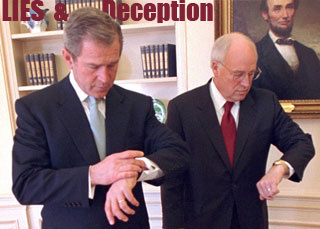 Nozette believed he was spying against the US for Israel and, when approached by FBI agents pretending to be Mossad agents, showed surprise. He said he had been working for the Mossad for years. However, this was not the case.

If, as prosecutors allege, former Vice President Cheney had been involved in derailing CIA efforts to break up spy rings active in nuclear proliferation, Cheney’s involvement, whether done because of a total mental breakdown or a real desire to harm the security of the United States, are going to take the full power of every criminal element high in our government to suppress.

Sources indicate that Vice President Cheney had become involved in an extremist Christian cult that openly advocated nuclear war, knowing it would destroy all life on Earth. Many top GOP leaders, Tom Delay, John Ashcroft, Trent Lott, Donald Rumsfeld, Alberto Gonzales, Paul Wolfowitz and others, some Christians, some Jews, are believed to have shared bizarre theories of Armageddon, apocalypse and rapture.

Cheney is thought to have believed he had been personally selected to sit at the hand of G-d and supervise the suffering of those “left behind” as described in series of books read and discussed at the highest levels of the Bush administration.

The destruction on 9/11 and the Iraq invasion closely parallel scenarios described in these books. The number of bizarre coincidences involving these and many other issues seem, to many, overwhelming, showing a human, if not diabolical hand.