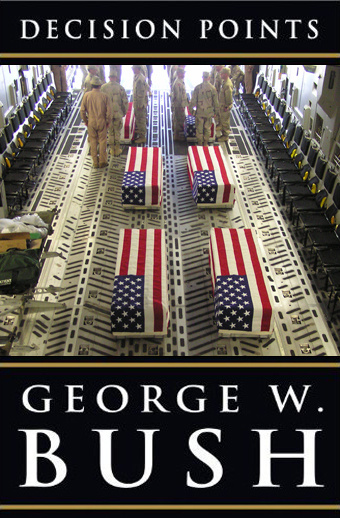 Let the opening of the George W Bush Library reflect that America’s worst decision point was the disputed election of our 43th President ~ George W Bush who in nine years was responsible for an illegal war and resultant death of approximately 300,000 Iraqi civilians and over 6600 American soldiers as well as being aware of and as such condoning the most treasonous act in America’s history, 9/11

George W Bush has a special space on America’s Wall of Shame which at least now exists in cyberspace ~ if not the Bush library on The Southern Methodist campus in Dallas, Texas.

Here is the link to several of the inept George W. Bush’s most embarrassing English language gaffes, starting out with his crude “One-Finger Victory Salute” with a post salute brief glimpse of the deeply insecure Bush and ending with a take-off on the fact that he had indeed been “wired” and prompted during the debates with John Kerry in 2004. 4 minute video

Bush had his wire and Obama his teleprompter but we all know who they answer to and after Citizen’s United ~ it’s obviously not the American people. But the main reason Bush has the number one position on America’s presidential Wall of Shame is his role in the greatest lie and most treasonous act in American history ~ the 9/11 false flag attack and Bush’s obvious prior knowledge of this Cheney coordinated mult-layered operation. This is the real reason Guantanamo still remains open as well as a moral disgrace ~ but that is now Obama’s shame.

“We are apt to shut our eyes against a painful truth… For my part, I am willing to know the whole truth; to know the worst; and to provide for it”: Patrick Henry