Home Life Palestine is not a Farm of the Saudi King 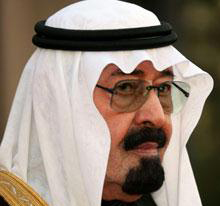 Palestine is not a private farm of King Abdullah of Saudi Arabia, of the Emir of Qatar, of the Arab League or the self-appointed Palestinian “president” Mahmoud Abbas, whose presidential term expired in 2009, since when nobody knows on basis of what laws he calls himself “president” and since when neither he nor his “Palestinian Authority” have any legitimacy in law, what makes all decisions and agreements in which they have a part null and void.

Arab League representatives recently said that they would accept the concept of land swaps in the context of an Israeli withdrawal to the pre-1967 lines. As much was said by the Qatari Prime Minister Hamad bin Jassim after his visit to the USA heading a delegation of Arab States , saying further that the Arab States agreed that any deal should be based on a two-state solution with the borders defined by the lines which existed before June 4, 1967.
We Palestinians strongly reject the amendments to the Arab peace initiative which was adopted by the Arab states and which offers Israel even more concessions by the Palestinian Authority and legitimize the settlement of American and European Jews in Palestine and opens the negotiation of the borders of 1967 which are suppose to be the borders of a Palestinian state.
We Palestinians strongly reject the land swaps proposed by the those Arab states, which legitimize the continuity of the Israeli occupation on Palestinian land in return for Israel renouncing some Arab blocks of land inside occupied Palestine of 1948, what they now called Israel, and some Arab blocks populated with people destroyed by the Israeli occupation by use of drugs and organized Israeli. These land blocks have not been developed in any way since 1948 and are now a burden on the Zionist state because of the destruction which they have caused there, and they want to give it back to the Palestinian Authority.

The Palestinian rights are inalienable, they are based on international law, they are not negotiable. Period. Our rights need not be asked or begged for, they do not depend on the affected benevolence of our Arab and other false “friends”. The promise of the Arab League delegation to Washington looks to us Palestinians as illegal as the Balfour promises to Jews in Palestine. We Palestinians sharply warn the PA from accepting the concept of land swaps in the context of an Israeli withdrawal to the pre-1967 lines.

The Arab states’ offer to the US and the Zionists does not represent us the Palestinian people. Palestine is not an egg in the basket of the Arab States to be used in their fraudulent transactions and suspicious relations with the Zionists of USA and Israel. If the Arab States want to build full relation with Israel and to be the dogs to the Americans more they now, then they should go ahead, they can do whatever they want, but do it far away of Palestine and Palestinians: renouncing the Palestinian rights will never make lions out of big rats.
To us Palestinians, any settlement blocs remain within the limits of the 67 will only serve as an excuse for renewed “legitimization” of the Zionist occupation and the imposition of the so-called “security measures” which impede the lives of the Palestinian people and are threatening like a bomb, which can blow up at any moment and totally destroy the so-called peace agreements. To us Palestinians it is more than clear that, in any legitimate peace agreement, the swift, unconditional and complete withdrawal of all jewish colonists and all foreign soldiers from our territory is not negotiable.
It is astonishing that, while Israel’s prime minister declares that he will submit any agreements that may be reached with the PA to a referendum in Israel before its approval or rejection, President Abbas and the so-called Arab states deal with us Palestinians like a nation of slaves working their farms and Palestine like their own property.
It should be noted that the Saudi King Abdullah bin Abdul Aziz launched the Arab peace initiative between Israel and the Palestinians in 2002. His initiate was adopted by the Arab states. The Arab peace initiative is based on the full withdrawal of Israel from the Palestinian territories which were occupied in 1967, and the establishment of an independent Palestinian state with East Jerusalem as its capital, offering in exchange entering into a peace agreement between Israel and Arab states.
We Palestinians say today to the Saudi King Abdullah bin Abdul Aziz, to the Prince of Qatar and to the Arab League and to Mamoud Abbas: shove your initiative into where the sun does not shine and go to hell. Your offers do not concern us Palestinians and you have no say whatsoever in our national matters.