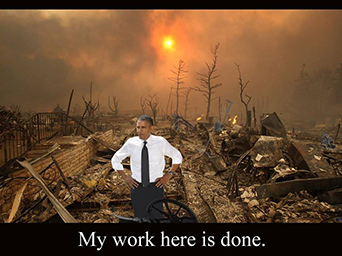 CHARLOTTESVILLE, VA. — Overall, President Obama has been “a force for destruction” who has “advanced inequality, wealth concentration, deportations, imprisonments, and the de-funding of basic services in order to fund banks, billionaires, and bombers,” distinguished peace activist David Swanson says.

In an exclusive interview with this reporter, Swanson, a former staff aide to Rep. Dennis Kucinich’s presidential campaigns, said Obama has done nothing to better the lot of the nation’s poor, including Americans in the ghettos, apart from reducing “the disparity in crack-powder cocaine sentencing.”

Noting that Obama has attempted to identify himself with the late civil rights leader Martin Luther King, Swanson was asked if he saw any resemblance. His reply was “Two eyes and two ears and two feet and in Obama’s case two mouths. He got a Nobel Peace Prize before he did anything for peace,” Swanson said. “So did King, and King followed through and retroactively earned it. Perhaps that led to the ludicrous bestowing of the prize on Obama, who proceeded to give a pro-war acceptance speech in which he insultingly and arrogantly denounced King’s approach to world change.”

Asked if either Obama or his former Secretary of State Hillary Clinton might carry out their threat to make a nuclear attack on Iran, Swanson said, “I think they are willing to and would find joy in it. Watch the video of Clinton laughing over the killing of (Libya’s ruler Muammar} Gaddafi. Watch the video of her talking about ‘obliterating’ Iran. She takes obvious pleasure in such talk, as does Obama. I don’t think it’s at the top of their to-do list, but as long as they allow Israel and Congress to roll ahead, as long as they support the propaganda against Iran, as long as they pursue sanctions as an ‘alternative’ to war that usually brings war closer, the danger will grow.”

Swanson was asked if the U.S. could defeat powerful enemies Germany and Japan in three and one half year in World War II how it has been in Afghanistan for well over a decade with no victory in sight, and whether this was not a deliberate plan to continue a high level of military funding.

“Motivations clearly include irrational masochistic power, financial profit, election campaigning, domination of territories and resources, and the inertia of the war machine,” Swanson said. “I don’t think there’s just one reason, but I think all the reasons are bad ones.”

He went on to say, “I agree that many want to keep the wars going, including those so deluded as to imagine that wars produce jobs. Connecticut’s new commission to plan economic conversion is the most encouraging step I’ve seen in a long time. Forty-nine states need to sit up and take notice.”

Asked why there is so little popular opposition to President Obama’s warlike policies compared to the public outcry during the Viet Nam war, Swanson replied: “Less of it (the war) is shown in corporate media, resulting in its actual diminishment. The propaganda—including the lie that people are impotent to effect change—has become much slicker. People are directed into entertainment, ignorance, and ineffective types of activism, above all electoral campaigning.”

“Our schools are worse, our news media is worse, our political system is more corrupted. Propagandists and recruiters are more skilled. The draft is a poverty draft, presented as a favor to its direct victims rather than an assault on them. And knowledge of the crimes to be protested barely exists. A majority of Americans believes Iraq benefitted from a war that destroyed Iraq. People won’t protest that which they don’t know about.”

Asked how deeply totalitarianism is ingrained in American life, Swanson said that “Americans are among the most obedient and subservient people around. We imagine just the reverse and certainly our tendency toward obedience competes with out tendency toward independence and rebellion. But the majority of politically engaged Americans radically alter their demands depending on which of two very similar political parties is in the White House, accept imperial powers for presidents without thought, ingest corporate propaganda without resistance, and believe that even popular activism is dependent on the divine appearance of an all-powerful leader.”

Asked what it will take to get the pacifist message through to the multitudes, Swanson replied, “It may take some combination of independent media and infiltration of corporate media. The latter will only effectively follow the former. So our priorities are backwards right now. We need a much greater emphasis on building independent journalism. And we need a movement to educate people to rely on it. If potential activists won’t take anything seriously that they don’t see on corporate media, it does us little good to get it to them by other means.”

Swanson hosts “Talk Nation Radio” and is the author of numerous anti-war books that have drawn wide attention and praise. These include “The Military Industrial Complex at 50” and “War Is A lie.”

Sherwood Ross formerly contributed weekly columns to United Press International(Magazines in Review) and Reuters(Workplace.) He now lives in, and writes from, Miami, Florida. Reach him at [email protected]