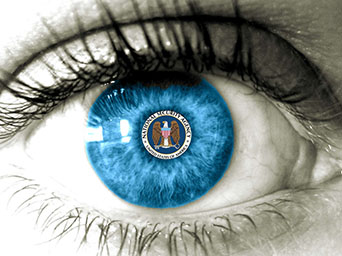 So now it’s common knowledge that America has built a massive full spectrum privatized information retrieval apparatus (PRISM) which becomes fully operational this fall and confirms that we are now living in Orwell’s invasive Oceania ~ where technology is being consciously used to manipulate the public as well as crush human liberty and deny our privacy.All of this is preparation for the fast approaching New World Order:

Coming face to face with PRISM is like the cave men in Kubrick’s 2001 Space Odyssey experiencing the dark monolith ~ which in this video adaptation  lookspurposely similar to an Apple Iphone 5 ~ and the first realization that they are being monitored by a technology far more powerful than themselves ~ which, like the party members in Orwell’s Oceania, they will eventually learn to love in their servitude.

In the June 16, 2013 issue of Information Clearing House –  J.P. Higgs shares that the Associated Press dropped a bombshell report that claims the NSA’s secret Internet spy program Prism is just a small part of a much more “expansive and intrusive” digital spying effort. According to the AP, the NSA copies ALL INTERNET traffic in and out of the United States for analysis by hoovering all data that passes through fiber lines.

“Tapping into those cables allows the NSA access to monitor emails, telephone calls, video chats, websites, bank transactions and more. It takes powerful computers to decrypt, store and analyze all this information, but the information is all there, zipping by at the speed of light,” AP reports.

Prism was originally thought to be a program to force Internet companies to hand over private user data to the government. But it turns out that Prism is actually a filtering tool to “make sense of the cacophony of the Internet’s raw feed…Prism takes large beams of data and helps the government find discrete, manageable strands of information.”

It then manages those strands of data by creating dossiers on every Internet user, providing the government with “names, addresses, conversation histories and entire archives of email inboxes.”

And, of course, all of this data is collected and kept on innocent people without a warrant or any probable cause.

” This explosive report comes the same day that the NSA held a classified briefing for members of Congress where they admit to listening to phone calls within the United States without a warrant.”

So what was disclosed in that NSA classified briefing for members of Congress last Wednesday ?

Glenn Greenwald, who broke the Spying scandal in the Guardian, reveals that we have just touched “the tip of the iceberg” ~ ” I did, though, want to note a few points, and particularly highlight what Democratic Rep. Loretta Sanchez said after Congress on Wednesday was given a classified briefing by NSA officials on the agency’s previously secret surveillance activities:

“What we learned in there is significantly more than what is out in the media today. . . . I can’t speak to what we learned in there, and I don’t know if there are other leaks, if there’s more information somewhere, if somebody else is going to step up, but I will tell you that I believe it’s the tip of the iceberg . . . . I think it’s just broader than most people even realize, and I think that’s, in one way, what astounded most of us, too.”

The Congresswoman is absolutely right: what we have reported thus far is merely “the tip of the iceberg” of what the NSA is doing in spying on Americans and the world. She’s also right that when it comes to NSA spying, “there is significantly more than what is out in the media today”, and that’s exactly what we’re working to rectify”   See Greenwald article:

As Pepe Escobar writes in AlterNet ~ ” PRISM, as expressed in its Dark Side of the Moon-ish logo, is no less than a graphic expression of the ultimate Pentagon/neo-con wet dream; the Full Spectrum Dominance doctrine.  The NSA ~ also known as No Such Agency ~ is part of the Pentagon.  Full Spectrum Dominance was conceptualized in the Pentagon’s 2002 Joint Vision 2020. It’s the Pentagon/NSA blueprint for the foreseeable future; in trademark Pentagonese, it identifies “four capabilities” ~ dominant maneuver, precision engagement, focused logistics and full-dimensional protection”. In sum: Total Information Awareness (TIA).”    See article ~

Here’s a must see 13 minute video of Democracy Now’s Amy Goodman interviewing whistleblower Glenn Greenwald on the latest developments in this growing scandal which adds further proof that the worldwide Internet has been effectively mined and exploited by the NSA. Greenwald identifies Senator Diane Feinstein as a key player in instituting this climate of fear and calls her “the most Orwellian political figure in Washington, DC.”

To fully understand PRISM, you must first think global for we are talking here about a growing global security state which will be an integral part of the fast approaching New World Order.

Tom Englehardt identifies the five urges essential to understanding the secret world of PRISM ~ that Edward Snowden and Glenn Greenwald has most certainly helped us glimpse.

Don’t underestimate Glenn Greenwald, he’s loaded for bear and on a truth telling roll ~  as witness him taking apart Bill Mayer for trying to absolve the U.S. from any responsibility for the mass slaughter and destruction in Muslim countries, blaming it on Islamic fundamentalism, as if the Afghanistan and Iraq wars never happened, as if the US wasn’t pushing for more war in Iran, as if it isn’t intervening in Somalia and Yemen. Two minute video ~

So there you have it or as Tom Englehardt summarized; “ President Obama came into office promising a “sunshine” administration that would open the workings of the government to the American people.  He didn’t deliver, but Bradley Manning, Edward Snowden, and other leakers have, and no matter how difficult the government makes it to leak or how hard it cracks down on leakers, the urge is almost as unstoppable as the urge not to be your government’s property.”

“In Oceania at the present day, Science, in the old sense, has almost ceased to exist. In Newspeak there is no word for ‘Science’. The empirical method of thought, on which all the scientific achievements of the past were founded, is opposed to the most fundamental principles of Ingsoc. And even technological progress only happens when its products can in some way be used for the diminution of human liberty”  George Orwell, I984

“Truth is coming, and it cannot be stopped” – Edward Snowden – NSA whistleblower