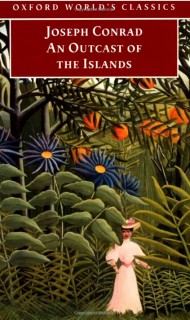 Chinua Achebe famously argued that Joseph Conrad’s Heart of Darkness is a racist book. But Conrad was obviously no garden-variety racist. As Masood Ashraf Raja explains, Conrad’s portrait of Malaysian Muslims in several early works was rich, nuanced, and sympathetic.

Conrad’s first two novels, Almayer’s Folly and An Outcast of the Islands, chronicle the triumph of an Arab-Malay Muslim alliance in its trade war with European colonialists. Raja points out that Almayer’s Folly ends with a bismillah blessing the Muslim victory over the colonialists and inaugurating a new era of freedom and independence under Islamic rule. Though this outcome may have been unhappy for some of Conrad’s European characters, there is no evidence that Conrad viewed it as tragic in the larger scheme of things.

On the contrary, it is possible to read these books, especially Outcast, as highly favorable to Islam. Specifically, Conrad suggests that the hidden source of the tragedy, suffering, and despair afflicting Outcast’s main European character, Willems, is his refusal to convert to Islam – and at a deeper level, his inability to make complete, existential submission to God (islam with a lower-case i).

Willems, like other Westerners only more so, is driven by a sort of vainglorious, insatiable egotism. He cannot submit to reality (or Reality) and be content with his lot. So he tyrannizes his scolding “half-caste” wife and creates for himself a miserable marriage; embezzles (or “just borrows”) money from his employer; and finds himself exiled to a remote trading settlement up the river. There, Willems falls in fully requited love with Aissa, the daughter of a Muslim holy man.

At this point, all Willems has to do to live happily ever after is: CONVERT TO ISLAM AND MARRY THE GIRL! But due to his typically Western egotistical blindness, the thought doesn’t even cross his mind. Nor does Conrad explicitly raise the possibility.

Had Willems accepted Islam and married his beloved Aissa, he would have joined the “winning team” – the soon-to-be-victorious Muslim trading alliance – and achieved a position of wealth, power, social respect, and spiritual satisfaction, as well as a loving marriage. But a European racist Islamophobe through-and-through, he cannot help despising his “savage, heathen” lover, her culture, and her religion. Worse, he cannot help despising himself for loving her.

Interestingly, it isn’t just Willems who doesn’t get it. Conrad scholar John Lester is probably not the only Western reader who has completely missed the point that Willems’ whole problem with the Muslims he’s living with – the problem that seals his doom – stems from refusal to convert and marry his sweetheart.

“Marriage with Christians is actually permitted by the Qur’an but since Willems is already married, Abdulla (who wants to work with Willems in the trade war -KB) is condoning adultery, which is proscribed by both Islam and Christianity. But it is the fact that Willems is an outsider that troubles Abdulla most.” (Conrad and Religion, p. 55, cited in Raja).

Wrong. As Raja points out, the problem with the Willems-Aissa relationship, from the perspective of their Muslim community, is that Willems is a non-Muslim. According to Islamic law, Muslim women are not allowed to marry non-Muslim men. That is what condemns Willems and Aissa to adultery.

If Willems converted to Islam, the problem would disappear. His earlier marriage would not be a problem, since under traditional Islamic law men are allowed up to four wives. And he would no longer be an “outsider.” That unstated possibility of conversion, and the felicity it would bring, is the Islamic shadow that hangs over the entire text of Outcast.

Islam is also the contrapuntal shadow for the text’s depictions of the suffering of various “outcasts” from creation itself – the Europeans who no longer believe in and practice their religion. Willems is just the extreme example. All of the novel’s European characters are outcasts in this larger, cosmic sense; Willems is simply more aware of it, tormented by it, and doomed to carry it to its foreordained conclusion.

Conrad’s beautifully conflicted descriptions of the glories and sublime horrors of nature illustrate this theme. To Aissa, Willems’ Muslim lover, the upriver Mayasian-archipelago jungle is the “grassy glade on the banks of a small brook” where she and Willems met and fell in love – a lovely pastoral romance, as is all of nature to those who are in love – and in love with God.

To the whites, who have lost both God and love, the sublime glories of the tropical jungle are tedious, nauseating, and ultimately meaningless:

“Almayer stood by the balustrade looking out at the bluish sheen of the moonlit night. The forests, unchanged and sombre, seemed to hang out over the water, listening to the unceasing whisper of the great river; and above their dark wall the hill on which Lingard had buried the body of his late prisoner rose in a black, rounded mass, upon the silver paleness of the sky…’Here!’ went on Almayer, speaking very loud and thumping the table. ‘I want to know. You, who say you have read all the books, just tell me…why such infernal things are ever allowed.’”

Here we are in Heart of Darkness territory. At least in Outcast, and arguably in his other work, Conrad is informing us that the real darkness is in the heart of the white man who has lost his religion – and with it his ability to love and be at home in the world.