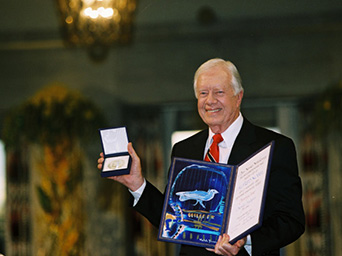 2002 Nobel Peace Prize winner and Former President Jimmy Carter is America’s most famous truth teller and moral revolutionist. Carter recently declared that “The U.S has no functioning Democracy” which did not appear in American mainstream press; Carter rightfully defends NSA whistleblower Edward Snowden actions declaring that “the invasion of human rights and American privacy has gone too far” and finally Carter still correctly argues argues that “Israel’s continued control and colonization of Palestrina land have been the primary obstacles to a comprehensive peace agreement in the Middle East.”~and yet Jimmy Carter continues to be ostracized by the global elite and main stream press who obviously deeply fear his revolutionary moral truths:

Only the truth is revolutionary and with that in mind, former president and Nobel Peace Prize winner Jimmy Carter is our most famous living truth teller and moral revolutionist ~ who continues to gnaw at the collective conscience of a spiritually faltering America with his penetrating truths, which are based on universal moral principles of equality, fairness and justice.

Carter’s most famous speech is his Crisis of Confidence or Spiritual Malaise speech on July 15. 1979 which was deeply prophetic of future unfolding events which have led us to our present morally deteriorated state ~ see 2 minute video of excerpts

Here’s excerpts of Carter’s exact works on the moral apathy which was already beginning to grip our nation ~ “Our people are losing that faith, not only in government itself but in the ability as citizens to serve as the ultimate rulers and shapers of our democracy. As a people we know our past and we are proud of it. Our progress has been part of the living history of America, even the world. We always believed that we were part of a great movement of humanity itself called democracy, involved in the search for freedom, and that belief has always strengthened us in our purpose. But just as we are losing our confidence in the future, we are also beginning to close the door on our past….But we’ve discovered that owning things and consuming things does not satisfy our longing for meaning. We’ve learned that piling up material goods cannot fill the emptiness of lives which have no confidence or purpose…. The symptoms of this crisis of the American spirit are all around us. For the first time in the history of our country a majority of our people believe that the next 5 years will be worse than the past 5 years. Two-thirds of our people do not even vote. The productivity of American workers is actually dropping, and the willingness of Americans to save for the future has fallen below that of all other people in the Western world.”

Jimmy Carter is a global moral force and trouble shooter for fairness and justice who gives living truth to these words by William James ~ words which also happen to be an inspiration for myself ~ “I am done with great things and big things and great institutions and big successes, and I am for those tiny invisible molecular forces that work from individual to individual, creeping through the crannies of the world like so many rootlets or like the capillary oozing water, yet which, if you give them time, will bend the hardest monuments of human pride”

Here are some famous Jimmy Carter quotes which give ample evidence of his moral courage;

” War may sometimes be a necessary evil. But no matter how necessary, it is always an evil, never a good. We will not learn how to live together in peace by killing each other’s children.“   Jimmy Carter

“I think what’s going on in Guantanamo Bay and other places is a disgrace to the U.S.A. I wouldn’t say it’s the cause of terrorism, but it has given impetus and excuses to potential terrorists to lash out at our country and justify their despicable acts.“  Jimmy Carter

So it gives me great comfort to watch Jimmy Carter continue to weave his moral magic throughout the world oblivious to the snickers and silence from the main stream media and global elite ~ but true to his deep sense of moral truth and justice as well as his willingness to deal with controversial issues. A great example is his book Palestine: Peace Not Apartheid, as well as his current defense of NSA whistleblower Edward Snowden, shared at a closed door meeting of Atlantic Bridge, and reported by the German newspaper Der Spiegel but ignored by America media outlets ~ and only accessed through the alternative press:

“The English translation of Carter’s remarks was published in the online news source Inquisitr.com. No American media outlets reported on the closed meeting and it was not clear where Der Spiegel got its information, Inquisitr noted. But both Inquisitr and Huffington Post, which also carried the story, noted that the quotes were consistent with previous published remarks by the former president.

In June, Huffington Post noted, Carter addressed the Snowden controversy in an interview with CNN after the 29-year-old intelligence analyst had flown from Hong Kong to Moscow in his quest for asylum from the U.S. government that is seeking to prosecute him for espionage and theft of government property. “He’s obviously violated the laws of America, for which he’s responsible,” Carter said at that time, “but I think the invasion of human rights and American privacy has gone too far.” The Georgia Democrat also said nations that were offering asylum to Snowden were acting within their rights. “I think that the secrecy that has been surrounding this invasion of privacy has been excessive, so I think that the bringing of it to the public notice has probably been, in the long term, beneficial,” Carter said. See Article ~

How refreshing it is to experience a modern day American president, or in this case former president, who is actually walking his talk.

“I’ll never tell a lie. I’ll never make a misleading statement. I’ll never betray the confidence that any of you had in me. And I’ll never avoid a controversial issue.“
Jimmy Carter