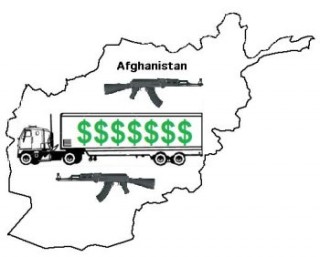 It’s extremely ironic for the US State Department to be issuing travel alerts for US citizens in the Middle East and North Africa the same week we learn that the Pentagon is contracting with Al Qaeda and Taliban supporters to carry out Afghan reconstruction projects.

Tony Capaccio of Bloomberg News cites a quarterly report to Congress by Special Inspector for Afghan Reconstruction John Sopko.The report reveals Sopko asked the US Army Suspension and Disbarment office to cancel 43 contracts to known Al Qaeda and Taliban supporters. They refused. The reason? The Suspension and Disbarment Office claims it would violate Al Qaeda and Taliban “due process rights.”

Curious, isn’t it? Official terrorist groups have due process rights, but not whistleblowers, Guantanamo detainees, or ordinary Americans subject to continual surveillance by NSA.

The intelligence community has been quietly leaking evidence for more than a decade that the US is secretly funding Al Qaeda to promote political instability (and justify continued military intervention) in the Middle East. In the last two years the CIA has been caught red-handed funding and training Al Qaeda militants in Libya and Syria.

Based on Sopko’s report, Pentagon support for Al Qaeda and the Taliban is official as of August 1.

The 236 page quarterly report Sopko submitted to Congress also raises grave concerns about Obama’s request for $10.7 billion in 2014 for Afghan reconstruction projects. All would be carrying out by civilian contractors, of which 30-40% would be local Afghan businesses.

Sopko argues the Pentagon already fails abysmally in monitoring an existing $32 million program to install bars or gratings in culverts to prevent insurgents from planting roadside bombs in them. He thinks at bare minimum the Department of Defense should now how many contracts they have issued under this program. They don’t. Thus it seems pretty obvious they aren’t vetting the contractors, much less monitoring where the money is going.