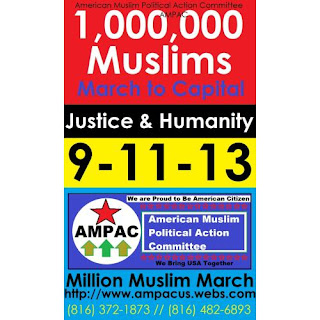 The Million American March Against Fear – originally the Million Muslim March, until non-Muslims started asking to join – is reaping a bonanza of publicity.

Thanks to idiots like Sean Hannity, the Million American March appears likely to succeed in drawing a crowd to the National Mall in Washington DC on September 11th, 2001.

https://www.youtube.com/watch?v=eoM6-kR0TzQ
The main sponsor of the March is the American Muslim Political Action Committee (AMPAC), founded by MD Alam and Isa Hodge. AMPAC currently enjoys a limited promotional budget, so any free publicity is useful. And Sean Hannity just handed AMPAC millions of dollars worth of publicity by inviting MD Alam to appear on Fox News, and opening the door to wider mainstream coverage.
Hannity – and a virulent Zionist-paid professional Islamophobe named Brigitte Gabriel- went so far overboard attacking Alam that they wound up making him look good. By coming across as fanatical, hate-mongering bullies, they inadvertently made Alam’s point that Muslims have been the biggest victims of 9/11.
Russia Today, unlike Fox, is covering the Million American March fairly:
Million-Muslim March on 9/11 anniversary planned in DC
The liberal-Zionist Huffington Post at least appreciates the dark comedy of folks like Hannity and Gabriel making idiots of themselves:
‘Million Muslim March’ Planned On 9/11 Anniversary Prompts Conservative Freakout
US News corrected some of the factual errors in the Huffington Post piece, but under a misleading headline designed to discourage participation in the March – which is still scheduled and likely to be much bigger than previously expected:
Washington Whispers There Is No More ‘Million Muslim March’ on 9/11
The Washington Times weighed in:
AMPAC plans ‘Million Muslim March’ for D.C. on 9/11
So what is the real story of the Million American March Against Fear?
Press TV first broke the story last January, showing how far it always is ahead of the Zionist-owned lamestream media:
Muslims to march on White House next September 11th
An outpouring of support from non-Muslims led AMPAC to change the “Million Muslim March” to the “Million American March Against Fear.”
Why bring Muslims and non-Muslims together to march against fear?
The march is a bold statement against the politics of fear, which has dominated the West, especially the US, since 9/11. (A good primer on the post-9/11 politics of fear is the BBC documentary “The Power of Nightmares.”)
Non-Muslims have been brainwashed to fear Muslims, and Muslims have been brainwashed to fear Guantanamo and worry about what non-Muslims think of them. The Million American March Against Fear rejects this brainwashing. Those who march are making a clear statement: “We are fearless! We are no longer ruled by the politics of fear.” (Anyone willing to join Muslims marching on 9/11 in DC is obviously fearless!)
The marchers will demand the restoration of the Constitution for all Americans, an end to post-9/11 police state measures, and a real investigation of 9/11.
All Americans who have gotten tired of the politics of fear should plan to be on the National Mall in Washington, DC on September 11th, 2013.