Home Life The Wisdom of Donald Rumsfeld: Determining Whether to Wage War in Syria

So much has been written about whether to go to war with Syria, I confess I have little of substance to add to the debate. Instead I will share the process through which I made my decision utilizing the following epistemological insights coming from the most unlikely of sources (at least for me), former Secretary of Defense, Donald Rumsfeld as expressed during a news conference discussion of the Iraq war .

“There are known knowns; there are things we know that we know. 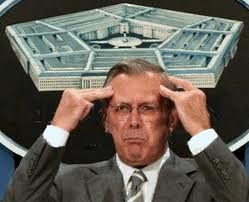 Clearly, I am not alone in my confidence in Rumsfeld’s “wisdom” as he is still a favorite and respected “expert” often called upon by a myriad of Main Stream Media outlets for his perspective on foreign policy, war, and the resolution of conflict.

The purpose of this epistemological exercise is to determine, whether I would support or oppose another war in the Middle East. The process is intended to distinguish what I know and don’t know about the Syrian civil war from what others would have me believe. I would, as well, recommend this method of reasoning to others so as to ensure that we make the best possible decision and avoid another fiasco like Vietnam, Iraq, and Afghanistan.

“There are known knowns; there are things we know that we know.”

Here are some of the things I profess to know made clear by International law as well as recent history, both of which are apparent, I think, to anyone who does a minimum of research and/or pays attention.

(A) However our political leaders would like to characterize it, I know that raining bombs and missiles down on another nation constitutes a war regardless of whether it lasts weeks or years, places boots on the ground, or Americans in harm’s way.

(B)  Unless under attack or facing a threat that is REAL and IMMANENT, I know that no nation is empowered to wage war without the approval of the United Nations Security Council.

(C)  I know that the United States, specifically the President, is not empowered to make determinations of criminal behavior and unilaterally “punish” other nations it deems liable, again without authorization from the United Nations Security Council.

(D) I know that technologically sophisticated weaponry is no guarantee of success (of victory). Despite being bombed (“missiled”) “back into the stone age,” aggressed people, though armed with comparatively “primitive” weaponry, will struggle heroically and with great determination and perseverance, until the aggressor is defeated or its people decide that the campaign is futile and the quagmire not worth further sacrifice of lives and treasure.

(E)  I know that war, bombing, invasion, and occupation do not replace diplomacy, nor does violence resolve conflicts and disagreements. For the most part it only complicates things further making them worse. Violence does in fact beget violence.

(F)   Given its behavior during the Vietnam, Iraq, and Afghanistan War, its program of targeted assassination (extra judicial killings), its violation of International law (the sovereignty of other nations), torture, Guantanamo Bay, etc., I know that the United States, specifically the President, lacks the moral and legal credibility to make moral and legal judgments regarding the behavior of other nations and leaders. 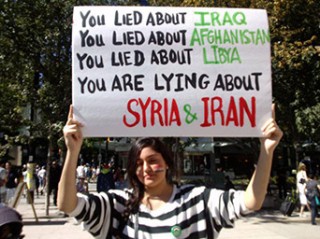 (G) Given the legacy of lies and untruths regarding issues of national defense, weapons of mass destruction, terrorist threats, etc., that have been exposed by truth tellers like Chelsea Manning and Edward Snowden, I know I cannot accept blindly and trustingly and without critical analysis, the arguments for war presented by this and any other Administration.

(H) I know that the United States is profoundly ineffective at nation building. If there is to be regime change, it should begin at home.

(I)    I know that the use chemical weapons, whether it be sarin gas, white phosphorous, napalm, depleted uranium, agent orange, etc., whether it used by the Syrians, Americans, Israelis, etc., is repugnant and a violation of international and moral law.

There are known unknowns; that is to say, there are things that we now know we don’t know.”

Here are some of the things that I, and from what I can ascertain, most others including our political leaders who will soon be deciding whether to go to war with Syria do not know.

(A) I do not know how Secretary of State Kerry, et al, can be certain that sarin gas was used in Syria when the UN inspectors have said it will take a couple of weeks for the most sophisticated labs in Europe to make a positive determination.

(B)  I do not know that it was Bashar al-Assad’s forces who used the chemical weapons (and not the rebels, or for that matter, the Mossad) given the comprehensive evidence offered by the Russians and suggested by various UN investigators, evidence that at least prevents the sort of certainty necessary for waging war. Have we already forgotten Iraq?

(C)  Even if proof positive becomes available that it was Assad’s forces that used the chemicals, I do not know what would be accomplished by “limited”, “surgical,” “short termed,” missile attacks. How would it end the civil war? Foster stability in the Middle East? Save Syrian Lives? Further our National Defense?

(D)   I do not know how the Administration can guarantee that this war will be “limited” in its scope and means, (60 day duration with a possible 30 day extension), when Senator Kerry testified that no option (further escalation) is off the table and boots on the ground may be necessary should the situation “implode.”

(E)  I do not know what would be the United States’ response should Syria not acquiesce to being bombed and chose to defend itself militarily against U.S. interests, its forces, and/or its allies. Would the Administration then have “justification” for unlimited “defensive” war against Syria?  Even after backtracking somewhat from his earlier statement, Kerry made clear that there will be no boots on the ground in Syria in “respect to the civil war.” He made no guarantees that further escalation (including boots on the ground) would not be a possible response to a Syrian “attack.”

“But there are also unknown unknowns – there are things we do not know we don’t know.”

This aspect of Rumsfeldian epistemology is perhaps most interesting and, in my view, most relevant to the issue at hand. If I may be so bold, in the interest of clarity, allow me to expand upon it somewhat.

“But there are also unknown unknowns – I KNOW there are things we do not know we don’t know.”

(A) I know I do not know that I don’t know the sorts of horrors that will be forthcoming once the dogs of war are released against Syria. A war with Russia, China, Iran? World War III?  Nuclear holocaust? Syria’s WMDs falling into the hands of Al Nusra?

Without having experienced war themselves or having forgotten in the case of Kerry, Hagel, and McCann, it is in this final aspect that those who rush to war are most deficient, or careless, or indifferent and condemnable.

In this article, I have offered a thought process that is logically and philosophically sound for determining whether to support or oppose war with Syria. Since we are a nation of laws, both International and moral, and since war is so morally and legally repugnant and must be avoided at all costs unless and until certainty can be established regarding just cause, last resort, etc., Rumsfeldian wisdom has made clear to me and to anyone who would look analytically and critically at the situation, that war with Syria is illegal, immoral, tactically and strategically unsound, not in our national interest, nor in the interest of the people of Syria, the Middle East, or the world.

What is ironic and perhaps, tragic, about this process, is that Rumsfeld himself was and is incapable of utilizing his own method to draw reasonable and logically sound conclusions from his arguments.