Paulson Book Tries to Explain What Happened During Financial Crisis…Get Your Autographed Copy Now Before He Turns Into a Saint!

ON THE BRINK is Hank Paulson’s first-person account of the catastrophic economic events of 2008.

From the man who was in the very middle of this perfect economic storm, Paulson puts the reader in the room for all the intense moments as he addressed urgent market conditions, weighed critical decisions, and debated policy and economic considerations with of all the notable players-including the CEOs of top Wall Street firms as well as Ben Bernanke, Timothy Geithner, Sheila Bair, Nancy Pelosi, Barney Frank, presidential candidates Barack Obama and John McCain, and then-President George W. Bush.

More than an account about numbers and credit risks have gone bad, ON THE BRINK is an extraordinary story about people and politics-all brought together during the world’s impending financial Armageddon.

As Paulson tells it “The pace of events during the financial crisis of 2008 was truly breathtaking. In this book, I have done my best to describe my actions and the thinking behind them during that time, and to convey the breakneck speed at which events were happening all around us.” He continues “I believe the most important part of this story is the way Ben Bernanke, Tim Geithner, and I worked as a team through the worst financial crisis since the Great Depression. 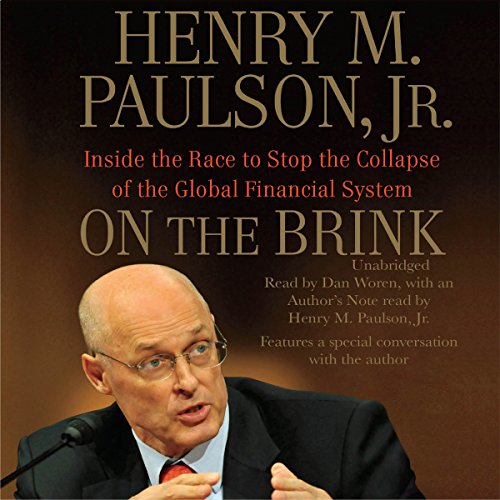 There can’t be many other examples of economic leaders managing a crisis who had as much trust in one another as we did. Our partnership proved to be an enormous asset during an incredibly difficult period. But at the same time, this is my story, and as hard as I have tried to reflect the contributions made by everyone involved, it is primarily about my work and that of my talented and dedicated team at Treasury.

On the Brink is basically a diary of Paulson’s time as Treasury Secretary, which ran from 2006 to 2008. That, of course, encompasses the most dramatic period of the financial crisis, running from when things started coming unglued in 2007 to the point at the end of the Bush administration when the financial markets were just about finally stabilized. The book details the sequence of events which covers the Bear Stearns take-over, the Lehman collapse, the receivership of Fannie Mae and Freddie Mac, the AIG bailout, TARP and just about everything in between.

This is NOT a history of the financial crisis. Paulson doesn’t really get into the “How did we get here?” in any dedicated or focused fashion (for something more along those lines you may want to read Financial Shock by Mark Zandi). This book is Paulson telling the story of how the Treasury, the Fed, the FDIC, the SEC, Congress, the President and others worked together to try to resolve the problems facing the financial markets during the timeframe in question from his perspective. As such, one may be inclined to think of it as an individual trying to establish his legacy.

He doesn’t bother to address why – when the government had tremendous leverage in working out the bailout of AIG – it did next to nothing in holding banks like Goldman Sachs accountable for their poor decision-making. So AIG, propped up by American taxpayers, paid 100 cents on the dollar for the credit default swaps purchased by Goldman Sachs.
These swaps in themselves were a suspect approach to managing risk. Moreover, the government never required the investment firms – whose senior management made atrocious gambles – to replace these inept executives (such as GS’s Lloyd “We’re doing God’s work” Blankfein) although they didn’t hesitate to take out the head of GM (Rick Wagoner)when we bailed out the auto industry.

So how to explain Mr. Paulson’s role in all this and his self-justifying apologies for greed?
Well here’s an astonishing coincidence: he’s the former CEO of Goldman Sachs. Surprise, surprise! And another tidbit about where Mr. Paulson acquired his ethical compass: he was a special assistant to John Ehrlichman in the Nixon White House.

I invite people to read this book, but I would advise against attaching any credibility to Mr. Paulson’s view of the near collapse of our financial system.

Purchase on Amazon.com: On the Brink: Inside the Race to Stop the Collapse of the Global Financial System

Henry M. Paulson, Jr. served under President George W. Bush as the 74th Secretary of the Treasury from June 2006 until January 2009. Before coming to Treasury, Paulson was Chairman and Chief Executive Officer of Goldman Sachs since the firm’s initial public offering in 1999. He joined Goldman Sachs Chicago Office in 1974 and rose through the ranks holding several positions including, Managing Partner of the firm’s Chicago office, Co-head of the firm’s investment Banking Division, President and Chief Operating Officer, and Co-Senior partner.

Prior to joining Goldman Sachs, Paulson was a member of the White House Domestic Council, serving as Staff Assistant to the President from 1972 to 1973, and as Staff Assistant to the Assistant Secretary of Defense at the Pentagon from 1970 to 1972.
Paulson graduated from Dartmouth in 1968, where he majored in English, was a member of Phi Beta Kappa, and an All-Ivy, All East football player. He received an M.B.A. from Harvard in 1970.