Home Government Will Obama Stand Up To Netanyahu on Iran? 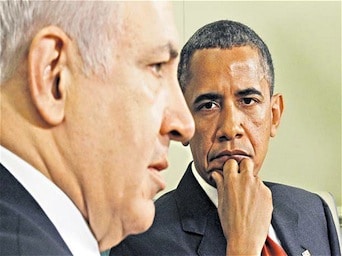 Let’s hope President Obama defends his opening with Iran from the inevitable assault by Israeli Prime Minister Benjamin Netanyahu when they meet Monday.(September 30)

They appear certain to clash over Obama’s historic good will phone call last Friday to Iran’s new President Hassan Rouhani, a leader who earlier indicated his willingness to make a fresh start at negotiations with the West.

No sooner had Rouhani sent world Jewry Rosh Hashana greetings via Twitter, exchanged letters with Obama through the Swiss, etc., than Netanyahu dismissed these harbingers as a superficial “charm offensive.” One wonders what the new Iranian leader would have to do to satisfy Netanyahu that he is in earnest? “One must not be fooled by the Iranian president’s fraudulent words,” Netanyahu said.

Obama’s call shattered 30 years of total diplomatic silence between the two nations and the ensuing sound waves are being welcomed by many world leaders.

McClatchy predicted both Obama and Rouhani “are likely to encounter fierce resistance from domestic opponents and close allies.”

In America’s case, hostility to rappprochement may irritate the Pentagon, which, as far back as 2003, had drawn up plans for an attack on Iran, according to Professor Michel Chossudovsky, Professor of Economics and Director of the Centre for Research on Globalization, Montreal, Canada. The battle plan included both conventional and nuclear weapons.

Pro-war advocacy may also come from the U.S. military-industrial complex, a corporate consortium that has raked in record profits during the Iraqi invasion and occupation. Some of its executives would welcome a continuing state of tension, if not outright hostility against Iran, that would reinforce the Pentagon demand for weapons systems paid for out of its swollen $700 billion budget.

The two entities most favorable to dispute settlement with Iran are, according to the polls, the Israeli and the American peoples. According to a report in “Israel News” a year ago April by Anshel Pfeiffer, “only 19 percent of Israelis would support a strike (against Iran) without American backing” and only 34 percent were against striking in any case” (whether the U.S. is aboard or not.) In another poll about the same time, the Program on International Policy Attitudes and the University of Maryland concluded that only one in four Americans favor an Israeli attack on Iran’s nuclear facilities while an impressive 70 percent favor a diplomatic solution.

Perhaps this last is the reason Obama is willing to buck Netanyahu—because he knows he has overwhelming support of the American people for peace. I don’t know what the average American Man On The Street thinks he or she has gained from the U.S. invasions of Afghanistan, Iraq, and Libya, or from the fighting in Pakistan, but I don’t think it’s much, if anything. Meanwhile, Joe American does know his wallet is shrinking as the military industrial complex lives high on the hog while good jobs outside the defense sector in most areas are shrinking; while growing numbers are living in poverty and food stamps, and while the medical system for tens of millions of people is broken. Obama may recognize this better than anyone and so may have become, willy-nilly, a peace president in his legacy term.

Sherwood Ross in the past has worked as a publicist for the Centre for Research on Globalization. Reach him at [email protected])