Contrary to rumors of “conspiracy theory”, the Department of Defense first published “Chemtrails” in 1990 as the title to a chemistry course for new pilots attending the esteemed US Air Force Academy.

In etymological terms, the origin of a word is very important. Regardless the intended definition, history clearly shows the term “Chemtrails” originated at the US Department of Defense as the title for a Chemistry manual used at the Air Force Academy cadet training program in the early 1990’s.

The purpose of this post is to establish the term “chemtrails” was invented by the DoD for the Air Force Academy.   However compelling, we resist claiming that the title and/or content is directly linked to the covert aerosol geoengineering and “chemtrails” operation that has been infecting planet earth since the early 1990’s.  The course content, however suggests possible methods for manipulation of the earth’s atmospheric chemistry and conductivity, and could be construed as a course requirement for pilots who could be engaged in deploying chemicals into the atmosphere.

Definition – A: The Oxford Dictionary provides an accurate description of “chemtrails” even if they are unaware that the DoD is the “inventor” and original publisher of the word, “chemtrails”.

a visible trail left in the sky by an aircraft and believed by some to consist of chemical or biological agents released as part of a covert operation.

Origin: 1990s: blend of chemical and trail, on the pattern of contrail (Oxford Dictionary)

In 2001, US Rep., Dennis Kucinich introduced HR 2977 “Space Preservation Act of 2001”. The text of the Bill defines Chemtrails as an ‘exotic weapon”

Origin: Department of Defense title to a chemistry manual as required study for future pilots enrolled at the US Air Force Academy.

A Microfilm copy of “Chemtrails” is available through the Inter Library Loan system (ILL).  Exhibts and chain of custody is included below.

The complete 202 page Chemtrails manual is available for download – HERE or HERE (Large 28 MB file. Use right-click method to download)

About the Chemtrails Manual Cover

Method: An inter-library loan initiated by the Alachua County main library yielded a microfilm copy of the 1990 Chemistry 131 Manual used in training by the US Air force Academy. The lending institution was the William T. Young Library at the University of Kentucky as shown in the label below.

The microfilm was in acceptable condition, however the 1990 Chemtrails manual was scanned in 1992 under less than optimum conditions from a well-used original.

The Alachua County Library equipment was used to scan each of the 200 pages to digital *.TIF files. Photoshop was used to optimize each image to the smallest file size that would permit adequate resolution for on-line viewing. Each image was imported to a Microsoft Word page where the complete manual was saved to a 28 MB PDF file. (Portable Document File). 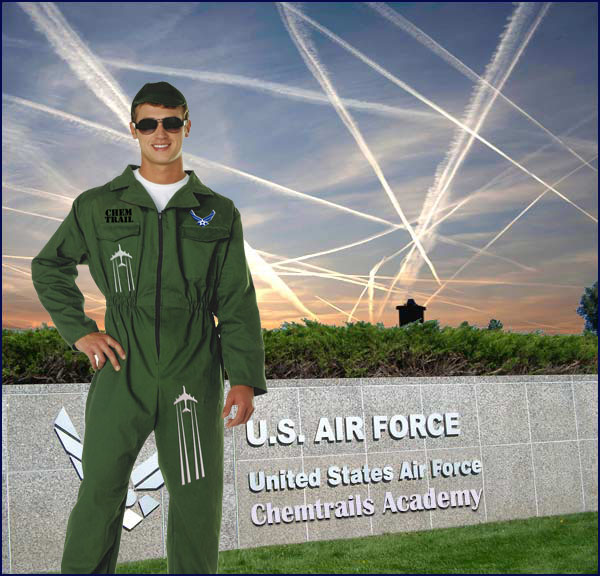