Israel has been trying to “undermine” ongoing nuclear negotiations between Iran and the world powers by putting more pressure on the United States to toughen sanctions against Tehran, an analyst says.

Link for the four minute audio interview is here. Embed would not work for some reason. 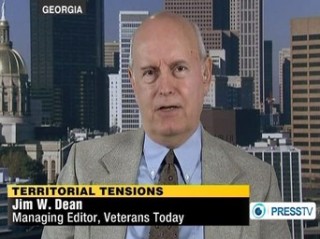 In an interview with Press TV on Thursday, Veterans Today columnist Jim Dean said there are some efforts by the Israel lobby in the US for using “military option” against Iran.

However, he said, the United States is now focusing on the peace in the Middle East because it is “critical” to Washington’s “economic survival.”

The US Senate is ratcheting up pressure on the White House to tighten sanctions against Iran in line with Israeli Prime Minister Benjamin Netanyahu’s demand for more pressure against Tehran.

Iran held nuclear talks with the United States, Russia, China, France, Britain and Germany in Geneva earlier this month. The two sides are set to meet again in Geneva on November 7-8.

Meanwhile, US Secretary of State John Kerry defended the talks with Iran in an apparent rejection of Netanyahu’s demand for more pressure against Tehran.

The top US diplomat said “some have suggested that somehow there’s something wrong” with giving diplomacy a chance. “We will not succumb to those fear tactics and forces that suggest otherwise,” Kerry said.