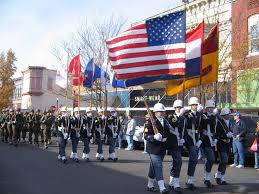 Now that the parades have ended and veterans have enjoyed the “heartfelt gratitude” of an appreciative nation (and a free meal, from a “select menu” at Applebees), I would ask veterans, as they resume their lives of anonymity and neglect, to put aside, for a moment, all the bunk we have been fed over the years from those who were not there. You know who I am talking about. The politicians, war profiteers, and “troop supporters” who cavalierly make and profit from war, cheer and wave flags as they send us off to fight, bleed, and die in some remote place for a cause we don’t understand. Self-proclaimed “patriots” who, while remaining safe at home, try to convince us that the threat to our way of life – to America and to freedom – is real and grave and that our sacrifices are necessary, noble, and glorious.

It’s not easy, I know, to ignore the mythology they create, and to separate fantasy from reality. Time and pain has seen to that. Maybe it is comforting to accept their lies and distortion of history. Perhaps it may even seem therapeutic, a means of readjusting, of coping with the memories and living with the experiences of war. After all, it’s easier and preferable to think oneself a hero than a dupe. Easier to believe our efforts and sacrifices were necessary and noble, rather than a mistake, a waste of lives and resources.

But down deep in places we no longer wish to go, dark places, frightening places, we know the truth. We lived it. We were there. We saw the insanity, the horror, the chaos, the suffering, and the death. Pause for a moment; try to remember what it was really like. We killed and were killed. We held our brothers and sisters in our arms, embraced them as they breathed their last breath. Their screams will forever echo in our minds. Final glances we will remember for the rest of our lives. Can you hear their cries? Can you smell the smells? Is the adrenalin flowing?  . . . Now think. Where is the fu$king glory, or the necessity? What is the purpose, or the strategy? What was accomplished? Can you remember the fear? The frustration? The futility? The waste? The profound sadness? The HORROR? Can you feel it? . . .  This is the reality of war, a reality that we know and those who make war try to hide; memories and knowledge that we have tried to forget, or suppress, or change.  This vulnerability they exploit, and from need and from the fear that our efforts and sacrifices and those of our comrades would be defiled or diminished should war be remembered as it truly was, we embrace their mythology.

While the truth may certainly be tragic and anxiety provoking, we must realize that the cost of a false sense of comfort is unacceptably high and that we forget or ignore the realities and lessons of past wars at our peril, and at the peril of our children. For those of us who have experienced the trauma and horror of the battlefield, or suffered the loss or injury of a loved one, accepting the truth about war, though difficult and disconcerting will ultimately prove uplifting and curative. When we have realized the deception and the mythologizing of war, and begin to see clearly, it becomes apparent that healing, our legacy, dignity, self-respect, and integrity, cannot be founded on fantasy, lies, and fabrications.

We who know war for what it truly is have a profound responsibility to again come forward, shoulder to shoulder, and bear witness to the truth about war. If our sacrifices and those of our brothers and sisters whose lives were cut short by war, are to have any meaning at all, we must raise our voices in unison and warn those who make war lightly, or are ignorant of its nature and consequences, and send other children to kill and die in battle, that we reject their mythology and their rhetoric of false patriotism and will not unquestioningly and blindly support unjust, unnecessary, and immoral wars.

Perhaps war is a reality that will not soon go away and sacrifices on the field of battle will again be required. But by demanding truth and recognizing war as it truly is, by questioning its purpose and necessity, by ensuring a clarity of vision rather than the blind compliance some wish to portray as patriotism, we will ensure that war remains a means of last resort, that no other person will again have to kill, die, or grieve the loss of their son or daughter for a cause that is misguided, and that those who dare to initiate such wars and connive to use deception and myth to encourage participation and support are held responsible for their crimes against humanity. Let us make this our legacy. Welcome home.

Camillo Mac Bica, Ph.D., is a professor of philosophy and ethics at the School of Visual Arts in New York City. His philosophical focus is in Applied Ethics, particularly the relation between war, morality, and healing. Dr. Bica is a former the United States Marine Corps Officer and veteran of the Vietnam War. He is a long-time activist for peace and justice, a member of the Vietnam Veterans Against the War, and Coordinator of the Long Island Chapter of Veterans for Peace. Dr. Bica serves on the National Advisory Board of the “Soul Repair” Center, a research and educational center whose primary mission is to the further understand and treatment of Moral Injury experienced by soldiers returning from war. In addition to his two books “Worthy of Gratitude: Why Veterans May Not Want to be Thanked For Their “Service” in War;“ and “Beyond PTSD: The Moral Casualties of War,” articles by Dr. Bica have been published in numerous philosophical journals and online alternative news sites.