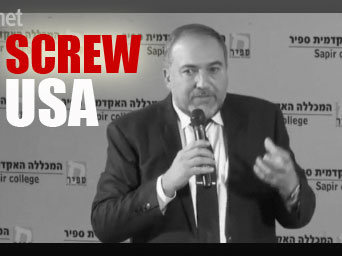 Shortly after returning* to his cherished chair as Israel’s Minister of Foreign Affairs, Avigdor Lieberman said “The relations with the USA is the angular stone, without it we won’t be able to manipulate[!] the current world.” This is a bit brutish, but expected. Soon he learned that things had changed since the last time he sat in his favorite chair. On November 20, 2013, he dropped his first political bomb of the season.

The USA-Israel love affair is cooling down. A few days ago, a leading politician close to Netanyahu said “Kerry Crossed a Red Line”, this was strengthened by an important lawyer who said “US Secretary of State is the enemy of the Jews”.

Lieberman’s bomb was dropped while French President Hollande was finishing a strategic visit to Israel, which was full of nuclear innuendos (French-Israeli Attack on Iran?). A fast student, Lieberman fixed his initial assessment. Israel does not need the USA anymore.

Afraid of the ricochets of his own words, Lieberman chose the Sapir College near Gaza as delivery point. Speaking at the Sderot Conference for Society, he knew that until he and his words reached the Jerusalemite political arena a new crisis would render them obsolete.

“In times when the relations with the USA are diminishing, Israel needs to search for new allies with common interests.”

“Americans are struggling with many challenges, problems in North Korea, in Pakistan, in Afghanistan, in Iran, in Syria, in Egypt, in China, and they have also their own economic problems. Thus, I ask what our place in the international arena is?”

While his rural audience was busy with more immediate issues, he continued “There is one Jewish country and 57 Muslim countries. From the start, we are in an inferior position.” Note that he assumes that peace is not possible and that all Muslim countries behave as one. “All countries search for investments or external help,” he added oddly.

Unable to coherently analyze reality, he moved to personal anecdotes. He told about his meeting with a current European Prime Minister while the latter was in the opposition. He didn’t identify him by name, but the reference to British PM Cameron is quite clear. “Back then he spoke about Israel and the Middle East as if he were a member of Yisrael Beiteinu’s [Lieberman’s extreme-right party] rightwing. Now, I see that he has adopted anti-Israeli positions.”

“I asked a common friend ‘How did this happen?’ He answered ‘What do you expect from him? He has unemployment, he has problems, and he needs investments and donors. These come from the countries in the Persian Gulf, Saudi Arabia and Turkey. So, what can we expect from him?’

“We don’t have such economic leverage. The relations USA-Israel is cooling down… Israel needs to search for new allies with common interests.

“We must search for those countries that do not run after the money, that do not need the Muslim World. These are countries in need of technological and agricultural knowledge. That is what we can offer.”

Lieberman is infamous for untimely and, to be frank, hallucinated declarations. In the past, he said “Palestinian Authority doesn’t exist,” while the government he was a member in was officially dealing with it.

He chose a remote place to deliver his bombshell, but his timing was less calculated. In two days, on Friday, USA Secretary of State will arrive at Jerusalem. Netanyahu, arriving from Russia, to where he travelled after French President left Jerusalem, will greet him.

Lieberman, you have a sapphire opportunity here to meet your American peer and tell him what you said in Sderot. Prove that you are a serious man. “Thank you for your cooperation all these years, here is a golden watch as thanks. Good bye!” Will you?

Author Details
Roi Tov
Roi Tov is a graduate—among others—of Tel Aviv University and the Weizmann Institute of Science. In addition to his memoir, Tov is published in the Proceedings of the National Academy of Sciences, Molecular Physics and other scientific journals. He won various travel writing and photography awards. In his writings, he tries to reveal life in Israel as a Christian Israel Defense Force (IDF) officer—from human rights violations to the use of an extensive network of underground agents. He was recognized first as a refugee and subsequently as political prisoner of Bolivia.
http://www.roitov.com
[email protected]
ATTENTION READERS
Due to the nature of independent content, VT cannot guarantee content validity.
We ask you to Read Our Content Policy so a clear comprehension of VT's independent non-censored media is understood and given its proper place in the world of news, opinion and media.