Our planet Earth has experienced five major species extinctions over the past billion years and the common denominator has always been a sudden acceleration in Global Warming with the rapid release of Methane being the most likely culprit:

Experts say methane emissions from the Arctic have risen by almost one-third in just five years, and that sharply rising temperatures are to blame ~ but very few people understand both the short and long range consequences for the planet in regards to a sudden increase in Methane emissions. 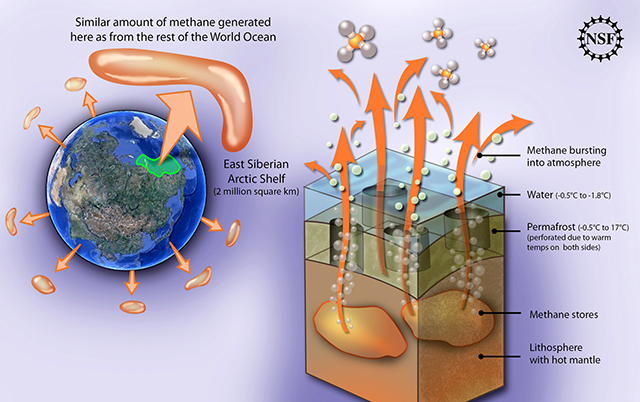 As the Guardian points out ~ “This recent discovery follows a string of reports from the region in recent years that previously frozen boggy soils are melting and releasing methane in greater quantities. Such Arctic soils currently lock away billions of tons of methane, a far more potent greenhouse gas than carbon dioxide, leading some scientists to describe melting permafrost as a ticking time bomb that could overwhelm efforts to tackle climate change.” See Guardian story ~

Lack of action in international climate change talks risks extreme weather events such as the typhoon that devastated the Philippines three weeks ago being repeated, Paddy Ashdown has warned.

The former Liberal Democrat leader said that the lack of energy at the UN climate talks, which wrapped up in Warsaw last weekend, left him “speechless.” Writing in the Guardian, Ashdown also said that climate change is contributing to extreme weather events, that the role of human-caused emissions in global warming is having fatal consequences and that typhoon Haiyan is a preview of what the future holds.

Now let’s move to the United States where a late November story by Seth Borenstein (Huffington Post) reveals that “The United States is spewing 50 percent more methane ~ a potent heat-trapping gas ~ than the federal government estimates, a new comprehensive scientific study says. Much of it is coming from just three states: Texas, Oklahoma and Kansas… The study estimates that in 2008, the U.S. poured 49 million tons of methane into the air. That means U.S. methane emissions trapped about as much heat as all the carbon dioxide pollution coming from cars, trucks, and planes in the country in six months. ”  See story

Now that I’ve confirmed the rapid Methane buildup both in the rapidly melting Arctic permafrost as well as domestically ~ let’s throw an historical fact into the equation to truly define the current ticking Methane mass extinction time bomb .

The Permian–Triassic (P–Tr) extinction event, informally known as the Great Dying, was an extinction event that occurred 252 million years ago, forming the boundary between the Permian and Triassic geologic periods, as well as the Paleozoic and Mesozoic eras. It was the Earth’s most severe known extinction event, with up to 96% of all marine species and 70% of terrestrial vertebrate species becoming extinct. It is the only known mass extinction of insects. Some 57% of all families and 83% of all genera became extinct. Because so much biodiversity was lost, the recovery of life on Earth took significantly longer than after any other extinction event, possibly up to 10 million years. This event has been described as the “mother of all mass extinctions.” 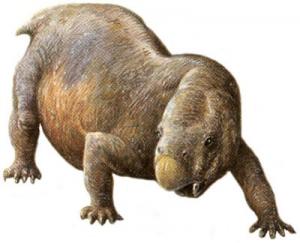 The Plant eating Dicynodon was one of few survivors of Permian Mass extinction 250 million years ago where 95% of all life died.

Now watch this must see BBC Documentary video  THE DAY THE EARTH DIED ~ which brilliantly describes the search by geologists throughout the world to discover the cause of this mass extinction event millions of years ago. At first they thought it was a giant asteroid ~ similar to the event that wiped out the dinosaurs 65 million years ago due to the after-effects of an asteroid impact off the Yucatan Peninsula.

So where are we now regarding Global warming? 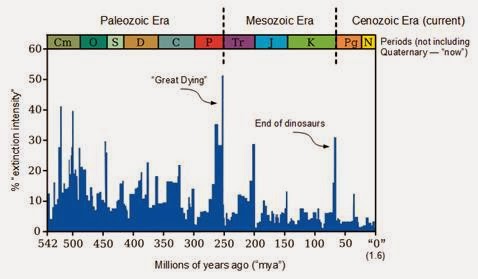 I agree with Gaius Publius who writes in America Blog We Could See 7 degree C (12 degree F) warming, and a mass extinction, by 2100~ and here’s why: No one is taking into account the consequences of a rapid Methane build up and resultant carbon 12 increase if the Methane emissions from the Artic permafrost continue to accelerate.    See Publius article

The sad realization for an apathetic world and main stream press is that we may already be beyond the point of no return ~ and many others agree.

We are upsetting the atmosphere upon which all life depends. In the late 80s when I began to take climate change seriously, we referred to global warming as a ‘slow motion catastrophe’ one we expected to kick in perhaps generations later. Instead, the signs of change have accelerated alarmingly. – David Suzuki