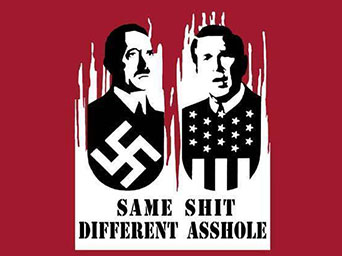 The “preventive war” propaganda used by President Bush to justify his attack on Iraq in 2003 copied that used by Hitler when he invaded Russia in 1941. Starting a preventive war was a foundation of the “Bush Doctrine.”

David Walsh, a contributor to the World Socialist Web Site, writes in a new book that the Nazi regime asked the German press to portray Hitler’s invasion of Soviet Russia as a “preventive war” that was “forced” on Germany. Walsh adds this propaganda tactic “did not originate with (George W.) Bush, (Dick) Cheney, or (Donald) Rumsfeld.” It was used by Hitler.

Writing in the new Dynamic Duo”(CWG Press), book, Walsh asserts, “In the American media there is barely a trace of serious analysis concerning the political and social realities of the Middle East. It long ago abandoned any sense of responsibility for educating and informing the public or carrying out the critical democratic function traditionally assigned to the ‘Fourth Estate’, i.e., serving as a watchdog and check on government abuses and falsifications.”

Walsh goes on to say that, “Instead it (the media) slavishly carries out the function assigned it by the ruling elite: to confuse, terrorize and intimidate the American public.” He explains how the TV networks and major dailies “are the prime source of news and information for tens of millions of people in the U.S” and are “in the hands of giant firms, controlled by fabulously wealthy individuals who will stop at nothing to defend their profits and property. The corpses of thousands, or, if necessary, millions of Iraqis, Syrians, Iranians and others are a small price to pay, as far as the media billionaires are concerned, for achieving American military and economic domination of the globe.”

The new book also claims that U.S. media put out false, and/or misleading information about the assassinations of President Kennedy and his brother, Robert; the 9/11 attacks on New York and Washington; and the plane crash that killed Senator Paul Wellstone, Minnesota Democrat, on Oct. 25, 2002.

Cable News Network’s anchor Wolf Blitzer said there’d been freezing rain and snow resulting in poor flying conditions when, in fact, “Blitzer was wrong. There was not only no snow, there wasn’t even any rain, much less freezing rain,” writes Dr. Jim Fetzer in the book. Fetzer is a distinguished professor of philosophy who believes the crash was no accident. He is well known as founder of Scholars For 9/11 Truth & Justice and as a radio talk show host.

Barrett writes that after the Madison, Wis., “Capital Times” published three of his articles about 9/11, the paper’s holding company “put them out of business.” What’s more, he added, Clear Channel fired Lee Rayburn, a former Madison, Wis., radio talk show host because he was doing good work on 9/11 types of issues.

Barrett points out that “It’s normally impossible to get a word of 9/11 truth onto Wisconsin public radio. They cut you off. They have orders to hang up on anybody who brings it up.”

The “so-called progressive media organs, like “The Progressive” magazine and the others, Barrett writes, are all “basically loyal opposition, they’ve all got seats at the table, and (are not) telling the truth about the JFK assassination, which involved the CIA, Lyndon Johnson, and very powerful people, and showed that ultimately decisions are made in our country by these nefarious powerful forces, not by elected officials as we like to think.”

Barrett asserts that Rachel Maddow (of MSNBC News) and Jon Stewart (The Daily Show) have to stay within prescribed limits “because if they don’t, then it’s pretty easy for the ideological secret police to destroy their careers, to attack them, insult them, and basically cause them untold grief.”

“The Dynamic Duo” book is subtitled “White Rose Blooms in Wisconsin” and is largely devoted to contributions of radio talk show hosts Barrett and Fetzer, who have done much to expose public officials who lie to the American public. The book’s author, Mike Palecek writes, “They have been working non-stop for years and years to give us the New American Dream,” a state that will emerge only when the old lies such as the official version of the JFK assassination are swept away.# (Sherwood Ross is a media consultant and award-winning journalist and poet who runs a public relations firm “for good causes.” Reach him at [email protected])