Home Veterans Are They Trying to Kill US All?

Obama Disregards Court Order on Antibiotic Use in Livestock 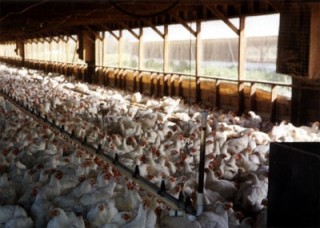 Nothing exemplifies more clearly the corporate takeover of democratic government than the Food and Drug Administration’s (FDA) approach to Food Inc’s routine use of antibiotics in animal feed. Thirty-six years after their 1977 finding that this practice jeopardizes human health, the FDA has given feed manufacturers three years to voluntarily remove antibiotic supplements from feed. What you won’t hear on the six o’clock news is that the the FDA move directly violates a March 2012 court ruling ordering them to ban the practice outright

Farm animals consume approximately 80% of antibiotics produced in the US. No one knows why routine consumption of antibiotics makes animals grow faster. Following this discovery in the 1950s, adding them to feed became standard practice on the gigantic factory farms that steadily replaced family farms. Producing animals that grow bigger and faster translates into higher profits. Especially in the overcrowded sheds and feedlots where fecal contamination creates the perfect breeding ground for harmful bacteria.

Pumping antibiotics indiscriminately into the environment turns out to be even more effective in breeding deadly antibiotic-resistant “superbugs,” which are subsequently transferred to people through their food. This was confirmed by an April 2013 FDA finding revealing that more than 80% of raw turkey, pork, beef and chicken contain antibiotic-resistant bacteria

The Centers for Disease Control (CDC) estimate that 2 million Americans a year contract drug-resistant infections every year, resulting in approximately 23,000 deaths. Prior to the advent of antibiotics in the 1940s, people routinely died of pneumonia brought on by flu and the common cold. It’s frightening to even think of returning to that era.

To curtail the spread of antibiotic resistant bacteria, the EU banned antibiotics in animal feed in 1998. In the US, meanwhile, the National Resources Defense Council (NRDC) launched petitions in 1999 and 2005 demanding the FDA launch a similar ban.  On learning of the FDA’s intention to opt for a voluntary ban, they, along with Center for Science in the Public Interest, the Food Animal Concerns Trust, Public Citizen, and the Union of Concerned Scientists, filed suit in federal district court. In March 2012, the judge ruled that the voluntary program violated the FDA’s statutory duty (i.e. was illegal) and ordered them to enact a total ban like the EU.

“[T]he statutory scheme requires the Agency to ensure the safety and effectiveness of all drugs sold in interstate commerce, and, if an approved drug is not shown to be safe or effective, the Agency must begin withdrawal proceedings. The Agency has forsaken these obligations in the name of a proposed voluntary program, Guidance # 209, and acted contrary to the statutory language.”

“[FDA] must evaluate the safety risks of the petitioned drugs and either make the finding that the drugs are not shown to be safe or provide a reasoned explanation as to why the Agency is refusing to make such a finding.”

So why, you might ask, is the Obama administration ignoring this obvious public health crisis, proceeding with a voluntary program and wasting taxpayer dollars on appealing the ruling? Obviously it has a lot to do with the Food, Inc lobby, which spent $71 million on campaign contributions and $95 million on lobbying in 2012. When our elected leaders place the wishes of their corporate benefactors over the welfare of their constituents, human life becomes very cheap.

I’m happy to report Representative Louise Slaughter (D-NY) is an exception. Slaughter, 84, has been in Congress since 1987. In March 2013, she introduced her Preservation of Antibiotics for Medical Treatment Act bill for the fourth time. The bill would ban non-therapeutic uses of medically important antibiotics in food animal production.

How the Public Can Help

My initial reaction to this total disregard for human life (are they trying to kill us all or what?)  is to go for the pitchforks. It’s clear from her interview with Food Safety News that Slaughter herself is pretty angry with the Obama administration.

However she proposes a more moderate approach, namely a public boycott of hormonally and antibiotic treatment animals.

“Food babe” Vani Hari, who also thinks the new FDA rule is a joke, recently appeared on CNN (which would lose their broadcast license for promoting insurrection) with recommendations on how consumers can avoid tainted meat.