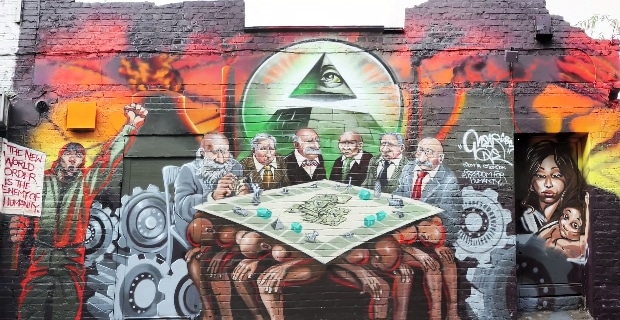 Welcome to the New United States of America; the Financial and Mentally Occupied territory of Zionism and the New World Order

They say the men who manage men manage and the men who manage money manage all.  And so it goes that the greatest coup in world history was not committed by an army holding a bayonet to the throat of some King. No, it was done quietly over time using finance as the weapon of choice and the media as its bullets. 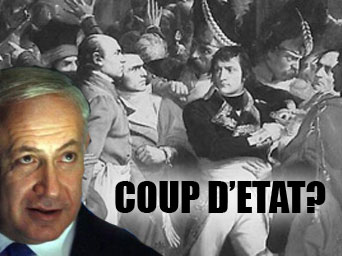 In fact, this coup d’etat is now the greatest in world history and 99.9% of Americans missed it because they were busy watching Justin Beiber on their “news” instead!

You know 25 years ago, my significant other, who is from a Latin American country and has NO special insight into politics, banking, or anything remotely knowledgeable about world affairs said to me “you know the USA’s greatest enemy is Israel and the Zionists who run it”. At the time, we were just in our early 20s, and I, being just a simple-minded musician out to party and still wet behind the ears said “What makes you say such a thing”?

I mean at the time, clearly, the USA had no enemies; so it seemed. It was the late 80s. The cold war was over! The big Soviet enemy was defeated and the Berlin Wall had just fallen. It seemed like all was perfect on that shiny city upon the hill that our made-for-TV hero of the day Ronald Reagan talked about while the seemingly mild-mannered President George H.W. Bush was about to declare that this will be a New World Order in his speech on September 11, 1991, ten years to the day before the attacks on 9/11.

Anyways, my significant other, when asked the question “why?” said “You know, I just feel it”.  Now, this is a woman who can smell things in the room that I cannot even fathom. She hears things in the night that I don’t hear. I believe you fellas know what I am talking about. You guys know that women have this thing, this intuition. They sense the danger of another woman approaching even when we cannot even see it or know it’s there. It really is in their DNA, isn’t it? 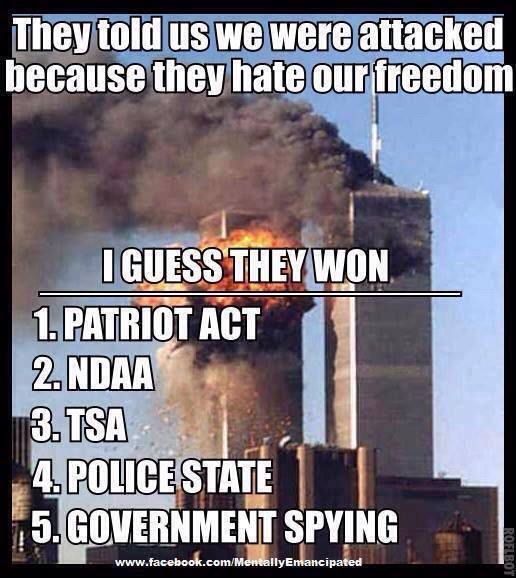 All of this was done without any fanfare or debate. Americans didn’t even notice. I mean, how could they notice? They were too busy playing with their latest NSA-sponsored app on their dumb, oops, I mean “smart” phone. And besides, Justin Beiber was on the table getting arrested and that sparked CNN and the other brainwashed channels to dish up some “Breaking News”.

Now, these are the very same Americans who, back in 2008, were completely and utterly robbed by these banksters of 99% of their wealth bankrupting almost every American household and turning them from mere wage slaves with just a few shekels of equity, 99% in their houses, to uber wage slaves for the system completely at the financial mercy of their masters wiping out any semblance of the middle class that was the driver of the great American 20th Century.  It was in Inside Job indeed committed by banksters at the highest level.  (watch the full documentary)

And Americans instinctively know it too. I mean, an NBC/WSJ poll was just released yesterday showing us that Americans Are Pessimistic About the Future.

Now, if you ask the average Joe, they still cannot make that direct connection as to who really robbed them or why they are so miserable because the truth is so unbelievable that the perpetrators get away with it unscathed. I mean, think about it. How many banksters were arrested for the greatest financial heist in world history? NONE!

Heck, I hear from the many who openly blame the working man from our largest neighbor and 3rd largest trading partner from the south for their woes. I mean, talk about a perfect crime. These folks have their hands in our collective pockets and many point to a guy working for $ 1 an hour picking tomatoes! Okay! Sure! Yep, that’s the thief.  Arrest him!

So where did these takeover peoples come from?

“Give me control of a nation’s money and I care not who makes her laws.” Mayer Amschel Rothschild

Well, it’s a long story that started a long time ago in Europe. And for the purposes of this article, it’s too long of a history. So instead, go study Mayer Rothschild and his family. Study the financial takeover of England back when Napoleon lost at Waterloo and that will give you a start. Then, go study about the US Bank from our earliest times and Andrew Jackson who threw them out. And then, finally study the current U.S. Federal Reserve and how it operates. That will give you plenty to draw from.

Now, moving forward, if you look hard enough you see all the signs of a coup d’état; a super long quiet one done methodically by collective synchronized organisms that infected the culture posing as normal when in fact, they were and remain deviant perversions of what was once an admiral political system.

You can point to the now out-of-the-closet entities such as AIPAC who now, after the fact, clearly boast that they control the USA. 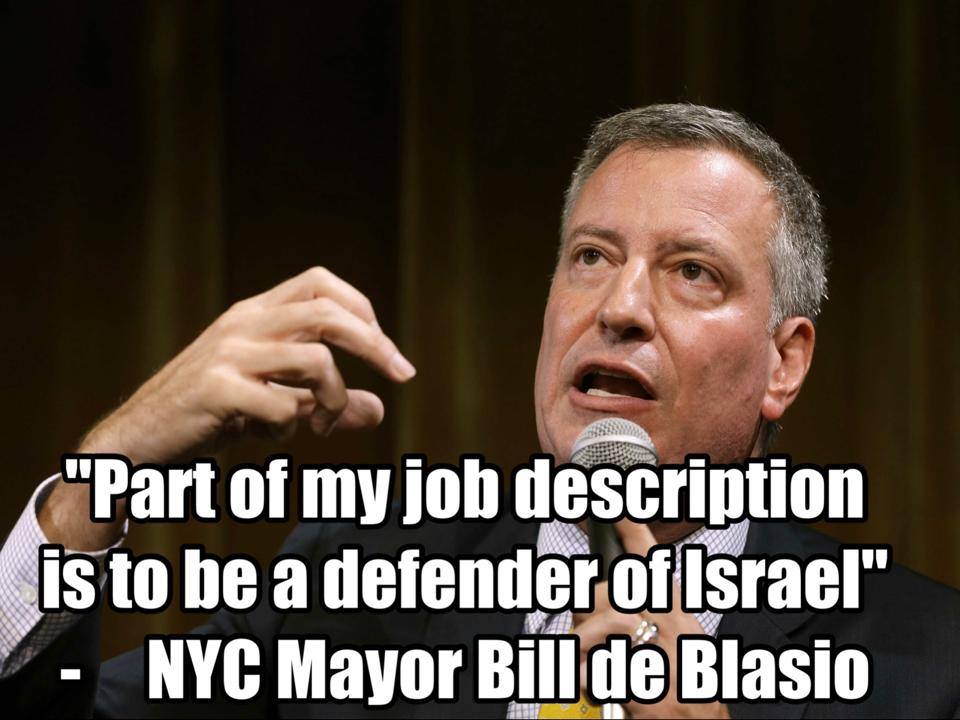 You can see it when, last week, New York City Mayor DeBlasio said in a closed-door speech to AIPAC that part of his job description is to defend Israel. Yes, he said it out loud. Israel! Not New York but Israel and nothing happened to this lackey.DeBlasio remains on the job with impunity!

And you can see it when the Prime Minister of Israel speaks to the supposed U.S. Congress getting 29 standing ovations; a reception that dominates the boos and heckles the current U.S. President gets when speaking to the same body of political whores. Obama is nothing compared to the Prime Minister of Israel. It’s a bad joke now because they used to keep it quiet but now, it’s out in the open. The contempt for America’s former sovereignty is in your face now.

I mean, the U.S. congress is about to pass a law that gives Israelis the right to enter the USA without Visas. And of course, American mainstream media is NOT reporting on this issue. FYI, Americans are NOT given the same reciprocation in travels to Israel. In fact, many are routinely told they cannot enter Israel. End of story!

Look, this was not a bloody coup on U.S. soil; well not too bloody at least. I mean on U.S. soil only thousands have been executed. All of them blamed “terrorism” giving Americans a nice re-direct to rally behind while their country was robbed blind and enslaved.

Yes, I am talking about 9/11; that lovely spark that gave us the draconian Patriot Act and other clampdown laws that ruined everything that the USA once stood for. I mean do you really think Al-Qaeda, a fabricated terror group of which the world’s greatest military could not find its so-called leader for 10 years? And when they finally did, we got no body, no DNA, no images, no reporters on the scene, no funeral, no nothing? How stupid do they think we are?

Well, I would say pretty stupid don’t ya think? Cause when President Obama announce his capture and subsequent dumping of his body to the sharks in the ocean before anyone in the world can view the so-called greatest terrorist ever, well Americans bought it just like always! Hey, Americans are still looking for those WMDs in Iraq, right? Okay, I think you get the point.

And that brings me to our times now.

We now know that we were all lied to on 9/11 and that WMDs were a ruse. And I assume by now you knew that the Osama Bin Laden character was a creation designed to give Americans a face they attach their emotions to while fighting a fake war for the elite. I mean, you do know that they do this stuff right? Okay, so what makes you think they are NOT doing it now? Did you magically think that was all history and now it’s all better? I hope not because right now, these people have completed the greatest coup d’état in world history. And they did it slowly and methodically with relatively minimal bloodshed so that no suspicions would arise.

Well the infamous and notorious frontman for The Clash, Joe Strummer, once said “the future is unwritten” giving us punkers optimism as he rocked into history as the leader of the only band that mattered. However, if Americans continue to bury their heads in the sand then yes, the script written for them goes on, and yes it is too late. I mean, for the American people to take back their country they would have to pull off the greatest comeback in world history. But how?

First, the American people will have to find a way to get their Congressmen to actually act in their best interests. But how? Who knows? Maybe Americans have to drag every congressman into the street and give them the proverbial Joe Pesci Vice Grip move from the movie Casino or something?

I mean, how else to get them to stop pandering to AIPAC? Americans cannot compete with their influence right?  Does anybody have Goodfella’s telephone number? All joking aside seriously speaking, America would have to demand the following from their government;

But you know the above ain’t going to happen. But it’s nice to hope, right?

I mean, do they just want to beat up the indigenous peoples of Palestine? Really?  Do you mean those poor saps who have rocks in their hands?  Come on!  These rag-tag powerless people are up against a Euro-Clan that has nukes at its disposal paid for by the US Taxpayer!  That is no match at all!  Israel is no victim and never has been!  They have always been Euro imperialist.  Herzl’s plan was 50 years before Hitler!  Is that really their ambition? Or is it something bigger, more profound?  And what does China say about this? Russia?

Billions of people on this planet are being manipulated, positioned, and ready for something much bigger folks. And the consequences will change our world. Welcome to the new world order!