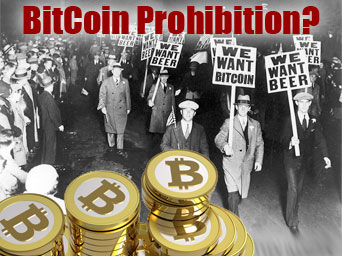 Fearful Panicking Government and Companies take aim to prohibit BitCoin as the Jedi Masters of the Cryto-Currency World Strike Back!

Recently I binge watched HBO’s Boardwalk Empire; a 5 season 100 episode saga about the 20th century U.S. alcohol prohibition and the gangsters it created.

Starring Steve Buscemi, this series was amazing and compelling. Notwithstanding the drama, the underlying foundation of the story outlines that, regardless of good intent, prohibition of morals and the freedom of peoples to live, eat, and trade is futile.

Fast forward to the here and now in our 21st century. The world is changing super fast as drug war laws not only in the USA but around the world are being usurped step by step in favor of education, freedom, and free will.

Of course, that brings us to crypto-curreny and Bitcoins; not exactly a moral conundrum – or is it?

Currently the world is being traded on government backed notes. But in reality, what’s really going is much more nefarious. Governments, especially the worlds reserve currency, the US Dollar, is being systematically devalued by, as they say, “printing” more and more just to pay of ridiculous growing out of control debt.

As a response to the banksters global ripoff in 2008, BitCoins arrived on the scene. This is the worlds first truly trans-global currency. It is making history as this spreads around the world panicking governments and central banksters everywhere!

And now here we go again!

Bitcoin Banned in Russia: Russia has announced that BitCoin cannot be considered an asset on the books and is discouraging use of BitCoin.

Apple bans final bitcoin wallet from App Store for its IPhone turning Steve Jobs over in his grave as they make they move from the most dynamic tech company in the world to a lethargic antiquated once was in one fail swoop. Ouch right?

As BitCoin Jesus, the head tech guy at BlockChain.info also known as Andreas Antonopoulos basically said and I loosely paraphrase “The only loser in prohibition are the prohibitors because BitCoin goes on and on and cannot be stopped by reactionary temperance movements”.

Well, heck, don’t let me paraphrase him at all! Instead, here’s what BitCoin Jesus actually says along with others in a heavy discussion about BitCoin and prohibition;

Check out the BitCoin Group on YouTube.com >>>

Find out How to Sign Up for a BitCoin Wallet at Blockchain.info