By Kevin Barrett, with Press TV 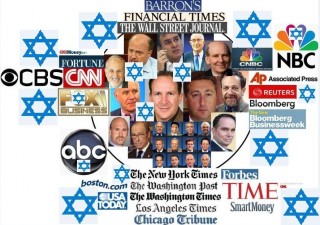 The expression “Israeli-Occupied Territories” normally refers to Palestine. But more and more Americans are speaking out about the “Israelification” of the USA – and wondering whether their country, too, is occupied.

On March 2nd through March 4th, the American Israel Public Affairs Committee (AIPAC) will hold its annual celebration of Zionist domination of American politics and media. The 2014 AIPAC Policy Conference at the Washington, DC Convention Center will attract thousands of fanatical Zionists – as well as an angry crowd of protestors.

Anti-AIPAC sentiment is spreading throughout all segments of American society. Even the American Jewish community, once a bastion of near-monolithic support for Israel, now includes a rising chorus of anti-Zionist voices.

A Jewish-American woman, Medea Benjamin, is a key force behind Code Pink’s “Boycott AIPAC” protests. The Code Pink Activists will protest AIPAC at the Washington, DC Convention Center on Sunday, March 2nd from 8:30 am to 8:30 pm with a special event from 2:00 pm to 4:00 pm.

The expression “Israelification of America” was popularized by one of the USA’s top foreign policy experts, Andrew Bacevich of Boston University. Bacevich points out that the US has “stumbled willy-nilly into an Israeli-like condition of perpetual war” with horrific consequences for the US economy and Constitution.

Bacevich’s notion of “Israelification” explains the recent American fascination with assassinations and killer drones. In his article “How We Became Israel” Bacevich points out that in the pre-9/11 era, when assassination was illegal in the USA, Israel had already made “targeted assassination…the Israeli way of war.”

Israel was the first to develop and use drones. Now it is the world’s largest drone exporter. Today’s wildly unconstitutional US drone killings are a symptom of America’s enslavement to Zionism.

Bacevich is correct: The US has indeed “become Israel.” But he is wrong about one thing: The US has not “stumbled willy-nilly” into Israelification.

There was nothing random or unplanned about the Zionist coup d’état of September 11th, 2001 which imposed near-total Zionist control on America. According to Stanley Hilton and Francis Boyle – both of whom studied beside neoconservative guru Leo Strauss at the University of Chicago during the 1960s – Strauss and his disciples, including roommates and Strauss intimates Paul Wolfowitz and Abram Shulsky, were even then planning to impose a sort of Zio-Nazi fascism on America through a 9/11 style event.

One neoconservative Zio-Nazi, Edward Luttwak, actually wrote a doctoral dissertation outlining the Straussian plan to overthrow democracy through a 9/11-style stealth coup d’état. Luttwak’s dissertation was published in 1968 as Coup d’État: A Practical Handbook. Italian journalist Mauricio Blondet, in his book September 11th: A Coup d’État (2002) explains that the neoconservatives used Luttwak’s Coup d’État as their step-by-step guide to staging 9/11.

The famous “dancing Israeli” Mossad agents openly celebrated the success of the 9/11 operation. They shared high-fives and took pictures of each other flicking cigarette lighters in front of the burning and then exploding Twin Towers.

But these and other Zionist celebrations of the 9/11 coup d’état were premature. While the Zionists achieved their near-term goals – beginning with a US attempt to destroy “seven countries in five years” on behalf of Greater Israel – they inadvertently provoked a backlash that will eventually sweep Zionism into the proverbial dustbin of history.

That backlash began just a few days after 9/11, when US Army Col. Donn de Grand-Pré and fellow military officers met to formulate a response to the 9/11 coup d’état. These patriotic American officers began a process that continues today at the US military and intelligence community’s voice of 9/11 truth, the on-line publication VT.

The disastrous failure of the 9/11 wars-for-Israel has created an anti-Zionist backlash. Though the Zionists try to ruin the careers and reputations of anyone who questions 9/11 or Zionism, they are finding it more and more difficult to build an “Occupation Wall of Silence” around these topics.

A few years ago, when professors like Steven Jones spoke out about 9/11, or journalists like Helen Thomas and Rick Sanchez criticized Zionist domination of the media, they could be driven from their jobs. This year, when Seattle Seahawks coach Pete Carroll questioned 9/11, nobody suggested firing him…and Carroll went on to win the Super Bowl.

For two decades AIPAC never lost a political battle. During the past year it has already lost two: Its attempt to trigger a US bombing of Syria, and its push for new nuclear-deal-killing sanctions on Iran.

In both cases, the Zionist-dominated media could not convince Americans to support yet another war-for-Israel.

The rise of the internet-based alternative media has made the Zionist death-grip on mainstream media increasingly irrelevant. The Zionist thought-policemen are panicking.

One leading Zionist thought-policeman, Mark Gardner, recently blasted the celebrity photographer Rankin for discussing who controls the media: “It’s allegations about Jewish power over the media that distinguishes anti-Semitism from other forms of racism. Rankin may well not be an anti-Semite, in which case he should learn not to spread the stink of anti-Semitic claims about Jews running the media and Hollywood.”

Why is it “anti-Semitic stink” to tell the truth? As Joel Stein explained in his L.A. Times article “Who runs Hollywood? C’mon” – and as everyone in Hollywood knows – “Jews totally run Hollywood.” Stein’s article names the big Hollywood power brokers and notes that virtually all are Jewish.

The same is true, in less extreme fashion, of the whole US mainstream media, including the big TV, magazine, and newspaper franchises. Former New York Times reporter Philip Weiss, now a leading blogger on Middle East issues, lays it out in his article “Do Jews Dominate in American Media? And So What If We Do?”

But perhaps we should be calling the people who dominate American media “Zionists,” not “Jews.” Judaism is a religion, while Zionism is a tribal political project. Most of the media-controllers are not religious. They are, however, devoted to their “Jewish state” in Occupied Palestine.

As Americans continue to lose confidence in the mainstream media, they will increasingly turn to alternative sources. And those sources, precisely because they are trying to provide an alternative to the mainstream, will continue to chip away at the Zionist occupation of the American mind.

So if you want to protest AIPAC’s faltering death-grip on America, do it this year. There is no telling how many more years AIPAC, and the Zionist entity it represents, will still be in business.