Home Veterans The Dance of the Dead

(SOMERDALE, NJ) – “The Dance of the Dead” is one the best horror/comedy movies of recent years.

The 18,329 deaths from all causes of Marines who were stationed at Camp Lejeune and Camp Pendleton from 1975 until 1985 are a real life horror story and not a laughing matter. The cancer deaths from both bases were 2,086.

In a February 19, 2014, article published in Environmental Health, “Evaluation of mortality among marines and navy personnel exposed to contaminated drinking water at USMC base camp Lejeune: a retrospective cohort study,”

Dr. Frank Bove, ATSDR epidemiologist, and other scientists reported that Lejeune Marines had higher cancer rates than those at Camp Pendleton.

The purpose of this study was to determine whether exposures of Marine and Naval personnel to contaminated drinking water at Camp Lejeune increased risk of mortality from cancers and other chronic diseases. 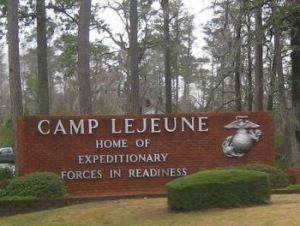 imilar Marines stationed at Camp Pendleton in California over the same period.

The  cancer deaths from both bases did not exceed the average cancer rate in the US population.

The CDC report described the details on the contaminants at Camp Lejeune:

The primary contaminant in the TT distribution system was tetrachloroethylene (PCE) with a maximum measured level of 215 micrograms per liter (μg/L). Also detected were much lower levels of trichloroethylene (TCE), trans-1,2-dichloroethylene, and vinyl chloride, created when PCE degraded in ground water over time. The TT system served approximately 1,850 family housing units on base during 1975-1985.

The primary contaminant in the HP distribution system was TCE with a maximum detected level of 1,400 μg/L. The maximum level of PCE was 100 μg/L, and benzene was also detected. Trans-1,2-dichloroethylene and vinyl chloride were present due to degradation of TCE in ground wate. During 1975-1985, the HP system served the “mainside” area of the base where a majority of bachelor’s quarters (“barracks”) and a few family housing units were located.

The Holcomb Boulevard system was a third system at the base, which served approximately 2,100 family housing units and was uncontaminated except for intermittent periods during dry spring-summer months when the HP system provided supplementary water. During a 2-week period in early 1985, the Holcomb Boulevard treatment plant shut down for repairs and the HP system provided water for its service area.

In each system, water from supply wells was mixed together at the treatment plant prior to distribution. Contamination levels in each system varied depending on the wells in use at a particular time.

What concerns me is the total number of deaths from cancers at these two bases.  These were not old men. The median age at the start of the study (1975) was 20 years for both Lejeune and Pendleton.  No one would deny that Marines are healthy and fit. They train for physical fitness.

For the total population surveyed at Lejeune and Pendleton, the survey reported 18,329 deaths from all causes out of a total survey population of 309,901 over ten years.

These are two Marine Corps bases with a population in good physical shape that passed the Armed Forces physical examination, periodic physical fitness tests, endured forced marches, and avoided narcotics. Many were members of varsity sport teams before enlisting in the Marines (about 95% were enlisted Marines).

Both Camp Lejeune and Camp Pendleton are EPA Superfund sites. These men (mostly men but some women) stationed at these bases were healthier than the normal population. Now they’re dead from cancers.

Something on these two bases caused the premature death of healthy young men and women. Maybe the conclusion is that living on a military Superfund site is hazardous to your health and young men and women should take this into consideration before enlisting in the military.

Camp Pendleton was selected for the health survey because it met the requirements for an external, unexposed comparison group, similar in all respects to the Marines and civilian workers at Camp Lejeune except for exposure to VOC-contaminated drinking water.

The Marine Corps denies responsibility for illnesses, injuries and deaths from the contaminated water at Camp Lejeune. Major General Payne, Jr., former Marine Corps Assistant Deputy Commandment for Installations and Logistics (Facilities), in Congressional testimony before the Investigations and Oversight Committee of the House’s Science and Technology Committee on September 16, 2010, stated that compensation could not be provided to veterans for “claims for illness, disease, or injury without a demonstration of causation [my emphasis] and we do not have that…”

The health survey was apparently intended to answer the basic question whether rates of cancer, birth defects, and other health problems are higher among Lejeune residents than they should be. Put another way – are they high enough to justify giving them medical benefits and disability when they are too sick to work as a result of exposure to toxic chemicals.

ATSDR says they selected Camp Pendleton for cohort study because the water wells were not contaminated with organic solvents like Lejeune’s. Pendleton Marines made an excellent cohort group shared a common characteristic and experience with Lejeune Marines.

Lenny Siegel, the executive director of the Center for Public Environmental Oversight and a nationally recognized expert on environmental contamination, told the San Diego Union-Tribune in November 2005, “If you look at Camp Pendleton in terms of risks to people, it is one of the more seriously contaminated military sites in the country.”

Camp Pendleton has been an EPA Superfund site since 1989. The number of toxic sites in 2004 was 208, according to the EPA. The San Diego Union-Tribune reported in a November 2005 new story, “Toxic woes fester at Camp Pendleton” that “there were more than 500 monitoring wells throughout Camp Pendleton [to] track the movement of contaminants and serve as the front lines for state, federal and Marine Corps agencies working to protect the 60,000 people who live and work on the base.”

One toxicologist, who asked not to be identified, told me that this study can only find out if the people who spent time at Lejeune have worse health problems in some specific areas of health than people who were at other contaminated bases.

We all know that Marines signed on for military service, even to die for their country. They deserve at least the truth, and medical care for hazards they endured is the only just way to go.

To get the crude mortality rate for the Camp Lejeune and Camp Pendleton cohorts, you have to divide the observed number of cancer deaths by the amount of person-years that the cohort was followed up.

So, the crude mortality rate for all cancers in the Camp Pendleton cohort is equal to 1,008 observed deaths divided by 4.19 million person-years which is 24 per 100,000 person-years.   For Lejeune it would be 1,078 divided by 4.14 million person-years which equals 26 per 100,000 person-years.  The crude mortality rate in 2010 for the U.S. is 186 per 100,000 person-years.  However, these are crude mortality rates that do not take into account age, race, sex, and the year of death.  Table 4 in the Camp Lejeune mortality study does take these factors into account.  When you compare the observed cancer deaths in each cohort with the “expected” cancer deaths based on the U.S. age-, race-, sex-, and calendar year-specific mortality rates, you obtain what is called a standardized mortality ratio (“SMR”) which is the correct way to compare these cohorts with the US rates.  The SMR for Pendleton is 0.78 and the SMR for Lejeune is 0.85.  SMRs that are less than 1.0 indicate that the rate in the cohort is less than the US rate.  This is what you would expect given that both cohorts are marines (who are much healthier than the general population) and were relatively young at the end of the study (i.e., most were under 55 years of age at the end of the study).

So, bottom line, at the end of the study both the Camp Pendleton and Camp Lejeune cohorts had a lower cancer mortality rate than the US population.  This may change as these cohorts get older [my emphasis].