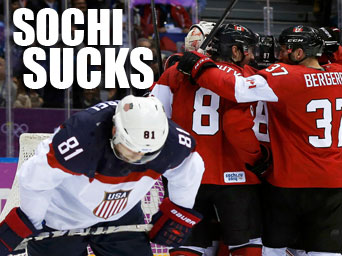 Collectively, the American delegation to the Sochi Olympic games in Russia have been under performing. From Shaun White’s disappointing exit in snowboarding to figure skating no medals to both men and women teams losing in spectacular fashion to Canada in Ice Hockey.

Overall the medal count is below what was expected. It has been very disappointing indeed.

But what is at play here?

First, let’s start with the clear deliberate bashing of Russia by the main stream American media. From the start, the media has been trashing Russia every chance it could. It was as if the Pentagon was giving the media its talking points.

I mean Russia could do nothing correct according to American media setting up the American public and the athletes for a bad vibe, a bad energy. Yes, I said it…. bad energy! And I mean it.

It’s really the law of attraction that plays its role.

And here’s how it works. First you think something genuine and it comes to you. So if you think Sochi is a horrible place and Russia a terrible country as the media wants you to think, then you reach back to the Soviet Cold War gene in the back of your spine to pull out that bad energy. And boom, your game is a bit off.

So who’s fault is it that the Sochi games have gone bad for the USA?

Well, I do not have the documents or evidence yet but it appears that the media who has bashed the host country fed by our beloved government who clearly has it out for Russia is the culprit.

But really, maybe it’s our fault. I mean before we start bashing others, maybe we need to get our own house in order. I mean, USA # 1 is a fun cheer but does it really have a credible mantra when;

And I can go on and on!  I mean the dam list is so long it would take me a whole week to write it up but you get the point. We need to clean up our mess before we go off on Russia and start projecting our failings on them. In short, it’s call personal responsibility.

The USA needs to change itself wholesale; from within and then project outward.  The good news is that sports can teach us.   I mean when a team fails, you reform, make adjustments, study the competition who is winning and make your move.  And simply, that’s what the USA needs to do both politically and culturally.

And as for the hard working great athletes, well if we simply continue to blame the world for our ills and not resolve and reform at home, well maybe next time they will all go all VIC WILD and renounce citizenship and become Russian because Russia supports its athletes with good energy and we don’t!

I mean after all, former American VIC WILD took home a gold medal for Russia while the USA took a puck to the face and a bitter pill called “Why don’t we join the human race, fix our homeland, and participate in the global successes of others instead of engaging in negative bashing”. Just sayin’!