Over the years, the Council of Europe’s activities to promote the cause of women have taken a number of forms, such as legal measures, mobilising public opinion and training and research.

One of the main threads running through all these activities is the principle that there can be no lasting solution to the social, economic and political problems of society unless women are fully involved in the process.

Women’s status, real equality, emancipation, sexually-related violence, the problem of women and disability and human trafficking are just some of the other aspects around which the Council of Europe has developed activities, such as awareness campaigns, all of which are intended to bolster legal equality of the sexes and make it a reality. 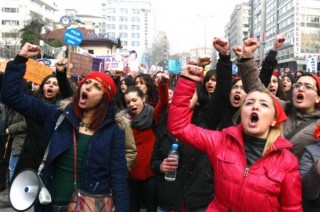 In 2009, women made up on average 28.6% of government ministers in Europe and 21.7% of members of parliament. This is slight progress compared with the 19.9% of women ministers in 2005, but there has been no change in their representation in national parliaments. Besides, the figures remain well below the 40% minimum recommended by the Council of Europe.

2013 – Time for action to end violence against women

Violence against women is an issue which concerns all countries in the world. It touches women from all walks of life, irrespective of cultural, religious, economic, social or geographical backgrounds.

It happens everywhere: in the “safety” of their own homes, at work, in the streets and in the media among others. Every day, women are stalked, harassed, raped, mutilated, forced by their family to enter into a marriage, sterilised against their will or psychologically and physically abused.

The examples of violence against women are endless, its victims countless. Many women are too afraid or ashamed to seek help, often paying for their silence with their lives. Those that do speak out are not always heard. With the adoption of the Istanbul Convention in 2011, the 47 member states of the Council of Europe made an important step towards the recognition of their responsibilities in addressing this concern.

Opened for signature in May 2011, the Istanbul Convention is the first legally binding instrument in Europe to prevent and combat violence against women and domestic violence. In terms of scope, it is the most far-reaching international treaty to tackle this serious violation of human rights. Preventing violence, protecting its victims and prosecuting the perpetrators are the cornerstones of the Convention, as is the requirement to co-ordinate any such measures through comprehensive and integrated policies. The Convention covers victims from any background, regardless of their age, race, religion, social origin, migrant status or sexual orientation.

The Istanbul Convention was drafted in Europe, but is not meant for Europe only. Any state can accede to it or use it as a model for national and regional legislation and policies. The Istanbul Convention will enter into force following its ratification by 10 countries. An independent group of experts (GREVIO) will monitor the implementation of the Convention.