Home Life A Call To Arms

My personal opinion is that the global financial system needs to be totally destroyed and forgotten as a bad memory. We need to replace it with a completely new and unrelated system.

Currently, the global economy functions in this way:

Central banks are in private hands, these central banks hold the gold reserves, therefore all states with a private central bank are in effect bereft of wealth, because it has been placed in private hands. The 288 tonnes of gold in the vaults of the Bank of England are not owned by the British state, they belong to the Trustees of the bank (shareholders).

Currency is issued by central banks on a debt basis, this is how the vast national debts have been created. Every dollar, pound or euro issued is actually borrowed by the government from the central bank and a rate of interest is paid on this, therefore the state is in debt to the central bank and that debt grows with every transaction. This is the crime of usury.

Therefore the entire concept of ‘money’ within our current financial system is fatally flawed and serves only to impoverish both the people and the nation states to the benefit of a small group of international financiers, principally the Rothschilds and including their vassals such as JP Morgan and the Rockefellers.

Whole nations have surrendered their power and sovereignty to these bankers, the US is a good case in point. Look at the BP oil spill, every aspect of which has been lied about and something covered up. The environmental damage is immense, and the majority of this damage is not due to the oil but due to BP’s use of the highly toxic Corexit dispersant. Corexit is banned in the UK, it is very dangerous stuff and actually does nothing to clean up the oil, all it does is disperse the large highly visible oil sicks, therefore giving the impression to the public that the spill has been cleaned up. The entire gulf is an environmental disaster zone, the future health implications due to Corexit are staggering, hundreds of thousands, if not millions of people are going to die as a result of BP’s actions. Obama and the US govt has worked hand-in-hand with BP to fool the US people, when Obama went swimming with his daughter in the gulf it was pure bullshit, he actually swam in a lagoon where there had never been ay oil, at the same time, the beaches of the Gulf were still covered in a lethal mixture of oil and Corexit. Why would Obama and the US govt do this? Simple, they are dependent on BP for oil to such a degree that they will do whatever BP wants. The massive US war machine uses more than half of the oil consumed by the US annually and most of the oil comes from BP.

It gets more convoluted that that, the same people who own the shares in BP own the shares in the company that makes Corexit and they also own Exxon. When the Exxon Valdez disaster occurred, the same coverups were carried out and the same massive use of Corexit occurred, the environment was damaged so badly it may never recover. Now you have to realise that the banking houses that are the shareholders in BP, Exxon and the Corexit manufacturers are the same ones that own the US Federal Reserve, the Bank of England and most other central banks around the world. This means that nation states and their governments are now enslaved and the world is really run by these banking houses.

Walther Rathenau in 1912, just before WW1 gave the game away when he told a reporter than ‘Europe today is run by a group of 300 Jewish bankers, all of whom are acquainted with each other’. 2 years after Rathenau’s arrogance got the better of him, those bankers plunged Europe into a catastrophic war, that war was the mechanism by which all of the powers of Europe were enslaved, the bankers stared the war then kept it going by financing both sides. They made immense profits at least 6 times greater than they were making in peacetime because they owned the armaments manufacturers and the mines that produced the essential coal and metal ores. WW1 marks the end of the old order and the beginning of the New World Order which has the total enslavement of the world’s population as it’s goal. The privatisation of the US Central Bank through the Federal Reserve Act occurred in 1913, that was the key factor that enabled WW1 as the Fed was needed to finance the war, it was the mechanism used to funnel the necessary funds to the warring parties.

So 2013 represents the 100th anniversary of the beginning of the New World Order. Somehow I am pretty sure that it won’t take another 100 years for them to complete this evil mission; it likely won’t take another 10 years, we are getting really close to the end which will come when global financial meltdown occurs and police states are imposed.

The only way that this New World Order can be stopped from completing it’s enslavement of the world is a mutiny among the military. A charismatic military leader must emerge that can rally a large portion of the military behind him and through direct military action, cut the head off the snake. This is becoming ever less likely as all the senior military leaders have been co-opted and are loyal to the bankers. Just look at the generals of the period since 1945, they have been political whores who did the bidding of the bankers and slaughtered their own men and civilians without conscience. Westmoreland in Vietnam, he oversaw large-scale chemical and biological warfare, the paper records of which have been hidden or destroyed, but a computer database of 1970 vintage contains over 2,000 instances of the use of CBU-15 (Sarin) by US forces and they openly admit to widespread use of other agents such as Agent Orange. Westmoreland also did nothing to oppose the CIA setting up a huge heroin industry which ended up addicting over 100,000 US veterans and untold millions of civilians. Schwarzkopf in the Gulf, he presided over large scale radiological and chemical warfare, the use of depleted uranium was a war crime, the battlefields remain polluted and will remain so for centuries, tens of thousands of servicemen will die from cancer in the future, many have already fallen victim to DU. Hundreds of thousands of birth defects in Iraq are due to DU, but it’s all been covered up. Then there is the poisoning of his own troops, hundreds of thousands of veterans have had their health and lives destroyed by the chemicals they were injected with and the pills they were made to take. 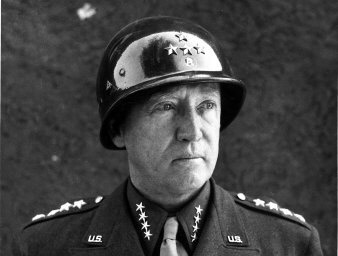 George S Patton, killed for knowing too much and being prepared to act on it

What we need is a figure like George S. Patton, a pure soldier who is fiercely loyal to his country and by extension, his people. Patton had zero interest in politics and thought all politicians were ‘lying sneaky yellow bastards’. Patton was a fiercely Christian man who spoke his mind exactly with no varnish or concern for how his words would be interpreted – he spoke the truth and spoke it plainly and directly. Eisenhower, Marshall and Truman made a huge mistake when they placed Patton in command of the US occupation zone of Germany after ww2. Patton immediately discovered the truth of ww2 – that the Germans were not Nazified at all, that the Nazis were a tiny minority and in Patton’s words, ‘the Germans are the last decent race left in Europe’. He also uncovered the truth about the Holocaust – that there were no death camps or mass killings, that much was obvious because there were Jews everywhere, picking over the corpse of Germany to steal whatever they could, Patton wanted to round them all up as the criminals they were, because he couldn’t stand to see what they were doing to the poor German people. Patton said that he wasn’t going to allow them to retire him when his duty in Germany was over, instead he was going to resign so that they couldn’t muzzle him. He intended to return to the US and completely destroy the myth of ww2 and the Holocaust and bring down the evil bankers and their political puppets who had created the whole mess. Patton had balls the size of Texas, he didn’t make idle threats, he was simply stating his plan of attack against an enemy he had discovered and when Patton attacked, he always won. That’s why they murdered him, because he had discovered the truth and it had pissed him off to such an extent he was going to do something about it, and a pissed-off George S. Patton is like the wrath of God.

I think the Patton incident (and the later MacArthur removal from command in Korea) taught the bankers and their political lackies the dangers of the military, therefore, when they finally declare a police state in the US, they will do it when the US military is occupied elsewhere in the globe and unable to intervene. The DHS has a private army that may number as high as 150,000, add to that all the agents of the DEA, CIA, ATF, FBI, US Customs, state police, local police and you can see what a huge force they have at their disposal, and with the hundreds of millions of rounds of ammo, the 8,000 military armoured vehicles and the military armaments and training they have been equipped with, they are definitely ready. To oppose them, what is there, the citizen’s militia movement was crushed in the 90s due to the whole Timothy McVeigh/Oklahoma City bombing farce, the national guard can be disabled with ease, and large portions of it will be abroad serving alongside the regular Army anyways.

That’s my take on it, I really don’t see how else the completion of enslavement and the imposition of the police state can be stopped. I see it happening as a second US Civil War, but the issue this time won’t be state’s rights and black slavery, it will be people’s rights and universal debt slavery. I don’t see it as a war that the people can win either, all the big guns are on the side of evil.