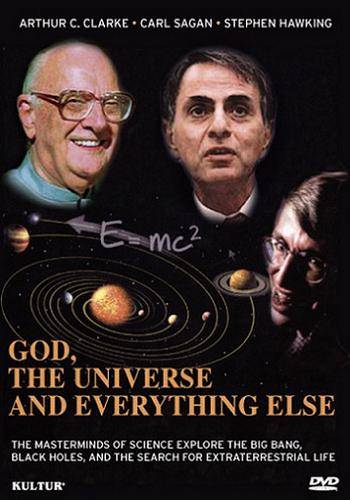 The late astrophysicist Carl Sagan, and British Science Fiction writer Sir Arthur C Clarke along with English theoretical physicist, cosmologist, and author Stephen Hawking candidly discuss the Big Bang theory, Black Holes, God, our existence, the Universe as well as the possibility of extraterrestrial life ~ brilliantly moderated by the late BBC Television Journalist Magnus Magnusson.  These three brilliant minds search for answers to our vast Universe which Sagan once correctly said is only bearable or understandable through LOVE ~ because love, I maintain, joins us to the innate thread of love and soul consciousness that lies deepest within each one of us and also to the basic uniting and healing force of the Universe, the Unified Field :

When we see GOD as a loving plan in action and each one of us as co-creators in that evolutionary loving plan ~ it becomes obvious to me that the principle property of my Unified Field  is that very same urge to unite which exists deepest within the basic molecule to galactic space itself through asymptotic freedom. It is then that I begin to understand that the Universe is also awaiting its call to unite, just as we most certainly are.

Teilhard’s law of complexity / consciousness explains the evolutionary basis of this loving plan and with each evolutionary leap in consciousness, there is a leap in complexity as well as resultant increase in the urge to unite. Teilhard’s theory of Plurality, union and energy also explains the Big Bang theory for when we all come eventually together ~ we will see that the Universe is doing precisely the same thing and driven by the same urge to unite.

Here’s this brilliant cast of characters you will  now experience ~

Arthur C Clarke established himself as a preeminent science fiction and nonfiction writer during the mid-20th century. He wrote the novels Childhood’s End and 2001: A Space Odyssey, which was also turned into a film with Stanley Kubrick. Clarke authored more than 100 books, and many of his ideas around science had links to future technological innovation. Clarke died on March 19, 2008.

Stephen Hawking is the former Lucasian Professor of Mathematics at the University of Cambridge and author of A Brief History of Time which was an international bestseller. Now Director of Research at the Centre for Theoretical Cosmology at Cambridge, his other books for the general reader include A Briefer History of Time, the essay collection Black Holes and Baby Universe and The Universe in a Nutshell.

Carl Sagan was an American astronomer, astrophysicist, cosmologist, author, science popularizer and science communicator in astronomy and natural sciences. However, he is best known for his contributions to the scientific research of extraterrestrial life, including experimental demonstration of the production of amino acids from basic chemicals by radiation. Sagan assembled the first physical messages that were sent into space: the Pioneer plaque and the Voyager Golden Record, universal messages that could potentially be understood by any extraterrestrial intelligence that might find them.

Where else could we bring together three great minds, two on them deceased, and show how their thinking, many years ago, could well be leading to a grand Unified Field or, as Hawking once said, there has to be something simple and profound about a grand unified field ~ and what could be more simple, yet profound than love.

Sit back and relax and watch these three brilliant minds lay the groundwork for my Unified Field of love and soul consciousness whose principle property is the universal urge to unite.

“If there were no real propensity to unite, even at a prodigiously rudimentary level, indeed, in the molecule itself, it would be physically impossible for love to appear higher up in the human form” Teilhard de Chardin