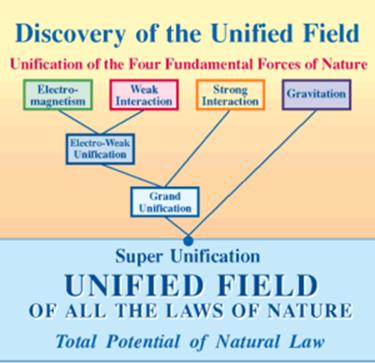 The basic underlying, uniting and healing force of the universe is a psychic energy field of love and soul consciousness (The Unified Field ) which lies not only beyond time and space but also beneath our deepest fears ~ and whose principle property is the universal urge to unite. It’s now on Kindle:

In physics, a unified field theory, occasionally referred to as a uniform field theory, is a type of field theory that allows all that is usually thought of as fundamental forces and elementary particles to be written in terms of a single field. Wikipedia

Here are the three basic tenets of my Unified field ~ which I fully explain in my book and Kindle EBook entitled RADICAL THERAPY. This is the Amazon Kindle link

The basic underlying healing force of the universe is a psychic energy field of universal love, within which gravitational and electromagnetic fields, the strong and weak forces in the atom, and all other forces of nature, including time and space, are merely conditions of state. Within this psychic realm of love, paranormal events such as clairvoyance, telepathy, precognition and near-death experiences are also conditions of state. The principal property of this field of love is its propensity to unite, complete and fulfill all living beings within a constantly evolving loving plan. This field of love is the absolute constant of the universe in that within it, time and space do not exist. Thus, we are instantly joined with the past, present and future of a universe which is in the process of uniting, completing and fulfilling itself.

It would appear that the pain of not feeling loved for oneself and being seemingly separated from our original state of soul consciousness and the Unified Field is of such deep psychic proportions that, early in childhood, processes are triggered in the hypothalamus which result in a left brain imbalance and dominance as well as the denial, mistrust and forgetting of our connection to the Unified Field and the love and joy and a state of soul consciousness deepest within us. It is from this dark tunnel of pain, aloneness, despair and apparent death that the ego and ego consciousness is born – for survival and protection purposes only. As such, death or the idea of death, is an illusion measured by the limits of our consciousness.

Think of the ego as a protective cocoon that is eventually meant to be shed. The Unified Field can be visualized as a grid of great luminosity joining all living beings within its energy field of love. The words of Longfellow would seem appropriate in describing this all-encompassing field or grid: “The thread of all sustaining beauty that runs through all and doth all unite.”

My title of my 1998 dissertation ~ The Unified Field ~ was a finalist in the Noetic Science/Common Boundary contest for papers relating to Spiritual Psychology ~ but was later changed to Radical Therapy (Surrender to Love and Heal Yourself in Seven Sessions, Not Seven years) for marketing and promotion reasons. It has now become a Kindle EBook.

My original intent was to use the title THE UNIFIED FIELD but promoting reasons prevailed and RADICAL THERAPY/ Surrender to love and Heal Yourself in seven sessions ( not seven years ) was published in 2002 ~ which combined both major points from my dissertation as well as my proven seven self-healing sessions.

The last 12 years have been spent proving its basic premise with my clients ~ especially combat veterans with PTSD who have been taught to hate and kill ~ and all of them have read this book as well as utilized the seven sessions during their individual heart centered self-healing process.

Approximately 66 active duty veterans have participated in my Band of Brothers Healing the Wounded Heart workshops with an astounding average of 60% improvement in all 21 symptoms of PTSD ~ particularly peace of mind, gratefulness and the ability to give and receive love.

Band of Brothers #11, in 2012, was both a culmination and affirmation that I was now fully participating in this loving plan as I facilitated the journey of five Gulf War veterans through their deepest fears, anger and unworthiness to a place of love, joy and gratitude and a new choice in life.

Make no mistake about it, the healing the Wounded heart workshops dealt with the re-opening of closed hearts through gratitude and forgiveness; seeing their life as a quest versus a struggle, and noting how every love relationship played its part in their individual journey to finally find, embrace and celebrate their authentic self as well as the capacity to fully love and receive love ~ and everyone, I mean everyone can relate to that quest.

Stephen Hawking wrote “there ought to be something both simple and profound about a grand Unified Field Theory“ ~ and what could be more simple and yet profound than Love.

The intent of book and eBook is to both heal and inform you ~ for within it you will discover not only a proven formula for self-healing ~ but also, these 12 major truths that could well change your perception of the world.

The twelve major truths this eBook reveals are as follows:

So what would it look like if the World suddenly realized that what was deepest within us and all living matter was love ~ or that the basic structure of the universe was LOVE.

We are looking at it right now ~ just scale the entire history of the universe (13.8 billion years) down to one calendar year, with January 1 marking the Big Bang. The stars would have formed on January 20, and the galaxies a few days later. Our sun didn’t appear until August 31; life on Earth first appeared on September 21. And humans? We didn’t show up until the last hour of the last day, December 31.

Our entire history would be contained in the last 14 seconds ~ and guess what’s fueling this incredible burst of complexity/consciousness ~ a Unified Field  of love and soul consciousness fueled by the universal urge to unite.

The great philosophical triumph of any unified field theory is implicit in the first word of its title.

For it will carry to logical fulfillment the long course of science towards the unification of man’s concepts of the physical world.

For from its august perspective the entire universe would appear as one elemental field in which each atom, each flying electron, each star, each wandering comet and slow-wheeling galaxy, is seen to be but a ripple or tumescence in the underlying space-time unity.

And so a profound simplicity would supplant the surface complexity of nature. Thus all man’s perceptions of the world and all his abstract intuitions of reality would merge finally into one, and the deep underlying unity of the universe would be laid bare.  Lincoln Barnett

The deep underlying unity of the universe has always been about love and the universal urge to unite. Surrender to love and find that same magic deepest within yourself ~ as well as your part in this universal loving plan.