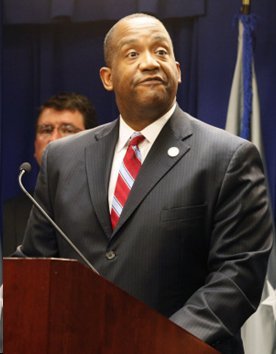 President Barack Obama continues to insult and denigrate America’s disabled and homeless Military Veterans as he has nominated U.S. Attorney Andre Birotte for a Federal Judgeship in Los Angeles.

Now, President Obama is “rewarding” Andre Birotte for his fighting the ACLU lawsuit and homeless Veterans with his nomination for a Federal Judgeship.

Obama nominates US Attorney for Federal Judgeship in Los Angeles

Adding insult to injury in this shameful nomination, U.S. Senator Dianne Feinstein recommended Mr. Birotte’s name to the President for this lifetime appointment, which has to be confirmed by the United States Senate.

One of the nine illegal “sharing agreements” the VA has with non-Veteran entities is Veterans Park Conservancy, a wealthy homeowner group in Brentwood.

Senator Feinstein and Congressman Henry Waxman are major supporters of this infamous operative that has a 30-year rent-free agreement to build a public park on a billion-dollar 16-acre parcel of Veterans property.

The agreement is “unauthorized by law” and in 2007, Senator Feinstein aided and abetted in getting this illegal agreement approved on behalf of the wealthy and elitist homeowner group.

Fellow Americans, on behalf of our disabled and homeless Veterans who have been illegally exiled from these sacred grounds at the Los Angeles National Veterans Home, we must speak up and demand that President Obama drop this insulting and shameful nomination of Andre Birotte for a Federal Judgeship.

In addition, President Obama must demand that U.S. Attorney Birotte drop his disgraceful Appeal against the Federal Judgment so that we can move forward and build a new and modern Veterans Home on these sacred grounds and “Bring Our Homeless Veterans HOME.”

The Injustice of the Department of Justice
God Bless America and the Veterans Revolution!