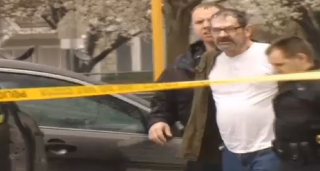 Sunday, on the eve of Passover – just as the feds were backing down from their standoff in Nevada – some idiot shot and killed three people outside a Jewish Community Center and a Jewish Retirement Home in Kansas City. Reports say that none of the victims were Jewish.

The suspect, a professional “notorious anti-Semite” and federal informant named Frazier Glenn Miller, reportedly was screaming “heil Hitler” as he was hauled off by police.

The shooting is a public relations bonanza beyond the wildest dreams of the ADL, the SPLC, AIPAC, and the rest of the Israel lobby. The media’s mighty wurlitzer is blasting out its usual tune hyping the dangers of the patriot movement – people not unlike yourself, gentle VT reader! Next time you try to tell someone about who was behind 9/11, who really runs the media, who are the real terrorists in Palestine, and so on, here is the response you’ll get: “Oh, you must be one of those crazy Jew-hating Nazis like Glenn Miller!”

One perfect PR incident like this is more persuasive than a million rational arguments. And the Zionists know it. They are experts at ginning up such “incidents” in service to their cause.

They also engage in the wholesale manufacture of “Jew-haters,” in real life and especially on the internet. You may have seen some of their drivel disgracing the comment sections here at VT. They are the people who hate all Jews because they are Jews. (OK, a few of these people may be real – you know who you are – but I’ll wager the great majority are sock puppets.)

According to CBS News: “The Southern Poverty Law Center, which tracks hate groups, said it reached Miller’s wife, Marge, by phone and that she said authorities had been to their home and told her that her husband had been arrested in Sunday’s attacks.” CBS and the rest of the media, however, was unable to get through.

Does Morris Dees have Glenn Miller on speed dial?

Dees and Miller have a long history. Miller served three years in the federal pen for plotting to assassinate Dees – and came out a federal informant…and a walking, talking advertisement for Dees’s obsessive, excessive fund-raising. Miller has been walking around ever since with a big sign on his back reading: “Dangerous racist Nazi moron – please send money to Morris Dees and the ADL so they can protect society from the likes of me.”

Then again, it’s possible that people can really be this stupid without outside help.

But everything about this incident – the timing, the choice of victims, the suspect being a “famous white supremacist” who also happens to be a federal informant – is, to say the least, suspicious.