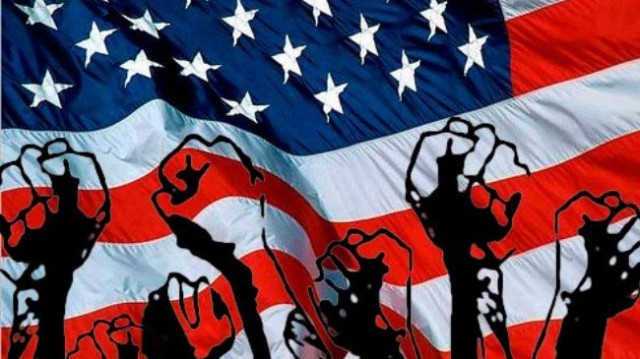 What does “democracy” mean?

To US leaders, it means overthrowing other people’s governments.

And these are only some of the better-known cases where the US successfully used force or fraud to put its puppets in power or remove leaders it didn’t like. There have also been dozens if not hundreds of unsuccessful attempts (such as the current war on Syria). And there have undoubtedly been many successful US-supported regime changes we don’t know about. After all, such operations are called “covert” for a reason: They are designed to remain secret forever.

And then, there are the so-called color revolutions: Ukraine (Orange), Lebanon (Cedar), Georgia (Rose), Kyrgyzstan (Tulip), Myanmar (Saffron), Thailand (Red), and Malaysia (Yellow). The US State Department, USAID, and George Soros apparently like their coups d’état in a pleasing array of hues.

All this in the name of democracy.

Overthrowing democratically-elected leaders such as Ukraine’s Yanukovych – and Chile’s Allende, Iran’s Mosaddeq, and so many more – is a very strange way of spreading democracy.

But there is one country that really does need a pro-democracy coup d’état: the United States of America.

Today, America’s phony democracy is rotten to the core. The US has had stolen presidential elections in 1980, 2000, and 2004. It has had nothing but CIA presidencies since 1988. And now the Supreme Court has ruled that elective offices are for sale to the highest bidder. From now on, the Court says, the public cannot put any limits whatsoever on political bribery.

And don’t get me started about assassinations. In 1963, when Americans allowed CIA operators (including Cord Meyer, Allen Dulles, James Angleton, E. Howard Hunt, David Atlee Phillips, Richard Helms, David Morales, Frank Sturgis, George H.W. Bush and others) to assassinate President John F. Kennedy in broad daylight with complete impunity, they for all intents and purposes gave up even the pretense of living in a democracy. Less than five years later, the same criminals killed JFK’s brother Robert – and added an exclamation point. The American people, drugged by television, emitted a collective yawn.

Today, when a courageous, intelligent, idealistic American like the late Minnesota Senator Paul Wellstone is elected to federal office, his life expectancy (and later his plane) takes a nose-dive.

The situation is unacceptable. The USA, born in a revolution against monarchy and imperialism, is a symbol of democracy. Its good-hearted, generous, somewhat naive people deserve better.

Call it the Red-White-and-Blue Revolution.

And make no mistake, a revolution is what America needs. There is no longer any hope of simply voting better people into office. The good candidates will be outspent, deprived of their victories by election fraud, and (if necessary) killed.

My friend, the late Col. Robert Bowman, Ph.D. was the best American candidate for federal office of the past two decades. Dr. Bowman ran for the presidency in 2000 and 2004. In 2006, running as an under-funded 9/11 truth candidate, he won election to the House of Representatives (FL-15) with over 55% of the vote according to exit polls. But black box voting machines anointed his opponent.

After being robbed of his victory, Dr. Bowman said he no longer had any desire to run in rigged elections overseen by black box machines. He recognized that America needs a democracy revolution.

Another first-rate American presidential candidate, Sen. Mike Gravel, also recognizes the need for a democracy revolution. Sen. Gravel, a leading opponent of the Vietnam and Iraq wars and a 9/11 truth supporter, thinks Americans should vote directly on initiatives (using hand-counted paper ballots) and make the laws themselves. You can learn more about Sen. Gravel’s National Initiative for Democracy at Vote.org.

How could an American democracy revolution begin?

The precursor to a democracy revolution: rising public awareness of the real state of affairs. By helping the public slowly awaken to the truth, the alternative media is setting the stage.

Either way, the first order of business would be to smash the “mighty Wurlitzer” propaganda machine and jail the criminals who currently run the mainstream media. Every politician who has ever taken a bribe (meaning a “campaign contribution” over $200) should also be jailed. And the Supreme Court, which has just removed the last limits on political bribery, should be tried for treason.

The private Federal Reserve cartel should be seized, and the ill-gotten wealth of the international banking cabal returned to the people.

The military-industrial complex and the intelligence complex should be smashed to pieces and scattered to the winds – heeding the warning of Dwight David Eisenhower, and fulfilling the promise of John Fitzgerald Kennedy.

“American glasnost” – exposure of past crimes of the deep state, and a redesign of both governmental and private power towards total transparency – should follow.

Phony US-sponsored “democracy revolutions” have overthrown dozens of governments around the world. Isn’t it time, as Malcolm X said in a different context, for “the chickens to come home to roost” – by way of a real democracy revolution in America?