Around 1900 the basic framework was being put in place for the industrial architecture that still shapes many aspects of our global civilization. Nikola Tesla, a Serbian immigrant who settled in New York City, was by far the most brilliant of the inventors to emerge at a time when it was possible to conceive and apply whole new complexes of technology on rapidly expanding frontiers of science.

Tesla worked with George Westinghouse on Alternating Currents, AC. Their endeavors along these lines far outpaced the development of Direct Current, DC, by Thomas Edison and his General Electric Company. After winning the contract to electrify the lighting system at the World’s Columbian Exposition in Chicago in 1893, Tesla’s AC system was quickly adopted as the standard for electric utilities first in the United States and then throughout the world.

Fossil fuel magnet, John D. Rockefeller, reacted to the growing popularity of electric illumination, which preempted the oil-based technology of kerosene lamps, by backing Henry Ford’s motor car company. Ford’s Detroit-based enterprise would help entrench the gas-guzzling internal combustion engine as the primary medium of ground transport. Rockefeller backed Ford because he feared Tesla was about to limit the scale of the fossil fuel industry by mapping out a way to manufacture and propel cheap electric cars. 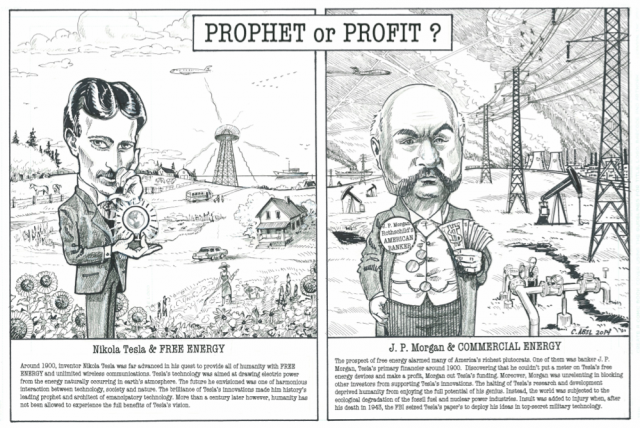 Beginning with the construction in 1894 of power stations run by the descending waters at Niagara Falls, Tesla and Westinghouse entrenched their system for generating, transporting, and using huge amounts of AC electricity. At age 38 Tesla was just beginning the most fruitful part of his career in applying breakthroughs in science, including some of his own discoveries, to the development of paradigm-shifting technologies.

In his legendary public presentations Tesla introduced many new theories, including those that enabled him to display dramatically wireless systems of electric lighting.

For a time many of the leading financiers of the day vied with one another to invest in Tesla’s projects. Eventually the most important US banker of his generation, J.P. Morgan, became Tesla’s exclusive backer during the period when he experimented most actively using the earth itself rather than wires for conducting electrical current.

First at Colorado Springs and then with his Wardenclyffe installation on Long Island New York, Tesla worked on ways for drawing electricity from the ionosphere, the earth’s outer atmosphere. He combined his work on tapping naturally-occurring systems of electrical interaction with wireless means for communicating text, pictures, and sound.

Morgan is said to have turned against Tesla’s work when he realized the scale of its revolutionary implications. The financier, who was a conduit between the Rothschild banking family’s European and American interests, complained famously that Tesla’s technological innovations were problematic because it was not clear how meters could be imposed for the buying and selling of energy.

Morgan could easily see that Tesla’s main motivation was not to make money. Rather it was to emancipate humanity with new forms of technology that would liberate people from darkness, drudgery, and various forms of top-down oppression. Neither Morgan nor the class he represented shared Tesla’s goal of conducting research and development to make life easier and better in ways that operate within, rather than against, prevailing patterns of nature, including what is best in human nature.

Tesla suffered a nervous breakdown after 1904 when Morgan betrayed him. Tesla’s famous tower and laboratory at Wardenclyffe were subsequently destroyed even as Morgan placed many obstacles in the way of the inventor’s ability to gain backing from other financiers.

The next four decades of Tesla’s life remain shrouded in mystery. Some believe that Tesla fully recovered and returned to his work covertly with a new set of secret collaborators. Some believe his secret inventions include devices for teleportation and communication with other life forms in the universe. Whatever transpired, the FBI intervened to seize his papers and prototypes when Tesla died penniless in New York in 1943.

There is good reason to believe that to this day the US military continues to exploit Tesla’s inventions and theories in ways that directly violate the animating philosophy of the person who was, perhaps, the most gifted and enlightened inventor ever given to humankind.

One of the best examples of such a military abomination is HAARP, the High Frequency Active Auroral Research Program based in Alaska. Rather than following through with Tesla’s  goal of deriving electric power from the ionosphere to provide humanity with free energy, HAARP has become a vehicle to advance the goal of what the US Armed Forces has described as “full-spectrum dominance.”

Among those systems of electromagnetic warfare being developed by HAARP’s technologists are, quite likely, devices to assist in the geo-engineering of weather patterns and the targeted generation of earthquakes. Such hostile interventions in the harmonious workings of nature run against everything that Tesla stood for.

Looking back it seems clear that humanity was forced in the early 1900s into a very wrong turn when it came to establishing the basis for systems to generate, transform, and use energy. While his early innovations were adopted as the basis of AC systems of global electrification, Tesla’s most advanced theories and inventions were eschewed in order to keep the way open for further development of less sophisticated but more profitable means of running the engines of commerce.

The consequences of our wrong turn in the early 1900s are showing up in the grotesque obscenities entailed in the derivation of energy from ecologically-disastrous activities like fracking and mining the Alberta Tar Sands. Most illustrative of the the utter insanity of the energy business as presently constituted is the slow motion holocaust of radioactive contamination being spewed into earth, air and ocean at Fukushima. This global disaster is still in its infancy.

Much depends on revisiting the wrong turn forced on humanity during the early years of the twentieth century. We still have it in our power to return to Nikola Tesla’s vision of a global political economy of peace, harmony and equity. How many other inventors after Tesla have seen their offerings of emancipatory technology spurned and repressed because of obstructions thrown up by vested interest hostile any progressive changes that might negatively affect the bottom line?

We still have it in our collective power to turn away from the vision of for-profit energy historically promoted by the likes of Morgan, the Rothschilds, Rockefeller, Edison and Ford.

Anthony Hall is Professor of Globalization Studies at University of Lethbridge in Alberta Canada where he has taught for 25 years. Along with Kevin Barrett, Tony is co-host of False Flag Weekly News at No Lies Radio Network. Prof. Hall is also Editor In Chief of American Herald Tribune. His recent books include The American Empire and the Fourth World as well as Earth into Property: Colonization, Decolonization and Capitalism. Both are peered reviewed academic texts published by McGill-Queen’s University Press. Prof. Hall is a contributor to both books edited by Dr. Barrett on the two false flag shootings in Paris in 2015.

Part II was selected recently by The Independent in the UK as one of the best books of 2010. The journal of the American Library Association called Earth into Property “a scholarly tour de force.”