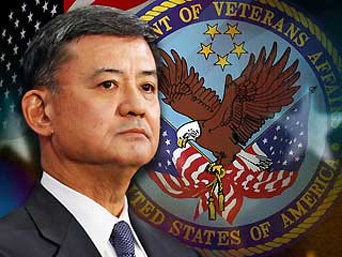 Eric K. Shinseki continues to deceive not only our Nation’s Veterans, but “We the People” of the United States by saying he is serious about resolving the never-ending crime, corruption, incompetence and cover up by his out-of-control Department of Veterans Affairs (VA).

Mr. Shinseki is now trying to hoodwink the general public into believing that he had no knowledge of the reported Phoenix VA’s murderous and catastrophic “death list” by purporting that he takes these “allegations” seriously and then placed a few VA employees on administrative leave until further notice as he awaits an Inspector General’s decision.

In his trumped-up statement, Mr. Shinseki declares: “We believe it is important to allow an independent, objective review to proceed. These allegations, if true, are absolutely unacceptable and if the Inspector General’s investigation substantiates these claims, swift and appropriate action will be taken. “

What a crock of crap! We already know that the pre-determined “decision” will be tantamount to Benghazi – “no mistakes were made and the VA did all they could to help our Veterans.”

Moreover, Mr. Shinseki irresponsibly denies the rampant crime, corruption and incompetence in his Department by constantly defending it and then glorifying this as the norm for public service with hollow “I CARE” and “EXCELLENCE” slogans while awarding bonuses for failure.

Reinforcing the known illegal activity at the Los Angeles VA, the ACLU armed with invincible evidence filed a landmark lawsuit against Mr. Shinseki and his Los Angeles VA director Donna M. Beiter for illegal use of Veterans property that was exclusively deeded to the U.S. government in 1888 to be permanently maintained as a National Home for disabled and homeless Veterans.

To no one’s surprise, Mr. Shinseki defiantly fought the lawsuit with an overzealous army of U.S. Attorneys of the Department of Justice.

To no one’s surprise, Mr. Shinseki and his team of government lawyers lost as U.S. District Judge S. James Otero entered a Federal Judgment against the Secretary of the VA for what everyone already knew, that he and co-defendant Beiter had engaged nine non-Veteran entities with illegal real estate agreements that were adjudged as “unauthorized by law and therefore void.”

The ACLU allegations Mr. Shinseki were “true and substantiated” by a Federal Judge that confirmed that his illegal conduct was “absolutely unacceptable.”

But instead of swift and appropriate action being taken such as acknowledging fault and agreeing to build new housing for our disabled and homeless Veterans, Mr. Shinseki arrogantly thumbed his nose and appealed this iron-clad Court decision. And he’s doing this at the added expense of the American Taxpayer and the prolonged misery of tens of thousands of homeless Veterans in Los Angeles.

Make no mistake; Mr. Shinseki will do the same to the Inspector General’s decision because he considers himself above the law and will continue to deny any wrongdoing.

Think about it, if Mr. Shinseki is not going to honor the legal Deed of 1888 and a Federal Judge’s decision that adjudged him of illegal use of this same deeded Veterans property, why would anyone expect him to respect and honor an Inspector General’s decision if it concluded that the VA under his supervision murdered 40+ Veterans through their “deny, deny, deny until our Veterans die” death-list manifesto of abuse and mistreatment?

How many more Veterans will be murdered or commit suicide under Mr. Shinseki’s failed leadership?

It’s a given that President Obama will not fire Mr. Shinseki because his own Department of Justice is defending him.

Members of the Senate and Congress are too weak to demand that President Obama fire Mr. Shinseki.

The FBI will not investigate and prosecute because its own overlord, the Department of Justice, is fighting the ACLU lawsuit and the subsequent Judgment on behalf of Mr. Shinseki.

So that leaves the Veteran Service Organizations (VSO’s).

But where are they and why aren’t they calling for President Obama to fire this charlatan along with his co-defendant Donna Beiter?

Instead, the mollycoddle VSO’s will continue to sit on the sideline waiting and playing patty-cake, just like they’ve been doing with the biggest land-fraud scandal in American history at the Los Angeles VA, compounded by some of the most heinous crimes against humanity on U.S. soil — against war-injured and impoverished homeless Veterans.

Thomas Jefferson forewarned: “To remain silent when they should protest, makes cowards of men.”

It’s time to stand up and aggressively protest Mr. Shinseki’s failed stewardship and his abhorrent defiance to honor the law and uphold his Oath of Office.

It’s time to have Mr. Shinseki and his fellow VA bureaucrats investigated, charged and prosecuted with countless crimes because the evidence exposing his Department’s voluminous crime, corruption, incompetence and cover up is overwhelming!

Veterans once held General Shinseki with high hopes and regard as they really believed he would be uplifting and a leader for the greater good.To the contrary, he has now sunk so low that he’s a shameful and embarrassing disgrace.

It’s time for Federal Grand Jury Investigations into all the crime and corruption under Mr. Shinseki’s supervision, including an Investigation by the United Nation’s Human Rights Council for heinous crimes against humanity that include the infamous “death list” torture at the Phoenix VA and exiling tens of thousands of war-injured and impoverished Veterans from the Los Angeles VA and forcing them to live homeless and hungry in deplorable and inhumane conditions.

Question: Are there any no-nonsense patriotic criminal lawyers in America?

If so, they need to stand up and speak out by filing lawsuits against the biggest crime spree in American history.